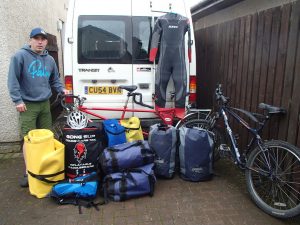 Travelling light. OK, maybe not so “light”.
I was off for 3 days of light training with Patrick for our upcoming challenge next month.
Ok, so the training wasn’t so “light” either.
Day 1 had us out on the tandem bike for a short, but extremely hilly route. This was followed by a short, but very lumpy prone-board session off the coast of Oban. This was Patrick’s 1st time at proning. I thought to myself “I wonder how he will get on with this”, as he shot off ahead of me and was rarely seen after that! 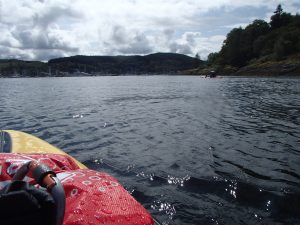 Day 2 had us out on a 16km prone session up and down Loch Etive, being followed for 45 minutes by a very large bull seal, and going over the Falls of Lora, where the water level dropped by around 1 metre. Whilst clinging on for dear life, swearing at Patrick, and trying not to be thrown off my board or spun out by whirlpools, we were cheered on from onlookers above us on the Connel Bridge, all the time Patrick was saying “isn’t this fun Deano!”
Day 3 was a longer and even hillier ride on the tandem, with 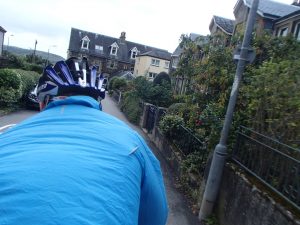 sprints thrown in, and our attempts at standing up while pedalling, (which is much harder than you would think on a tandem!) This was followed by a very lumpy swim over to Kerrera and back, with waves big enough to roll you if you took your mind off your swim for a second.
The day was finished off with a look at the maps and the planning for the challenge. It’s going to depend on the weather, but if it comes off, it should be a lot of fun. “Fun”? 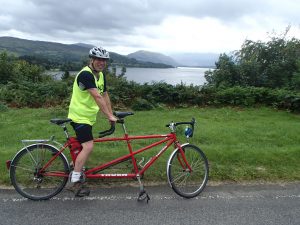 Sorry for the lack of action shots, but there wasn’t much time for that! 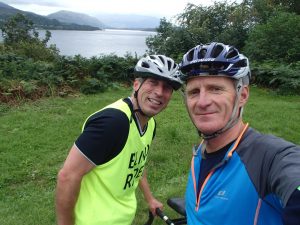