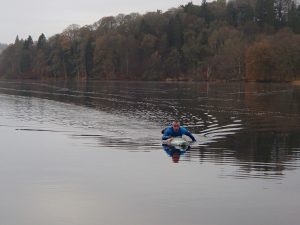 CRASH, CRUNCH, SCRAPE!
Rhona told me that she’d encountered some ice during her swim, and sure enough, as I proned across the loch, I hit the odd thin patch, (no more than a few mm thick). Thinking that this was it, I powered on.
Then on reaching the far side, just as my Endomundo started to talk, CRASH, CRUNCH, SCRAPE, and then my board came to a halt. I’d just proned several metres on to a large ice shelf, several metres wide and about 5cms thick. The noise was so loud, that I couldn’t tell if Endomundo was giving me my stats or shouting “abandon ship”.
I’m glad to say #BarkCommanderStumpy took it well, but not sure how well my inflatable board would have done. (Thoughts of the Titanic come to mind.)
Does anyone know if Bark make ice-breaker boards?
And seriously, can anyone recommend any good winter training prone gloves? My current gloves are OK in cold water, but in icy water… As expected, I lost the feeling in my fingers within a couple of minutes, but again as expected, the feeling returned, (to most of them), after 15 minutes.