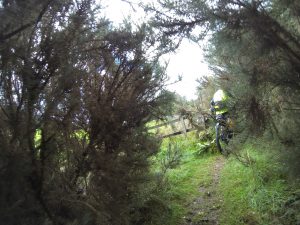 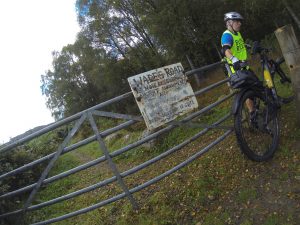 The Great North Trail, the trail that just keeps giving. We didn’t think the trail could get any steeper…
Today’s goal was to do a round trip of just over 40k, to get to the wee hoose, and then back, but the trail Gods were having none of it!
After setting off from FA, the first couple of kms were flat. Then we turned left and uphill. For the next 200m, we were making our way up a very narrow, steep grassy slope, with a dry stonewall on one side, and bramble and gorse bushes on the other. Occasionally they crossed the path, and we just had to push our way through them. 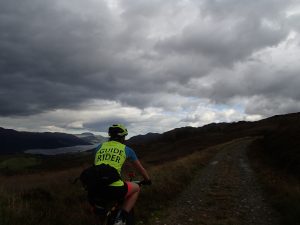 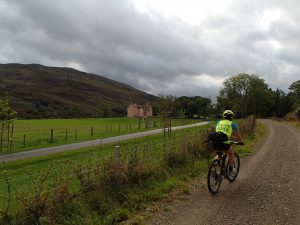 As we came clear of that prickly jungle, we thought we were at the top of the hill. But no, apart from a couple of short bits, the climbing never stopped for the next 14k, and I rarely came out of my easiest gear. Not only was the climbing tough, but we had winds of 25+kmph, and most of this was head-on. With this wind we couldn’t even get any free-wheeling downhill, as even on some steep down bits, if we stopped pedalling, the bike stopped moving. 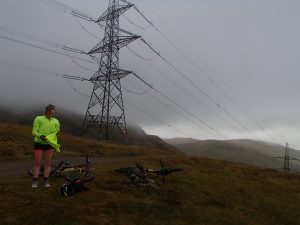 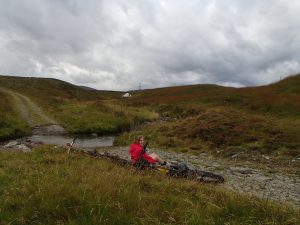 On a short 50m section, the trail changed direction and we had a tailwind, and we flew uphill!
After 3 hours of very hard work, we finally made it to a cairn at the top of the pass. We had climbed over 780m, and taken well over an hour to cover the last 4k. The going had been so tough, that we’d had to get off and walk for about 30 minutes. This wasn’t just due to the steepness of the hill, or the head wind, or the rain, but for the last k the wind had been hitting us from the side, and it was impossible to stay on the bikes. Every time we tried to pedal, the wind would blow us off our bikes. 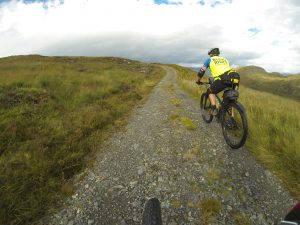 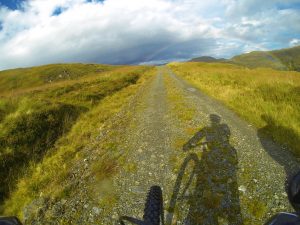 When we finally reached a small cairn at the top of the hill, we decided to cut our losses, and head back. Although we only had another 6k or so to go to the wee hoose, the weather was closing in, and we were really feeling it. The thought of heading downhill for 6k, only to turn around at the hoose and start climbing back up again, was not very appealing. Also, with the bad weather, the light was disappearing quickly, and that was already causing me some sight issues. Turning back, although so very close, was the right call.
For the majority of the trip back, we were free-wheeling down the steep, stony trails we had just come up, and having a great time!

At one point I turned my bike left, and it was like the brakes had come on. I tried flicking the brakes on and off, and then thought I had something trapped in my wheel. But it was that 50m section that on the way up had been a great tailwind. It was now a headwind, and the free-wheeling was over, for this wee bit. 50m later we turned a corner, and the wind was back behind us, and off we flew again!
The 16k uphill had taken us just over 3 hours. The return trip, with multiple stops for photos, changing clothes, etc, took less than half of that!
This was certainly the toughest day so far on the trail, but probably the most rewarding too! Wow, did we feel great when we got back to the van! Another awesome day on the Great North Trail!
#BLINDRIDER #greatnorthtrail #Onemillionmiles