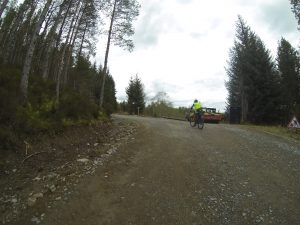 After parking up by a bridge over the River Moriston, we cycled a few hundred metres along the main road, before turning left into the woods.
The path here was really good, and relatively easy for me to follow, so I took the lead.
After 5 minutes on this big track, we turned left and the big clear track, became a tiny, invisible track to me. Rhona took the lead, and for the next 40 minutes I could see virtually nothing.
Rho wears a bright yellow vest for me to follow, but 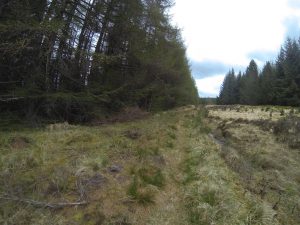 unfortunately, for much of the next 30 minutes the flora and fauna contained matching colours. The only thing I could see was the white flashes of Rho’s trainers as they went up and down on the pedals, just a couple of metres ahead of me. The track and the surroundings blurred into one big mass, and I had to just focus on the white flashes, and try to keep directly behind them.
As well as poor visibility, (for me), the track was fairly technical, but regular. We would go forward and up for around 20m, then we’d cross a wee burn, and a couple of metres later we’d hit an almost vertical section for about 3 or 4 metres. 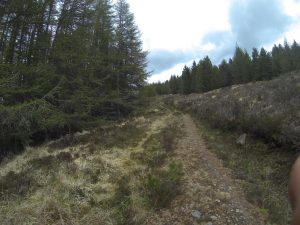 It was like going up a massive outdoor staircase. All the time Rho would be shouting instructions over her shoulder, “burn, I think we can bike it”, or “burn, I’m walking this one”, then “step”, “flatish”, and repeat.
After 30 minutes of this, the steps stopped, and it was now a very slight incline. However, the track was fairly overgrown, so we were constantly being whacked by small trees and bushes that had encroached onto the trail. There was also a small rocky river crossing, where we decided walking was safer than biking.
At a little over 6km in, we re-joined the big clear path. 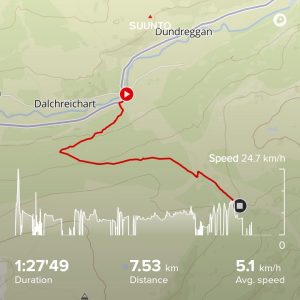 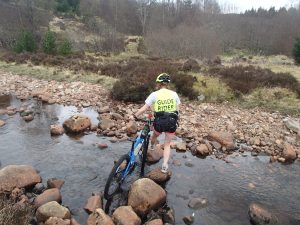 We were now out of the trees and the wind was very welcome, drying our sweat-soaked clothes.
The last km was a gentle climb, (it’s all relative), to the top of the hill, where we’d turned around to go back down the other side, just a few hours earlier.
Rho found a slightly shorter route back down, on a big path. Normally we’d go back the way we came, but as my eyes and head were starting to buzz after all the concentration from the uphill, and we still had another 3 days of 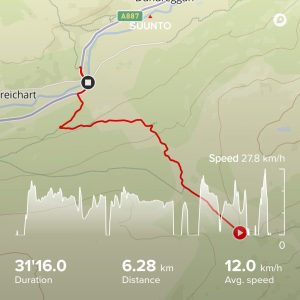 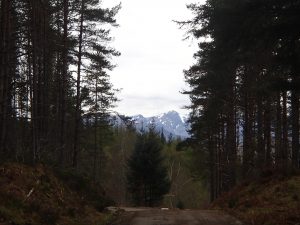 biking to go, we decided to take the big track back down. (In the past I’ve tried to push through this type of issue with my eyes, but this has often resulted in me losing my sight totally for several days, hoping that it will return.)
The bike trip back down took a fraction of the bike up!!
Yet another awesome ride on the Great North Trail!
#BLINDRIDER