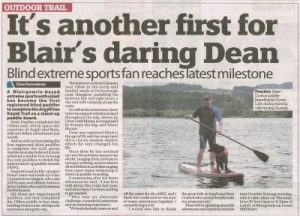 A Blairgowrie-based extreme sports enthusiast has become the first registered blind paddler to complete the Argyll Sea Kayak Trail on a stand-up paddle-board.
Dean Dunbar completed the 150km trail, which spans the coastline of Argyll and Bute, with two fellow adventurers last month. And as well as Dean being the first registered blind paddler to complete the trail, group members are also believed to have achieved a double first by being the only paddlers to finish the trail on stand-up paddle-boards (SUPS).
Inspirational public speaker Deans team was made up of Ian Cormackfrom Glasgow, who runs SUP Ecosse, and Allistair Swinsco from Carlisle who runs Northwest Paddleboards.
All three are experienced paddlers, and they completed the 150km paddle in four days, battling headwinds, whirlpools and waves along the way.
The team set out from Ganavan near Oban in the north and headed south to Helensburgh near Glasgow, paddling for between five and eight hours a day and wild camping along the route.
As well as the water team, there were two support vehicles on land throughout the trip, driven by Dean’swife Rhona, accompanied by Stumpy the dog, and Alison Rennie.
Dean was registered blind at the age of 29, and two years later did a charity tandem skydive which he says changed his life.
Since then he has notched up over 80 activities around the world, ranging from adventure racing to zorbing, and set almost 20 world firsts in activities ranging from open-water swimming to stand up paddle-boarding.
Commenting after his latest adventure he said: “I was first told about this route last year, and since then I’ve been waiting to get started.
This was an awesome challenge, a wonderful adventure and an amazing experience.
“We had a fantastic team on and off the water for the ASKT, and I think this could well be the start of many adventures together. I certainly hope it is!
“I would also like to thank the great folk at Argyll and Bute Council who were so helpful with our preparations.”
Dean will be speaking about his adventures and experiences at the next Growbiz Xchange meeting, which takes place on Thursday June 30 from 6pm to 8.30pm at Laird’s of Blairgowrie, Lower Mill Street.