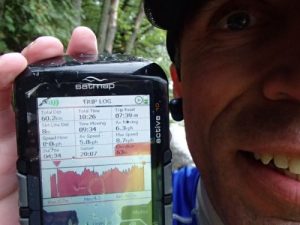 In preparation for our October SUP challenge, Carl recently upgraded from his 10ft 6in long and 33in wide Fanatic board to a 14ft by 27in Red Paddle Elite inflatable board.  Along with his new Snell Brothers paddle, he had certainly upped his game.  On the 10th of July I became the first of our wee group, (Carl, his brother Jason, and me), to do a 20km paddle.  So imagine my shock when Carl told me last Friday that he had just paddled 40km!!  The challenge was on.  Today I decided I was going to match his 40 and try to raise him by 10.
The weather was atrocious, with wind, heavy rain, and the odd storm on Clunie Loch.  (I’m told that the storm was the last hoorah of Hurricane Big Bertha.) As if that wasn’t enough, 2 muppets in a speed boat tried to knock me off my board.  The first time they passed within 2 foot of my SUP, but then an hour later they came back for another go.  This time they came from behind and were an inch or maybe two from my board.  Just to add to their fun, they then turned sharply in front of me, catching the nose of my board.  Bloody idiots.
After all of that, weather, dickheads, etc, on my wee 12ft 6in by 30in board that I bought from Oceansource.net, I was on the water for around 10 hours and knocked out 60km!  I’ve no intention of attempting to top that this year!