BLIND THRILL-SEEKER ON BOARD TO PADDLE SEVEN LOCHS IN WEEK 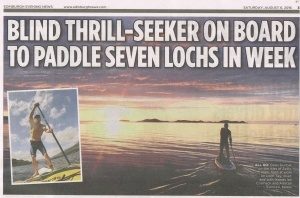 Dean to cover 136 miles on the water in epic challenge
IT started as a way to raise money for a school video camera, but has become a lifelong passion for one Edinburgh-born adrenaline junkie.
Dean Dunbar has taken part in hundreds of white-knuckle challenges around the world, a feat which is all the more incredible considering he is registered blind.
His latest challenge sees him attempting to paddle-board seven lochs – dubbed the “magnificent seven” – in seven days, starting on Monday.
He will cover 136 miles on the water as he tackles Lochs Lomond, Awe, Shin, Ness, Shiel, Erricht and Tay, alongside long-time partners Ian Cormack and Allistair Swinsco.
The former Wester Hailes resident says he understands the dangers of the task facing him.
“Tiredness will be the main issue,” he said. “One or two of these on consecutive days isn’t too bad, but when it gets to four, five, six . . . that’s when you get tired and fall in.
“Then you’re too tired to swim, or you get a stitch and you can get into real trouble.”
Now 47, Dean noticed his sight getting worse aged nine and, despite being told it would return by age 20, was diagnosed with cone-rod dystrophy at 27, becoming registered blind.
However, a charity skydive in 1998 – in order to raise money to buy a video camera for the school he was working at – changed his life.
“It wasn’t really something I’d considered before,” he said.
“I had to do a tandem one, but from the moment my feet touched the ground I was hooked. Nothing compared to that feeling and then it was just seeking out new opportunities and finding people who were willing to let me try them.”
That proved difficult as many companies refused to support him, but Dean persevered, establishing the popular website extremedreams.co.uk.
“It was incredibly frustrating,” he said.
“Nine out of ten people I spoke to were fine right up until they found out I was registered blind. I was so desperate to get another rush that I had to find somewhere that would let me try things out.
“That’s part of the reason I started the website, to kind of give a nod to those companies who catered to my needs.
“I think now they are much more receptive of me and if they have any doubts they can check it and see what else I’ve done.”
The adrenaline junkie holds several records including being the first registered blind person to bungee jump from a helicopter and has encouraged others in his situation to follow their passion, whatever it takes.
“I’ve learned your only limitation is yourself; if you have something you enjoy, that you’re passionate about, there’s no harm in going out there and chasing your dream.”