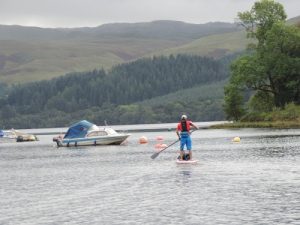 Setting off from Torran Bay

As this was to be my 4th full length of Loch Awe, I had decided I was going to aim for a personal best.  The weather was looking great, not too warm, with almost zero wind, and from my last Loch Awe paddle with Allistair and Ian, Allistair had given me a tip to help me cross the arm that heads west, near the norther end.  (More of that later.)
The first time I paddled Loch Awe was back in December of 2015, and this had been a solo job.  Apart from paddling between weather warnings, getting caught in a sleet and hail storm, and getting lost, it had been a successful trip.  (Success is in the eye of the beholder.)

My next 2 paddles, in July and August of 2016, had been with fellow paddlers, and long term partners, (that is what a newspaper article once called them), Ian Cormack of SUP Ecosse, and Allistair Swinsco of Northwest Paddleboards. On both paddles, we took our first break of the day in the shelter of an island.  This was 5 miles from the start, and was after paddling for an hour.  Today, I was hoping to pass this island before the hour was out. Did I?  Who knows, I never saw it!

I took my first break after 90 minutes, and then each of the next ones were an hour apart.  I had also decided to wear a water bladder on my back, as everyone tells me that I never drink enough.  (1 ltre of fluids for every 5 hours of paddling sounds right to me?)

Halfway between my first and second break I got lost.  (This was not to be the last time.)  The loch just seemed to end in front of me, and I couldn’t see where the water had gone.  About 50m from hitting land I noticed the loch went off at a right angle, and I was prevented from crashing! As I followed this stretch, I heard the sound of a speed boat around the next bend.  It sounded like it was going fairly fast.  As I rounded the bend, and probably came into sight of the pilot, the boat picked up it’s revs and went even faster. 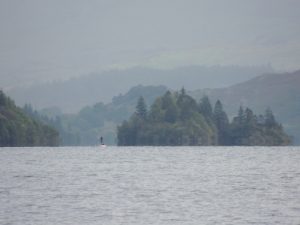 Not far to go

“Thanks a lot buddy”, I thought, thinking this was going to create an almighty wake.  I stopped paddling, wondering whether I should show my appreciation with 1 finger or 2.
As I tracked the boat’s progress, I worked out that it was at my 12 o’clock.  Then at my 1 o’clock, then at my 2 o’clock, and then up in the air!?!  It was a sea plane, and he was revving up so he could take to the skies.  Wow!! He took off at what sounded like less than 50m away from me. I changed my salute, to 5 fingers, waving him off, and feeling like a kid again.
Just as he took to the air, a jet fighter flew over, in the opposite direction, and I felt very privileged to experience my very own air show.

As I mentioned, the wind was almost a zero. Rhona and I were staying at a wee cabin, a mile south of Portsonachan, and as I turned the corner a couple of miles south of this, the wind arrived.
It was almost a tailwind, so it wasn’t a problem. For the next couple of hours I headed north, with the wind stopping and starting all the way.
As I approached the west leading arm of the loch, I started thinking about Allistair’s last paddle, where instead of like Ian and I, who got hammered by a cross wind, Allistair had paddled a short way down this arm, and then used the wind to blow him up it and out at the other end.

I knew that there was a wee island that he had ducked behind, to head down the arm.  After 2 failed attempts, and a couple of extra kms, I found the right island.
I ducked down behind it, trying to avoid little black lumps in the water.  (I don’t know if these were either rocks sticking out of the water, or just the black side of some waves.  They seemed to appear and disappear.  But with my crap eyesight, I wasn’t going to take any chances.) 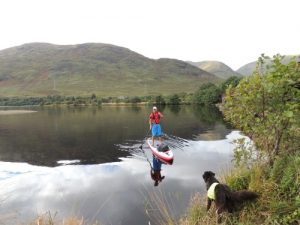 Commander Stumpy welcoming at the end

I went down the arm and then across it.  This whole section took me just 15 minutes to cross, and going by talking clock, it looked like I might just do a sub-5-hours Loch Awe.
As I reached the far side I headed up the arm looking for the bed on the shore.  However, after about 10 minutes of paddling, I came across a bridge.  (When I say I came across it, I actually ran aground next to it.)  There had never been a wee bridge at this point in the past.

I could hear cars travelling along the road on my left, and worked out that I had gone right across the whole loch.  I turned around and made my way back down the loch, looking for the gap which would take me to the end.

20 minutes later the gap had still not appeared.  I noticed that the road was extremely busy, which shouldn’t be the case on the east side of the loch.  (It’s a quiet wee road.)  This probably meant that I was alongside the Oban road, and I was heading off in the wrong direction.

To cut a very long story short, I paddled up and down this section several times trying to get my bearings.  I even called Rhona on the walkie-talkie to ask her if she could see me on the Spot Tracker, but it just kept saying “no satellite coverage”.

After an hour and a bit of paddling up and down, and then me going ashore trying to work out where I was, I took a chance and paddled under this bridge, trying to keep the sun to my 7 o’clock.
I ended up spending 5 hours and 57 minutes on the water, but eventually made it to the end.

It was a great wee paddle of just under 42km, and as this is in part training for the upcoming Great Glen Challenge, and for next years’ 11 City SUP, I thought Joanne Hamilton Vale, (who will be guiding me on the 11 City), would be proud of me, as like her on the last 2 11 City, I got lost too!