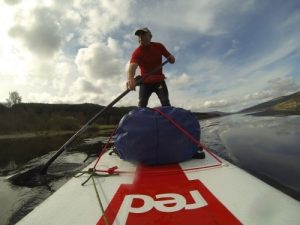 The original plan had been to do a double double Loch Tummel, (is it just me, or does that sound like a line from Macbeth?), 40km, in under 7 hours, but with a late start on the loch, no time for breakfast, and plans for a social paddle with Rhona and Wendy that afternoon, my new plan was to aim for 34km in under 6 hours.  With the “Fuel of the Gods”, I may just succeed!
My 1st fuel break was at Pablo’s Hideaway, at the top of the loch, where I took on 4 buttered oatcakes and a mouthful of squash.  Feeling strong I turned around and headed back down the loch.
At Fake Island, (17km), I turned around and headed back up the loch, but this time it was starting to feel a bit tougher.
20 minutes later I stopped for my 2nd fuel break – more oatcakes and squash.  With the hot sun and almost zero wind, I stripped to the waist and made my way back up towards Pablo’s.
By the time I reached Pablo’s I was beginning to flag.  There was no KFC in sight, so there was nothing for it.  It was time to break open the box marked “Fuel of the Gods”.
The 3 big mouthfuls of mixed nuts and raisins, the Tunnock’s Caramel Wafer and the Swizzels Refreshers bar, (original lemon flavour),  hit the mark.  “Give me everything you’ve got Loch Tummel!!” I screamed. 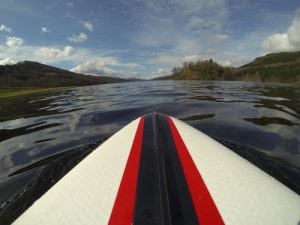 Heading back up the loch, ready for my 2nd fuel break

The 3 witches of Tummel must have heard my cry, because as I sat there taking on fuel, the forecasted headwind of 5mph started up.  By the time I was ready to head back down the loch, things were getting a tad chilly.  I put on my t-shirt, stood up, and was instantly blown backwards 20m.  With a couple of strong strokes, I stopped going backwards and started moving forward, with the board riding over the incoming waves.
It was certainly bumpier now than it had been all day.  The nose of my board was crashing through waves and slapping down over others, and I was getting soaked.  Awesome!
I had been paddling hard for a few minutes when I noticed something off in the distance to my 1 o’clock.  After staring at it for a few minutes I realised it was some wee sailing dinghies.
The wind picked up and was now a head wind of around 10mph, and the going was tough.  But now I could see these wee, white shapes off in the distance I had a plan.  How long could I keep them in sight, before they disappeared?

I dug deep and powered hard, slapping over and punching through the waves.
Five minutes later and the white triangles were getting closer.  But when I stopped for a second, they got further away from me.  I had not just been keeping up with them, but was starting to catch them.

Another 5 minutes and I was level with the closest dinghy.

With the buzz of catching them and the glorious Fuel of the Gods I had taken on board, I was buzzing off my head.
Within another 10 minutes, not only had I caught them, but if I had had a rear view mirror, (and wasn’t blind), I would probably be seeing them in it.
What a buzz.  For 30 minutes I had sprinted into a 10mph headwind, and done my fastest speed of the day, (8.2kmph).
40 minutes later I met up with Rhona and Wendy for a more relaxed paddle around Loch Tummel.
I had done my 34km, with 15 minutes to spare.  So hopefully my 40 under 7 is within reach!