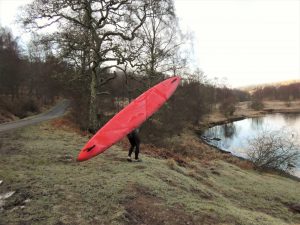 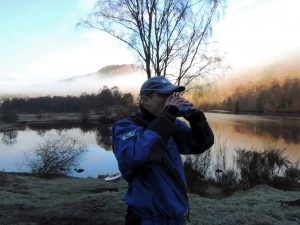 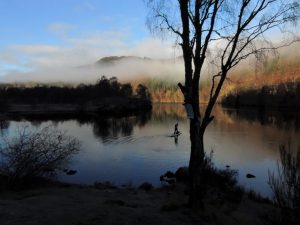 Todays’ fun and games began before we even hit the water, and then during the paddle I had the most wonderful experience.

To give us an early start, I put my Red Paddle 14’ on the bus roof yesterday, (in the snow).

Our early start was slowed down after it took 30 minutes to get into the bus and then clear the ice from the outside and inside!

At Tummel, (-2 degrees), the rope I had tied the board down with had frozen solid.  After 10 minutes of wiggling it, (it’s not the length of your rope, it’s how well you wiggle it), I started to undo the knot.

With the ice covered board on the ground, we couldn’t get the fin in the box, as the snow that had fallen the previous day had now turned to a block of ice in the fin box.

After another 5 minutes of de-icer and warm water, we were in!

As part of my TOP SKRET mission later this year I was trying out my Palm Sidewinder drysuit, given to me by my great friend Patrick Winterton.  This was great for the first 25 minutes, but then I had to pull over on to “Camp Island” to disrobe.  It was like a very smelly sauna in there!  Back to my normal kit of Palm Itunda and Blaze neoprene trousers, I was ready for proper paddling.

The highlight of the paddle came an hour from the end.  As I was paddling I saw some movement out of the corner of my eye.  I stopped paddling as 15-20 geese flew across in front of me.  I initially thought I was looking at their reflection on the water, but soon realised that it was the actual geese, at just above knee height.  By the time the last goose passed across in front of me, they were about chest height, and close enough to touch!  In fact they were so close that if they had done a poop, I’m sure it would have landed on the nose of my board.  (That reminds me, I must check the nose of my board!)

Awesome day on Tummel, as usual.