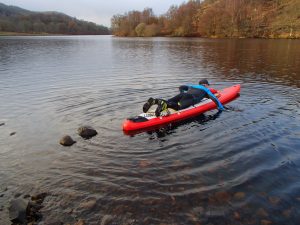 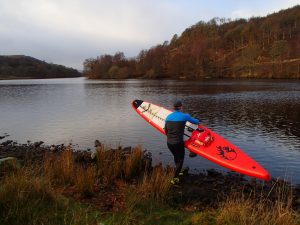 The calm before the storm, (literally!)

The forecast had been for up to 15mph winds, but as I set off the wind was almost zero.

5 minutes after these pics were taken, the wind increased, and the rain came on.  40 minutes later the winds were big and the waves were bigger, reaching over 1m high.  This may not sound that big, but when you’re lying on your board, just 10cm above the water, 1m is very high.  The waves were crashing over the top of me, rolling down my back.  Every time I brought my head up to get a breath, I ended up with a mouthful of Loch Tummel.

At 5km into the paddle, I decided it was time to turn back, as the conditions were getting worse.  But with there only being a couple of metres between each wave, I had to turn quickly.  If I didn’t, I’d be rolled over, and no doubt would be taking a swim in this chilly, messy loch!

Fortunately I turned in time and started to make my way back.  The home trip wasn’t much easier, being chased home by ever growing white topped waves.  Each one threatening to throw me off my board.  At one point I was forced onto a beach and had to do a short portage to get past the worst bit.  But carrying the board was almost impossible in these strong winds.

These conditions are probably the most challenging I’ve had on my own, on my prone board, and many lessons were learnt.  The main one was that I need to get better at proning!