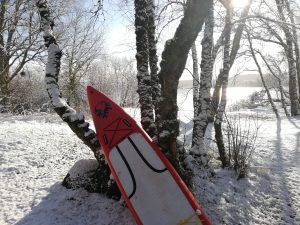 I finally got it up and it was AWESOME!
A couple of months ago Allistair loaned me his small inflatable Gong wing. Due to either lack of wind, or too much wind with Storms Dennis, Ethel, and Co, I hadn’t had a chance to try it out.

Today, apart from a wee bit of snow, the conditions were perfect.
I was at Loch Rannoch with Piotr and Georgina. They were kayaking and I was proning.
With winds of 9mph, and gusts of 12+, the loch was very lumpy. We launched just over half way up the loch, with the goal of travelling 3km to the end of Loch Rannoch into the wind, before turning around and using the wind and wing to get back. 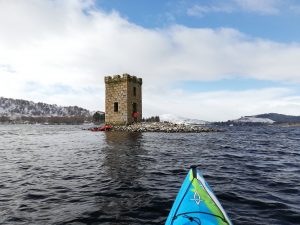 En route, whilst trying to stop my hands from freezing, I stopped at the wee island to look at the tiny tower. (This had been used as a prison for cattle rustlers and the like, back in the day.) 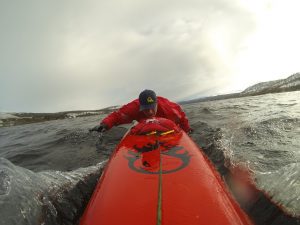 Then it was back into the freezing waves. 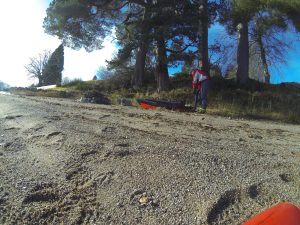 At the end of the loch I inflated the wing, and Piotr helped get me back out on to the water and into the wind. 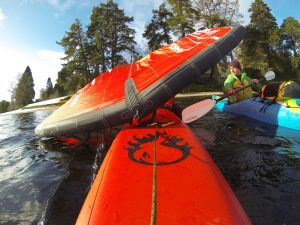 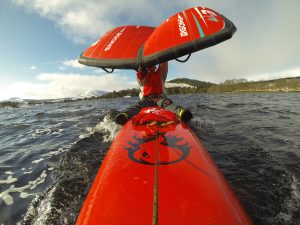 from seeing where I was going. He then laughed, realizing who he was speaking to, and said, “that shouldn’t be a problem for you!”
For the next 2.5km, I whizzed down the loch, feeling my way around the wing and trying to steer myself.
On a couple of occasions, whilst turning, the board almost flipped over, but somehow I managed to stop it just before it went too far. 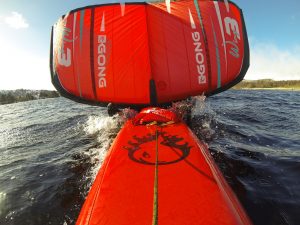 On other occasions, the board was going so fast, that the section of the board on which I was sitting went several inches below the water, and I was up to my waist in it.
Fortunately I had made the dicision at the start to sit on the board, as opposed to kneel on it. As the board is only 22 inches wide, I 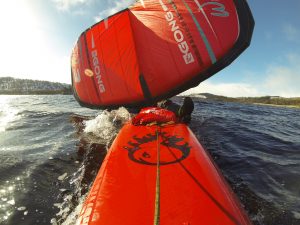 thought I could use my outstretched legs and feet as stabilizers. This soon proved to be an excellent idea. I think if I had knelt on the board, I would have soon been in the water! 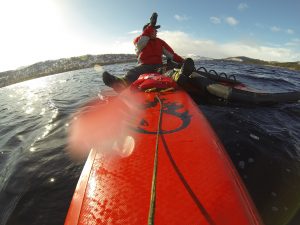 15 minutes after I started this run, I heard Piotr shouting off in the distance. He said that I was about to pass our exit point, so I lowered the wing and waited for him to catch up. 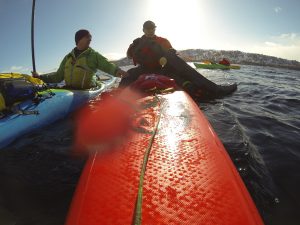 Once I had deflated the wing, Piotr helped me roll it up and stash it between my feet, as I proned the last 100m back to the shore.
What a fantastic trip! Thanks Piotr, thanks Allistair, thanks Loch Rannoch! 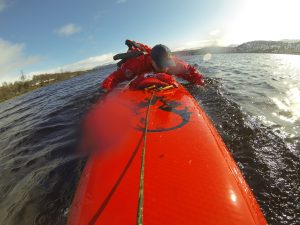