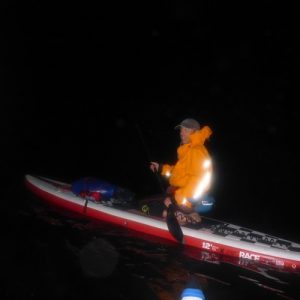 At 8 o’clock this evening I was having a shower, when I realised that my last shower had been exactly 36 hours ago.
Since that shower, my wonderful wife, Rhona Dunbar, had driven me over to Loch Awe, where I met up with Allistair S, (North West Paddleboards), and Ian C, (SUP Ecosse), and we then attempted a SUP first.  We hoped to be the first people to SUP the longest loch/lakes in Scotland, England, and Wales, (Loch Awe, Lake Windermere, and Lake Bala).  Not only did we hope to be the first, but we aimed to do it in under 24 hours.

With Alison R, (North West Paddleboards), supporting us along the way and getting us from each location, we managed to complete the challenge in just under 19 hours!
Now standing in the shower, I realised why I was feeling a bit tired!
Thanks for an Awesome weekend.  We had a truly Winderful team.  And Balacks to anyone who said it couldn’t be done!
Full article CLICK HERE.