You may well have heard of the “3 Peaks”.  It’s a challenge in which walkers have to climb/walk the highest peaks of Scotland, England, and Wales.

Well, the “3 Lakes” is the SUP version.  Our goal was to paddle the longest loch and lakes of Scotland, England, and Wales.

We had heard of a couple of people who had talked about doing something similar, but for some reason they had chosen Loch Lomond instead of Loch Awe.  Loch Lomond is 39km or 24.23 miles long.  Definitely not the longest loch in Scotland. 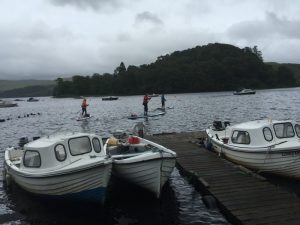 Also, what we had heard was that those people had planned to do their 3 lakes over several days.  Like the “3 Peaks”, our goal was to get all 3 done in under 24 hours.  Was this a Mission Impossible!?!

For our mission, “The 3 Amigos” were back in action.  We were going to use the same team as we had for the Argyll Sea Kayak Trail.  Ian C from SUP Ecosse, (who came up with this challenge), Allistair S from Northwest Paddleboards, and me, (well, you know who I am).

Like with the ASKT paddle, Alison R of Northwest Paddleboards would be supporting us on land, and getting us to each location, and my gorgeous wife Rhona, and Commander Stumpy, would support us on Loch Awe and then pick me up the following day, back in Scotland.  (She’s not allowed across the border, but that’s another story.)

The date was Saturday the 16th of July, 2016.  Mid-Summer.  We left the shelter of Torran Bay and entered the wilds of Loch Awe at 15:00.  The south of England was experiencing a heatwave, and we were about to paddle into 28-41kmph winds, rain, and very messy waves. 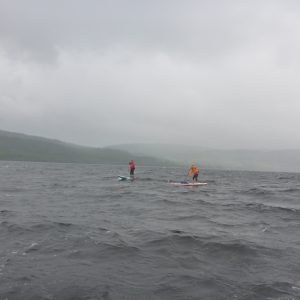 For the next 5 hours, or so, we battled our way north towards Kilchurn Castle.  These strong winds never seemed to ever get right behind us.  One minute they would be blowing over our right shoulder and then they’d be on our left.  We tried to get shelter where we could, but this was not always possible.

Towards the top of the loch, there is a large arm of the loch that comes in from the left.  As well as the water joining us from the left, so did some mighty winds and waves.  This short 1km crossing took us over 30 minutes to cross, and not a word was spoken.  The waves were messy and we all felt that it was just a matter of time before we were knocked off our boards.

Eventually after 5 hours and 7 minutes of paddling, and a handful of short fuel breaks we arrived at Kilchurn Castle.  Lake number 1 was done. 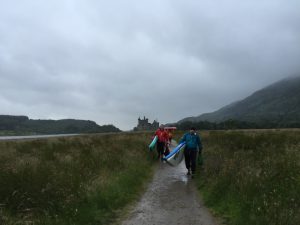 After a short break of around 30 minutes – for hot food and drinks, to change into dry clothes*, and packing everything away – we all piled into the car for the 245 mile drive south to Lake Windermere. 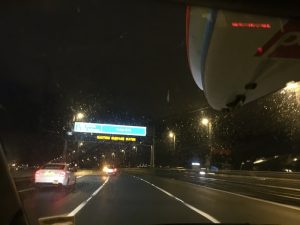 At 02:49, we hit the water on Lake Windermere and paddled off into the darkness.  We all had chem-lites on our boards, and for the next hour or more, I paddled behind Ian and Allistair, trying to follow their lights.  There were several obstacles in the water that the lads described to me, but I didn’t see a thing. 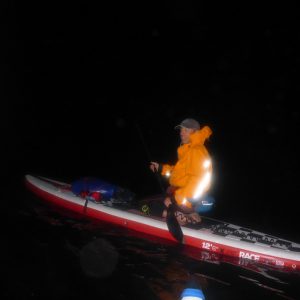 Deano getting ready to stand up and paddle off into the darkness – Photo courtesy of Ian, SUP Ecosse

After about an hour and a half, daylight started to dawn, and it was glorious.  The water had been, and remained, very calm, and we had the lake to our selves.  What an awesome experience.After 2 hours and 34 minutes of paddling, lake number 2 was done.

Again, with no real rush, we changed our clothes, got some food and packed away our kit.  It was then off on a 154 mile drive down to Bala. 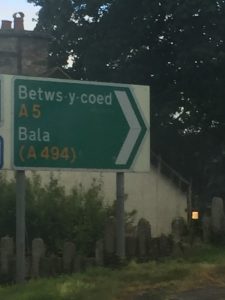 We arrived on the shores of Lake Bala just after 08:30 and got ourselves ready.  At 09:00 we started our paddle.

There was a reasonable wind on Bala, and we cruised this last lake, lake number 3, in 41 minutes. 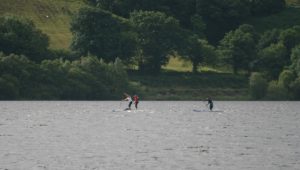 I’m sure this trip could have been done much quicker if we hadn’t had to deflate one of the 3 inflatable boards and had just eaten our food in the car, but we wanted to enjoy our adventure.  Isn’t it strange how the word “enjoy” can be mistakenly used! 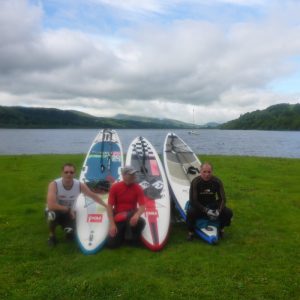 *Some people’s clothes were wetter than others.  As always, I won’t mention the name of the only person who took the only dip of the whole challenge, but will say that I learnt not to put hard boiled eggs in the front pocket of my Palm cag, as I discovered they don’t last very well when climbing back onto your board after falling off!

As always, many thanks to Palm Equipment Europe and Red Paddle for their support.