The Nevis Highwire Bungy is one of AJ Hackett’s sites and at the time of writing was the highest static bungy jump site in the world.
The jump station is suspended between two hills, with several thick steel cables. To get out to it, you have to take a short trip in a small cable car. From here you leap a massive 134 metres down towards the Nevis River rushing along below you.

This was my second bungy jump of the day. The first had been an easy 43 metre bridge bungy jump. Now it was time for the big one! 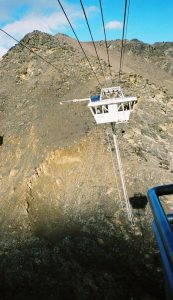 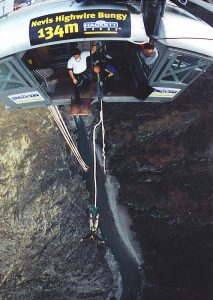 This meant that I was going to spend about half an hour in the jump pod, watching everyone else jump before me. I wasn’t nervous beforehand, but after watching the first few jumpers, especially the scared ones, my nerves began to rattle a bit!

After the usual safety talk, it was time to stand at the edge and get ready to go.

Before I knew it, I was plumetting down towards the river. The free-fall lasted around 8 seconds. 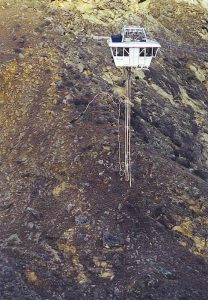 It was a spectacular jump, in spectacular surroundings. This has got to be the best static bungy jump in the world, and a must if you are ever in New Zealand! The Nevis Highwire Bungy jump pod has a glass panel in the floor, so even if you don’t do the jump, you can get an amazing view of the bungy jumpers! 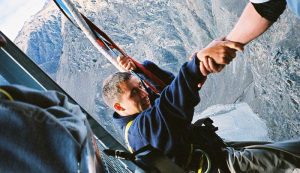