At the end of 2014 SUP (Stand Up Paddle-boarding), had taken over my life, and I decided that I would not be doing any big swims in 2015.  Then in May 2015, I received an email from Ann, (one of the organisers of the Lamlash Splash), telling me that entry was now open.

The Lamlash Splash is one of the best open-water swimming events around.  It is small and extremely friendly, with a maximum number of 40 swimmers doing the 1.3 mile, (2.1km), sea swim from Holy Isle to Lamlash, on Arran.  I had swam it in 2013 and 2014, with the help of my swimming guide Eddie “the socks” Riach.

Being strong of mind and even stronger of will, when the email arrived I instantly crumbled and entered! 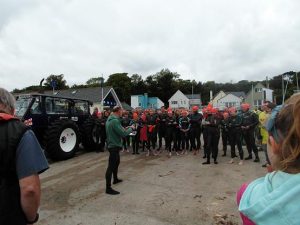 Due to heavy training sessions on my SUP, I wasn’t able to get my first training session done until July, where I did my first mile of the year.  (My last mile long swim had been in a pool, back in December of 2014.)  The water was a tad chilly, but apart from that the swim was pretty comfortable.  I knew that I wasn’t going to break any records, but I hoped that I wouldn’t embarrass myself either. 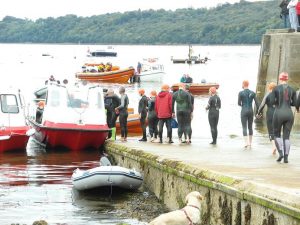 Catching the ferry to Holy Isle. (Spot Eddie the socks by the ferry.) – courtesy of Andrew Milton

Rhona and I also managed to get 3 training sessions with some of the local swimmers, over the week before the Splash.  These were great, and got us used to both the water temperature and the jellyfish.  (I was stung on my feet around 10 times, but was pleasantly surprised to find that they weren’t much worse than a nettle sting!)

On the day of the Splash, I bumped in Roy Armstrong, (my arch-nemesis!!)  I had swam with Roy several years ago in my local loch.  I thought I was pretty good at the time.  Then Roy arrived to swim with me, but was suffering severely from a hangover.  This should be an easy swim I thought.  Wrong!!  Even with a hangover, I couldn’t keep up with him. 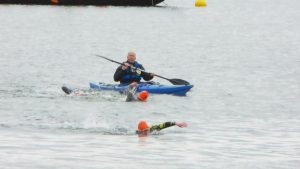 Then I met him again in 2013 at the Lamlash Splash, where as expected, he trounced me.  Then in 2014 I beat him by about a minute or so, which was a total shocker.  This year the world was put back in order, and Roy beat me.  When I got onshore, he told me that he had been there for 5 minutes.  I have since seen the result, and it was only about 10 seconds.  But still, a win is a win!!  I’ll see you next year Mr Armstrong! 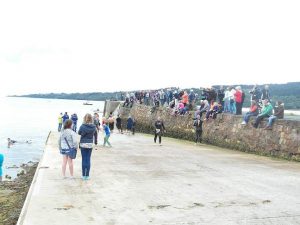 Last year, when Rhona did her first Splash, she finished at the same time as Ann Hart, (one of the organisers).  As you can see from the photo, history was repeated in 2015. 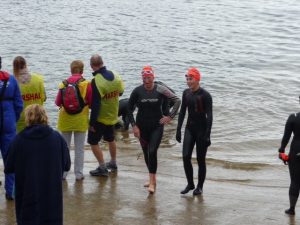 Ann and Rhona finishing at the same time, again!

As always, a great time was had by all.  Thanks go out to my guide Eddie “the socks” Riach, and my safety kayaker, for the 3rd year, Gary Wilson.  Also thanks to the locals for the great wee swims in the week before the Splash – Ann, Heather, Georgina, Zabdi, Eric, Mike, Paul, and also to John C, who will hopefully be joining us for 2016.  See you there!