In early 2006, I received an email from Fiona Pascoe of Thundercats, requesting a link swap to their website. Along with the link request was an offer to come along and give it a try. Within a few days, this trial had turned into a “round the Isle of Wight record setting challenge”!! As you know, I’m just a guy who can’t say no, so things were set in motion. The date was set for Thursday 24 th August, 2006.

We discussed the plans and agreed that as I had never driven a Thundercat, (or any other powerboat), I would need to do some training. Not only would they organize the training, but they would give us somewhere to stay!! This was just the beginning of the generosity shown by everyone involved! 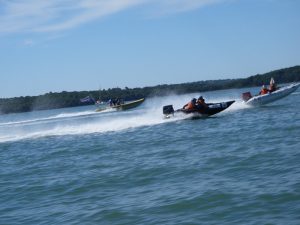 We flew down to Southampton on the Monday and were introduced to the whole team as well as the Thundercat. I had seen pictures of the boats, but because of my limited sight, I couldn’t see too much. The Thundercats are 4.2 metre long, inflatable catamarans. And hang on, there was no steering wheel!! Instead, there was a 50 hp outboard motor on the back and this is what I was going to use to drive the boat. Along with the rest of the team, I was introduced to Vee. Vee was to be my co-pilot (not sure if this made him a very brave man or just very stupid). Vee was not just a co-pilot, but the owner of the Thundercats. He talked me through the basics and we arranged to meet the following morning, on the water to give the boats a wee run.

On Tuesday morning we were taken to the slipway and got our first taste of what the cats could do. Vee explained that the easiest way to communicate commands were to stick to just a few words and go from there. Left, right, wash, and off. Left and right, meant that I had to push the tiller in the opposite direction. Wash meant that we were heading into the wash, (either the wash/wake left behind a passing boat, or some good sized waves). When “wash” was called, we were to jam ourselves into the cat and get ready for the bump. Off meant that the wash was big, and that I had to cut the power. If I didn’t, we could end up airborne and tipping over. 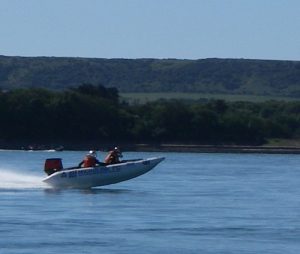 After the safety talk, Vee drove us out of the 6 knot speed zone and into the open water. Now it was my turn to take control. I assumed the position, back against one tube, feet in the loops on the opposite tube, left hand on the throttle and right hand holding on for dear life to the safety line along the side of the Thundercat. With a slight rotation of the throttle we were off!! Starting off very slowly and picking up pace as the day went by. By the end of Tuesday we had reached a top speed of 47 mph, with me driving!!

Wednesday started off with a few short runs around the estuary, and then off into the big water. This was going to really put me to the test. We were now wearing open-face helmets and had our comms in place. The plan was to head over to Cowes, on the Isle of Wight and get a feel for some lumpy water. Vee spotted some good size waves and directed us into them. Left, right.. left, right, off, on, off, on, off, woosh, crash, power on!! We had just hit some massive waves, and according to the guys in the safety boat, we had come right out of the water, landing back down on one corner of the boat. They were convinced that we were going over, but with Vee’s skill, he positioned his weight in the right place and we hit the water and were off again, as if nothing had happened!! Wow!! I found out later that Vee had deliberately directed me into this big water, to show me what the boat could do and increase my confidence in both the Thundercat and our combined skills. 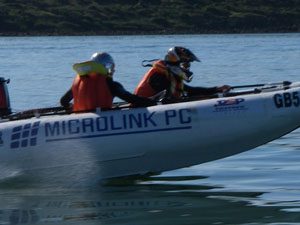 The big day had been planned for Thursday, but due to bad weather, this was postponed until Friday morning.

On Friday morning, Vee picked Rhona and I up and we headed over to Cowes, on the big Cat Ferry. We then met up with the others and got ready. At around 09.30 we took the Thundercat out for last minute photos, etc.

As well as our white Thundercat, there was a black Thundercat and 3 safety boats following us. We were about to cover a distance of over 60 miles and estimated it should take between 2 and 3 hours. If we could get around in 1 hour 40 minutes, that would be amazing. 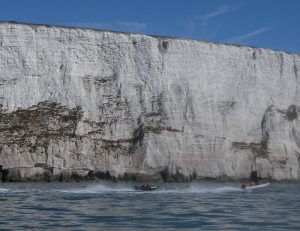 At around 10.00 we were all set to go. Helmets on, comms working, stopwatch ready, and we were off. I grabbed the throttle, twisted it slowly until it wouldn’t go any further. “Slight left, slight left.. slight left.. perfect.” Over the next 60+ miles Vee directed us through obstacles including waves, troughs, shallow water and rocks. I have very little recollection of much of the trip, as I spent the whole time listening for Vee’s next command and trying to react to it in time. With the roar of the engine, an arm’s length away from me, it was very hard to hear Vee. So I had to concentrate very hard. We hit a few bumps, some of them dislodging us from our positions in the boat. After 40 minutes my throttle hand was starting to struggle holding the throttle in place. I had to keep reaching over with my right hand to turn the throttle to full power and then anchor my left hand on to it. St Catherine’s Point proved to be quite bumpy, but nothing compared to Wednesday’s lumps!! 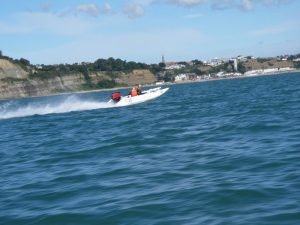 Around 15 minutes from the end our comms failed. We had to stop the boat and shout to each other to put a new plan into action. The new plan was for Vee to hit my right hand for us to go right. This meant turning the tiller left. He would grab my left knee for me to pull the tiller right and hit my right knee for “off”. If he grabbed my right knee, I was to keep power off until he released his grip. All clear? As mud!! I managed to get the first 2 commands wrong, but all sorted after that. 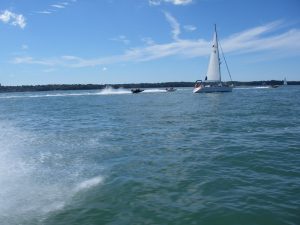 Less than half a mile from the finish line, a big powerboat came from our right. He obviously saw the five boats all charging along together, and although it was his right of way, he stopped to let us cross in front of him. But then, he changed his mind and took off right across the front of us. Vee grabbed my right arm and then my knee. I was totally unaware of this boat, until it passed just a couple of feet from us. That was a close call. As it was such a big boat, we couldn’t power over it’s wash, as that would have flipped us over, so we had to bob over the wake and then open up on the other side.

Once past this, we then opened up again and crossed the finish line a few minutes later. We knew we had hammered it most of the way around, but didn’t know how well we’d done. Our time was 1 hour, 25 minutes and 54 seconds with an average speed of around 43 mph!! We had knocked the estimated time out of sight! 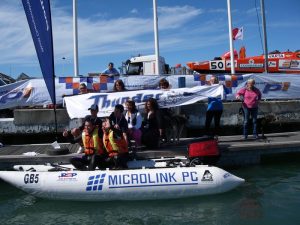 Within 5 minutes of coming ashore, my brain died! The concentration I had used to listen to Vee had zapped all of my energy. We went off to do a radio interview in Cowes, and Rhona had to keep prompting me, as I was now feeling doobie headed. For the rest of Friday I was completely knackered and slightly deaf, but it was all worth it. If anyone comes along and beats this “Blind Man” record, I’ll be back down in Southampton to get it back!!

Thanks to all the gang at Thundercats!!

If you want to find out more about Thundercats, click the link below.