As a child I had often travelled between Edinburgh and Fife when visiting both sets of grandparents.  To get from one to the other, we would cross the Firth of the Forth using the Forth Road Bridge.  From this bridge we could look east and see the magnificent Forth Rail Bridge.  Little did I know back then that one day I would be swimming just a few metres from this iconic feat of engineering.

The bridge was completed in 1890.  This awesome structure towers over 130 feet, (40m) above South and North Queensferry as it spans 1.6 miles, (2.5km), across the mighty Firth of the Forth.  The water swirling below flows from the chilly North Sea towards Stirling, and back again.  With boats of all sizes and business travelling up and down this waterway, it is fair to say that the water is not what one would call “crystal clear”.  Depending on the tide and what has recently passed along this river, the water is considered to be a tad “murky”. 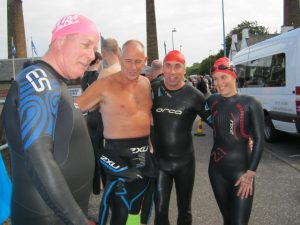 Back in 2010 when I started my open-water swimming, I had decided that the Forth was something I wanted to swim across. Back in the first half of last century there was a famous Scottish swimmer called Ned Barnie. He was one of the first people to swim across the Forth, swimming from Granton to Burntisland, a distance of 7 miles. My plan was to swim it from South Queensferry to North Queensferry, a much more reasonable distance of just over a mile.

In 2011 I found out about the organised swim, run by Scottish Swimming. It was too late to enter that year, so I planned to do the swim in 2012. As it happened, when the date for 2012 was made public, I had already booked myself in for the Oban Sea Kayak Race. Then in 2013, when the date was released for that year, Rhona had already booked herself in for the Craggy Island triathlon in Oban. So, having failed to get in on these 2 years, I contacted the organisers at the beginning of 2014 and was given a “probable” date. To avoid any double-booking, we aimed to keep our diaries free for 1 week either side until the date was confirmed.

Rhona took up open-water swimming in 2013, and only really learnt to swim in 2012. Before this, she would panic if asked to swim a full length of a swimming pool. 2 years on, she decided to push herself that little bit further, and put her name down for the Forth Swim too. 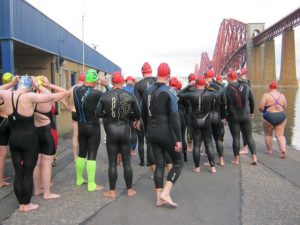 If you have read any of my swimming events on this website, you’ll know that I need a guide to keep me straight. For the Forth Swim, my good friend and guide, Eddie “the socks” Riach, came on board. With his trusty bright yellow socks I should have no problem following him.

On the morning of the 6th of September 2014, everybody met at the Albert Hotel in North Queensferry for the pre-swim briefing. As well as the usual topics covered, there was a very in-depth safety meeting. In these waters, safety was a major part of the event and taken very seriously. We were told that due to the time of the swim, there should be very little tide. However, even with no current, there was still potential for danger at the foot of each of the legs of the bridge. For this reason, most of the safety kayaks would form a line between the swimmers and the bridge. If a swimmer was to cross this line, they would be grabbed by a kayaker and brought back over to the safe side. Along with this, Eddie and I were given our very own safety kayaker, Ron, whose job would be to follow us and make sure we kept out of harms’ way. To help make Ron’s job easier, Eddie was given a lime green swimming hat. Everyone else had red hats, so the green hat would make Eddie easy to spot. 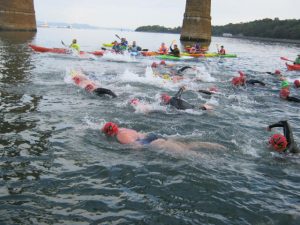 After the briefing we got changed, loaded up onto two mini-buses and were then driven over to South Queensferry where we would start the swim.

At South Queensferry we made our way down to Hawes Pier and awaited instructions. We were then told to enter the water, which most people did with a jump. At 15 degrees, the water was almost tropical! A minute or so later and the horn was blown. We were off. 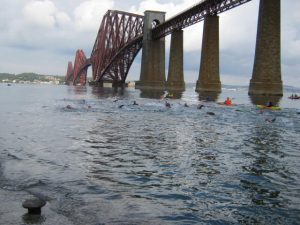 What an awesome sight of both swimmers and engineering!

Eddie brought his yellow socked legs to the surface of the water so I could see them, and then once I had located them he took off. For the first minute or so I did a great job of following Eddie. But then as we got further away from the shore and we picked up our pace, I struggled to see the socks. The bright yellow/green socks that had been so obvious in the water of all of our previous swims, seemed to blend in with the murky yellow/green water. Over the next 35 minutes I kept losing Eddie and on a couple of occasions, he had to stop swimming and guide me verbally. Ron also had to ask us to get closer to the safety line, as I had been heading off to Stirling! 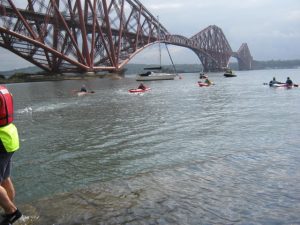 The water was pretty flat. In fact, the organisers said it had probably been the flattest they had seen on the previous 12 swims, since starting the event in 2000. Great for most of the swimmers, but I do love a bumpy swim! Apart from Eddie and Ron, I didn’t see anyone else in the water, although there were another 30+ swimmers. I don’t know if that was because everyone was so spread out or due to the colour of the water, but when Rho climbed out of the water Eddie told her she had some brown stuff on her face!?! 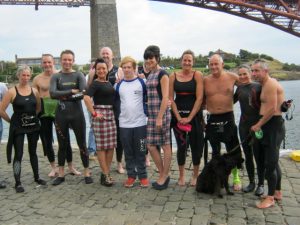 Eddie, Rhona, Deano and Stumpy on the far right

I have swum in events with large and small numbers of swimmers and for me events like the Forth Swim, who have smaller numbers, win every time! 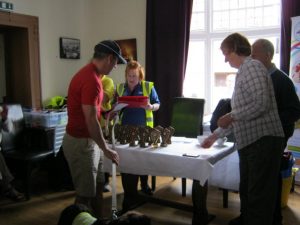 Deano and Stumpy collect a trophy

I am very proud to say that I came 3rd in my category, (senior men in wetsuit), with a time of 35:50, as due to a suspected perforated ear drum I had only swum 3 or 4 times in the previous 3 months. Rhona completed her swim in a very respectable time of 50:02. It also turns out that I am the first registered blind person to swim across the Forth, so hopefully next year, if the organisers don’t mind I’ll come back and be the second blind person too!
SCOTTISHSWIMMING.COM