After my eyes let me down at last years’ SUP 11 City Tour, I decided that this year I would be prepared for that.

Instead of being on my own on a single board, I got the awesome team of Alison Rennie, Joanne Hamilton-Vale, and Allistair Swinsco to join me on the Red Paddle Co Dragon board, and the equally awesome support team of Ali Pereira and Rhona on land. If my eyes failed me, I could still paddle with them shut! 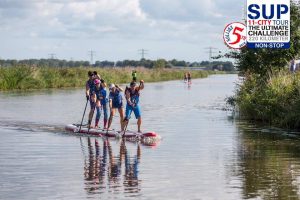 I was also taking lots of painkillers to cover my shoulder and wrist injury. What could possibly go wrong?

My foot, my bloody foot! 2 hours into a possible 35 hour paddle my right foot started to get a bit sore. By 6 hours in, and at our first stop, things went crazy.

As I took my foot off the board to step ashore, it felt like my foot imploded. The pain was excruciating. I couldn’t put any weight on it, and even when sitting on the floor, whilst the physio examined it, the pain seemed to increase.

The physio strapped it up and gave me some more pain killers, but even with this, the pain didn’t die down.

After a break of about 30 minutes I knew the race was over. This was a very difficult decision to make, as it wasn’t just my race that was done, but the whole team would also have to stop.

The guilt and pain wracked me for the next few days, as the team and friends rallied around me to try to help me get over what I saw as my failure.

I must admit though, that the party on the last night certainly help dull the pain, if only until I woke up the next morning with a thumping hangover!

’m glad to say that Allistair and Alison went on to complete the 5 day “Tour” at an awesome pace, and Jo completed it at a more leisurely pace, picking up litter en route.

Also, Rhona went on to complete the 5th day of the Tour, completing her first ever 28km on a SUP, at a great pace, considering the terrible weather conditions!

So, for the 2nd year, the SUP 11 City Tour didn’t go to plan. With a severe case of Plantar Fasciitis, (still causing pain 3 months later), it is with sadness that I have decided I won’t be making a 3rd attempt in 2019.

Instead, in 2019 I will be mixing things up, with several adventures already planned. (Some SUP, some non-SUP.)

To find out more, watch this space!