In the Summer of 2018, my dad and step-mum, took a ride on Zipworld’s Velocity 2 – Europe’s longest, and the world’s fastest zipwire. The next time we saw them they were raving about it. They showed us their videos and told us we should give it a go. On May 27th we did just that! 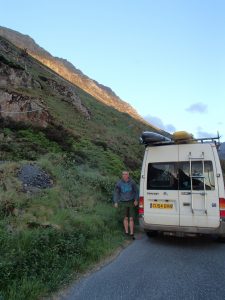 After a rough night in our van, due to strong winds, heavy rain, and the occasional rock fall, we weren’t sure if the ride would go ahead.

As we pulled into Zipworld’s car park, we were surrounded by high mountains which sheltered us from the worst of the elements.

To start off, we were given our kit – red jumpsuit, white helmet, goggles, and harness. Once dressed, we were taken up to the warm up zipwire. This was a smaller version of Velocity 2, only a couple of hundred metres long.

At the launch station, there were 4 launch points. Rhona was on the furthest right wire, and I was next to her on her left.

We were told to lie, face down on the raised platforms, (a bit like a massage table), and the staff then hooked us up to the overhead wires. There was a metal bar on our harness which hung down and we were told to place the soles of our feet against this. We were then told to hold on to the handles on our harness, at around hip level. 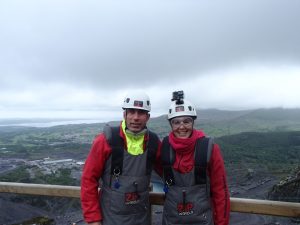 Once hooked up, and in position, the platforms lowered to ground level, leaving us hanging just a few inches above them. The staff then cross-checked us, before the countdown began.

I was determined to beat Rhona across the finish line, so I pulled my shoulders back, arched my back slightly, and kept my head down.

There was a view of a lake below us, but it was too far away for me to see clearly. 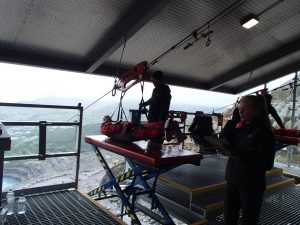 On this wee one, our maximum speed would be 35mph, and I did everything I could to reach it.

When we crossed the line, I was ahead of Rho! Round one to me!!

From here we were lowered down, unhooked, and then loaded on to a big red truck, which drove us up the extremely steep quarry road to the big one. En route, Rho asked me how I had managed to go so fast on the wee one, so I told her about my body position. Bad move!

10 minutes later we were at the top of the mountain. 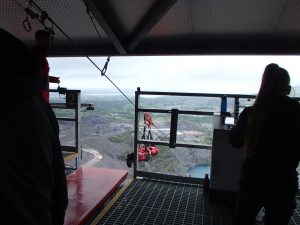 The set up here, at Velocity 2, was identical to the warm up run. Only now we were about to travel 1555m, and reach speeds of 100mph plus!

On this one, I was on the far left of the launch station, with Rho on the next wire, on my right. 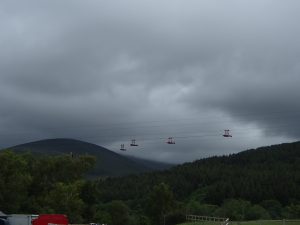 As we took off on this one, I assumed the same body position as earlier, and looked to my right to see that Rho was behind me again. As we picked up speed, (0-60mph in under 10 seconds), the G-force made it much harder for me to look around, and I didn’t want to lose any speed. Was I still ahead of her? 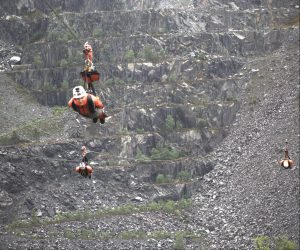 Well, as you can see from the photo and the videos, Rho blew me away. I think she had been home for crumpets and tea by the time I crossed the line! Darn! Round two to Rho. We may just have to go back for a re-match!!

At the end of October 2018, my step-mum, Maureen, was diagnosed with cancer. She was told that she may have six months to live. She told us that she wanted to go back and do another Velocity 2 before she died. Sadly, the treatment she was given didn’t work, and Maureen Dunbar passed away a few days before Christmas, aged 60. She was a remarkable lady, and is much missed by everyone who knew and loved her.