With a top recorded speed of over 170 kph, Fly By Wire is said to be the fastest ride in the world. “It’s the closest you’ll ever get to taking control of a fighter plane!” With comments like these, an extreme sports enthusiast like myself could hardly resist having a go. Let me at it!! 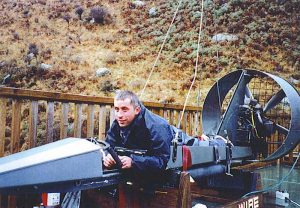 I had first seen Fly By Wire on an extreme sports programme on the television about 3 years previously. Knowing that on our trip, we would be heading to Queenstown, I had already decided to find them and have a go!

Rhona is not into the extreme sports as much as me, but I managed to persuade her to give this one a try. 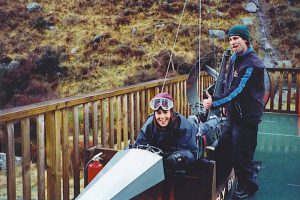 We arrived at the site on a wet, overcast day. Instead of the usual “fly by wire” bright red flying suits issued to the fliers, we were given dark blue waterproofs. This did not dampen our enthusiasm.

There was a small group of us would-be fliers. All were first-timers, and all were very excited. 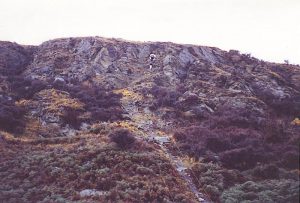 The Fly By Wire site is situated in a canyon between two very steep hills. After being shown how to use the controls, we were strapped into this strange looking flying machine. From the launch pad we were winched backwards up the hill. At this point the adrenaline began to kick in. You are now almost vertical! 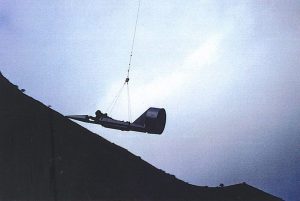 It is now time to release the brakes and start to fly. As you drop towards the ground at amazing speed, you realise that you are now in charge of the plane and it is now time to have some fun.

As you head towards the canyon floor you are suddenly scooped up and then start to climb up the opposite side. 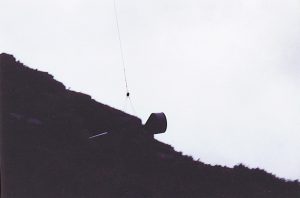 At some points you are only a few metres above the ground. As you get to the maximum height, you have to turn the plane around and start your descent once again, each time trying to create a figure of 8. This pattern continues for the next 6 minutes until the flight ends. Throughot the flight you constantly have the roar of the engine behind you and the air flying into your face. If this doesn’t get you excited, you must be dead!

Rhona and I really enjoyed it. So much so, that I had a second go!