After completing my first Lamlash Splash in 2013, I knew I would be coming back in 2014 to do it again.  It is a fantastic wee swim of 1.3 miles from the Holy Isle back to Lamlash on Arran.  The last time I swam it, it was just me and my guide Eddie “the socks” Riach and 38 others.  However, this year I had managed to persuade my wife, Rhona, and our good friend Julie Beech to also participate.  Also, last year we had made a long weekend of the trip, but we liked Arran so much, this year we went out for 8 days.

As we were going to be there for the week before the swim, I emailed Ann Hart, one of the Splash organisers, and asked her if there were any swimming groups that we could join during our stay.  It just so happened that she and 2 friends, Mike Mellor and Eric Milton were going to be doing a couple of swims during our week, so she very kindly invited us to join them on the Monday for our first swim as a group.

On the Sunday, Rhona and I fancied a wee swim and SUP, but the water at Brodick was a bit rough.  So, we decided to head over to Blackwaterfoot, on the other side of the island, to check out the conditions there.  (That’s the joy of Arran, if the water is rough on one side, just pop over to the other side.)  This turned out to be an excellent idea, and on arriving at Blackwaterfoot, the sea was perfect.  We spent around an hour taking turns either swimming or safety SUPing for each other.

On the Monday we met up with Ann, Eric and Mike and had a great wee swim around the boats in Lamlash bay.  Eric very kindly took up the role of my sighted guide, and was able to guide me around the boats, as well as avoid the odd jellyfish that were lingering in the area.  On the Wednesday we repeated this, and this was us all set for Saturdays’ swim.

On the Thursday we met up with another islander, Andrea.  She had recently taken up open-water swimming, and this was to be only her third time out in deep water.  I acted as safety SUPer for her, as she swam from Kings Cross towards Holy Isle.  She was a bit nervous about the deep, black water, but more nervous about possibly being stung by the numerous jellyfish in the area.  She wasn’t sure how she would react if stung.  She didn’t have to wait long to find out.  Half way out to Holy Isle she came across her first jelly, but was able to swim past it.  Unfortunately a few yards further on she wasn’t so lucky.  She got stung across her neck and face.  When this happened she climbed up onto the SUP to calm herself down.  I had been stung on my hand and foot earlier that week, and was able to reassure Andrea that it just felt like a nasty nettle sting.  Sure enough, after a minute or so out of the water, her stings started to calm down, and she was keen to get back into the water.

She came across a few more jellies, and climbed on to the board once more, but again, once past them she was back in the water.  As she said later, she was glad that she had been stung on this training swim, as opposed to on the Splash, as if she had climbed out then she would have been disqualified.  I found out later that she had a worse reaction to the stings than I did, but it didn’t put her off the Splash.  Nice one Andrea!

When I swam the Lamlash Splash, in 2013, the water had been very flat.  The flattest in the events’ history.  I had said that I preferred a few bumps, and this year my wish was granted.  By the time we were taken over to the Holy Isle for the start of the swim, I was soaked through from the bouncing up and down on the waves in the inflatable power boat that took us there.  On arrival, Eddie and I met up with our safety kayaker.  The great news was that it was Gary, the same kayaker we had in 2013.  He’s a top bloke and knew exactly what to do with us.  He did a cracking job in 2013 and repeated this in 2014.  Thanks Gary! 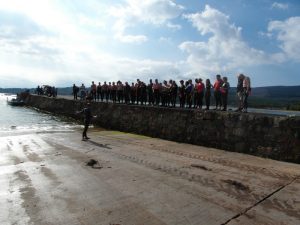 The swim itself is pretty hard to describe.  Due to the conditions, I just kept my head down and did my best to follow Eddies’ yellow socks.  Due to the waves, every now and then I would be just a few inches from Eddies’ feet, before a wave caught him and all of a sudden he would be 10 feet to my two o’clock, or 5 feet to my ten o’clock.  As with last year, Eddie was always checking back to make sure I wasn’t too far from him.  If he saw that I had lost him, which I did on several occasions, he would stop swimming, lower his socked feet in the water and move those yellow socks around until I saw them.  As well as looking where to go, checking if I was still following him, and looking out to avoid hitting any other swimmers, he was also trying to guide me around any jellyfish that popped into our swim direction.  A very busy man!

The swim was great fun, and I enjoyed it much more this time.  Due to a suspected perforated ear drum, I had only swum around 6 times in the previous 4 months to the event, so I knew it was going to be a slower time than last year.  With a final time of 37 minutes and 10 seconds, I was very happy with that.  Due to the conditions, everyone who had swum last year found that this years’ time was much slower.

All the way over I had been thinking about Rhona and Julie, knowing that this was the longest and toughest swim either of them had ever done, and wondering if they might have opted out.  With the water conditions as they were, there would have been no shame in doing this.  However, they both completed the swim in just over 50 minutes.  Well done girls! 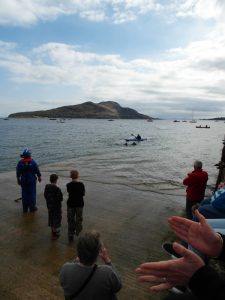 There are many great things about the Lamlash Splash, but one of them is the spirit of the event.  The elite swimmers were finished in times around 30 minutes, but everybody hung on to cheer all of the 40 swimmers in, even if it meant hanging around for 25+ minutes.  You don’t get that at some of those big events.  I’d like to recommend this swim to everyone out there, but there are only ever 40 places allowed, so I’m going to lie through my teeth and say it was a terrible event and you wouldn’t enjoy it!

Lamlash Splash, I’m sorry to say, but you’re going to see me again next year!