A few days after swimming Loch Etchachan, my friend Patrick Winterton phoned me.  (Patrick is an all round action man, but is probably best known for his sea kayak adventures.)  He asked me if I fancied participating in the 20km Oban Sea Kayak Race, which was due to take place in less than 3 weeks, on the 25th of August, 2012.  I hadn’t been in a sea kayak since my Corryvreckan swim, and hadn’t covered any real distance since 2009.  So, of course, I said yes! 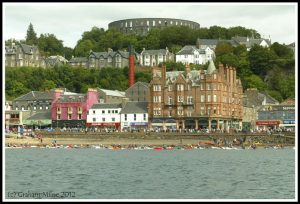 Over the next two and a bit weeks, I did the exercises Patrick had given me.  I was not able to get out on the water, so all training was done at home.  Patrick described the training was not designed to make me go faster, but to minimise on injuries.

Patrick also told me that I should bring my Aquapak water bladder backpack, and set the drinking tube up so that I could drink without taking my hands off the paddles.  It was now starting to get very serious!

Rhona and I arrived in Oban on the Friday night, and met up with another friend Derek, at the bunkhouse.  I must have been more nervous than I thought, as I only slept for an hour or so. 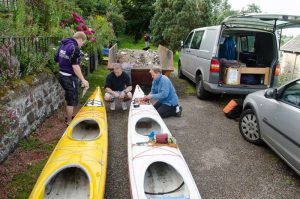 James, Chris and Patrick getting the kayaks ready – photo courtesy of Derek Alexander

The following morning we went over to Patrick’s house where we met Chris and James.  The too were participating in the race.  It turned out that only one of them had ever done any paddling before.  However, they did have youth and a lot of muscles on their side.  They would be paddling in one double kayak, and Patrick and I would be in another.  (We were the only 2 doubles in this race.) 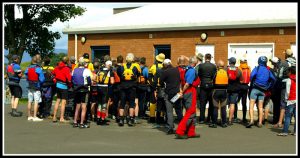 After loading the boats onto the vehicles, we headed down to meet the other paddlers, and get ready for the race.

Flotilla heading to the start – photo courtesy of Graham Milne

As if 20km was not far enough, we were then told that we would all need to paddle 2km to the start point, on the beach in the centre of Oban. 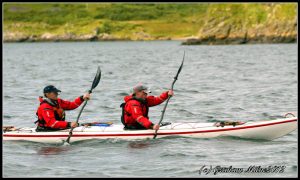 Here we did our final preparations.  For Patrick and I that meant taking off our cags.  I was already sweating loads and we’d only just paddled 2km.  We then paddled out to the start line, and waited for the horn to sound.

As the horn went off, the two doubles powered to the front of the pack.  We were soon in first place. 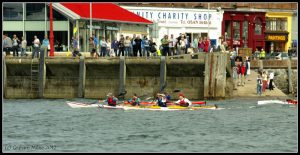 Then we were soon in second, third, and then fourth place.  Yippee, at this rate, we could cover all 56 places in under 10 minutes!

The race was around the island of Kerrera.  The first part was heading south in the shelter of the island.  Here we settled into a steady eighth position.  Patrick would tell me if we were catching anyone, or if anyone was catching us.  This was the easy section of the race, but I don’t recall it being that easy. 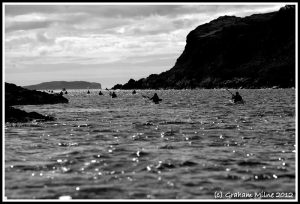 At the bottom of the island, we headed west along the base, where the wind was starting to show itself.  At the end of this section we turned right and headed north.  This was going to be the toughest section.  The wind had picked up and we were now in a Force 5-6.  The double sea kayak certainly had it’s advantages in other parts of the race, but on this section, we were just a big heavy thing that the wind was trying to blow backwards.  It was on this stage that a few more of the smaller, slimmer sea kayaks came into their own, and we started losing positions.  Patrick would tell me of boats catching up with us, and tell me to go faster and stronger.  It was after about 20 minutes of battling through this stuff that things went a bit pear shape for me. 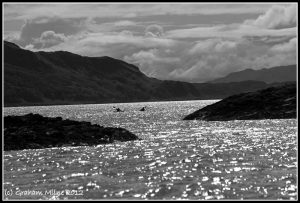 I hadn’t had much for breakfast, as I knew a toilet break would not be possible, and a lack of food and sleep hit me.  I remember seeing a castle off to my left.  It looked like it was just floating on the water.  Then I saw some huge snow covered mountains.  The snow came right down into the water, and I remember thinking “why isn’t the salt water melting the snow when the waves go over it”.  I also remember laughing to myself, but can’t really remember why.  I think, (or maybe that should be “I hope”), I was still paddling during this, but if I was I’m sure it wasn’t that great.  Poor Patrick must have been doing 95% of it.  At some point I got some food onboard, and all of a sudden clicked back into life.  I felt strong, if a little confused to what had just happened.

During this time we had been overtaken by quite a few boats.  As I came back to life, I heard Patrick say “Aha, the boy is back” and then “if you can keep up this pace, we’ll do just fine.”

Over the next 10 minutes we slowly clawed our way back, passing several kayaks.  As we took the final turn, heading straight for Oban, Patrick told me that we had just over 1km to go.  Over the next 700m we over took 4 more boats, and the end was in sight, (well for Patrick anyway).  This was when things went mental.

Patrick told me that we could still catch up with a few more kayaks, and he would plan this out.  He told me to go to just below my maximum rate and power until we passed a moored yacht.  At this point I had to open up and give it everything I had for the last 100 metres.  So this is what I did.  10, 9, 8….. 3, 2, 1, we were at the yacht, “go for it”.  I pulled everything I had left out of the bag and put it into my speed and power.

Back in the race – photo courtesy of Derek Alexander

Then Patrick said, “now step it up to the next level!”  The “next level”!  I’d just given everything and now he wanted more.  Somehow I found a little more. 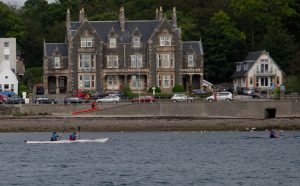 Again, another 50 metres and the instruction “up another level to your maximum” was given.  What?  Where was I going to get any more?  And anyway, I thought we only had 100 metres to go.  The instruction to “up a level” came 2 or 3 more times, and each time we seemed to find just a little bit more.

Up another level – photo courtesy of Derek Alexander 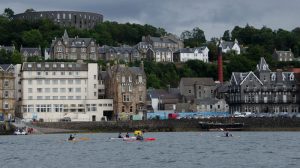 When we finally crossed the line, in a time of 2 hours 14 minutes and 51 seconds, we were back in eighth position.  In the last 1km we had over taken 7 boats.  Patrick had hoped to take somewhere around 2 hours, so including my mental wanderings, we were pretty chuffed with the result!