Ganavan, (near Oban), to Helensburgh, (near Glasgow), Scotland.

In 2015, a very good friend Cathy Winterton told me about the newly opened Argyll Sea Kayak Trail, and as we are both into SUPing, she suggested that this could make a great wee paddle. 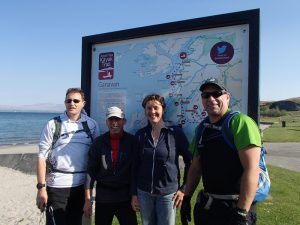 Cathy seeing the team off at Ganavan

The route stretches along the west coast of Scotland, from Ganavan, (near Oban), in the north, down to Helensburgh, (near Glasgow), in the south, covering a distance of 150km.  Although many people had kayaked and canoed the whole route, nobody had yet done the whole route on stand up paddle-boards.  Could we be the first?

Our initial plan had been to take it on in October 2015, but we ended up postponing it until May 2016.

As well as Cathy and I, we would be joined by 2 other experienced SUPers – Allistair Swinsco of Northwest Paddleboards, and Ian Cormack of SUP Ecosse.

Unfortunately, due to other commitments, Cathy was unable to do the training required, so she was forced to drop out, leaving just Ian, Allistair, and myself to attempt the paddle.

On the morning of the 12th of May, 2016, our little trio set off from Ganavan beach, at around 09:30.
Cathy was there to wave us off, and from here on in, we’d be shadowed by our land support team of Alison Rennie, my Rhona, and Commander Stumpy, (our dog).

The water was pretty lumpy at Ganavan, and for the first few hundred metres, we were forced to kneel down. 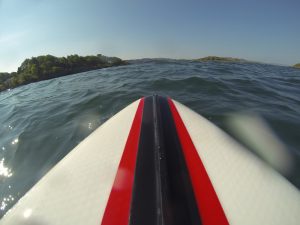 A bit of a lumpy start

As soon as we entered Oban harbour we were back up on our feet, and for the next few hours we had the tide with us.

We next met up with the girls at Seil.  Here we paddled under “The Bridge over the Atlantic”, and were carried along at a fair pace on the river.  Even when we didn’t paddle, we were still knocking out around 1.5mph. 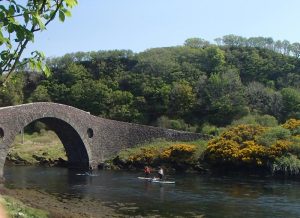 Paddling under the Bridge over the Atlantic

All was going well, until we passed Ardfern and turned the corner into Dorus Mor.  (We could hear it before we saw it!)  This place was mental!  We knew that we had to get there before 17:30, and we had arrived a good 30 minutes early, but the whirlpools were already kicking off, and the waves were roaring towards us.  (See 1 minute and 5 seconds into the video above.)  We had to try to hug the shore, but at the same time, avoid the whirlpools, which were springing up all over the place.

We pointed our boards in the direction we needed to go and paddled hard.  However, after 20 minutes of paddling, keeping the land on our left and our boards pointing forward, we had only gone forward around 100 yards.  We had just done the Dorus Mor Shuffle.  (See the image below). 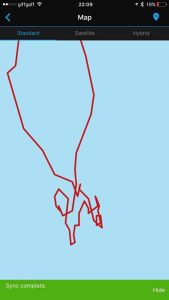 Eventually we made our way into an eddy and took a breather.  After a quick recce, we decided to get even closer to the shore, (2-3 feet from land), and power our way around the next corner to see what was there.  From here, we were able to then take a wide route around the wild water and slowly paddle towards Crinan.  This must have been tough on the other 2, because they could see Crinan a couple of miles off in the distance, but due to the conditions we could not paddle straight there, and took a more circuitous route, which went on for well over an hour.

That evening we arrived in Crinan, and spent the evening camped out in the car park. 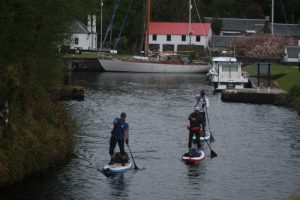 Setting off down the Crinan Canal

Day 2 started with us on the canal at 05:30, with a paddle along the Crinan Canal to Ardrishaig.  The canal is 9 miles long, so we had thought that this would be an easy 2-2.5 hour paddle.  We were wrong.  Almost all of the paddle was into a headwind, and was definitely not as easy as we had hoped.  There was also a lot of portages, (which we had known about), but this obviously slowed things down.  But at least the water was flat! 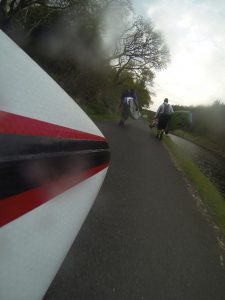 One of several portages along the Crinan Canal

At Ardrishaig we spent a bit of time working out how to get on to the sea loch, and eventually plumped for going in via Ardrishaig harbour.  Whilst sorting ourselves out, we met a lady, (who was “75, don’t you know”).  She had obviously sussed us out, because she told us about places to eat in the area, but told us not to eat at one place as it was “too lah de dah for people like us”!  (OK, we hadn’t had a shower that day, but were we really that bad!?!)

From Ardrishaig we made our way out into Loch Gilp and then onto Loch Fyne.

For the first 4 miles we had a slight tail breeze, so decided to stick to the middle of the loch.  Unfortunately, the conditions quickly changed, and not for the better.

The winds whipped up, and the water got extremely lumpy.  Allistair at 6 foot tall, was forced to kneel down, as when he stood up, he was blown backwards.  A short time later Ian was also kneeling down.

Unfortunately after too many accidents, my knees and ankles are pretty much shot away, and this means that I cannot kneel down for more than 2-3 minutes without seizing up.  This meant, that although kneeling down was the safer option, I had to remain standing.

With the wind and the waves, I had come to terms, (in my mind), that I was going to fall in, and was comfortable with that.

From the middle of Loch Fyne, (where Ian and Allistair saw a pod of 6 dolphins), we pointed our boards to the distant east shore and put our heads down.  1.5 miles and 60 minutes later we reached it and went ashore for a wee break.  It was here, that Ian told me that whilst paddling through these rough conditions, that I had looked like “Bambi on ice”.  I didn’t care what I looked like, I was just amazed that I hadn’t fallen in!

After our break, we then headed south towards our finish point at Portavadie.  With the conditions as rough as they were, we decided to hug the coast again, and when we came to any bays to cross, we just put our heads down and paddled from headland to headland, taking a wee breather at each one, before crossing the next bay.  Whilst hugging the coast, we had a constant headwind, but when crossing the bays, we would get an even stronger crosswind, coming down through the hills.  We had guesstimated that the winds were between 15-20mph, but on speaking to a local the next morning, they told me it had actually been 30mph.  No wonder we had found it tough!

Along this route, we saw some seals leaping out of the water, and for several miles, Allistair had a number of seals, (15-20 at one point), following him. 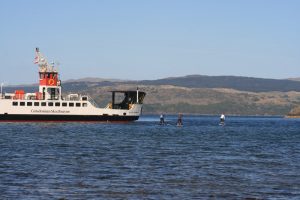 Setting off from Portavadie

Day 3 started off from Portavadie.  We had 2 plans in mind.  If the wind was against us, we’d aim to finish at Colintraive, however, if the wind was with us, which is how it was looking, we’d head on down to Toward Sailing Club.

Heading out of Portavadie, we headed south towards Bute and then went around the north end of the island.  Our timing had been spot on, and we had used the wind and tide to our advantage.  Near Tighnabruaich, we were joined by local kayaker, Peter, just as we hit a headwind.  Peter kayaked alongside Ian, trying to chat to him, but unfortunately the headwind was hitting the 3 of us pretty hard, and poor Ian tried to answer Peter’s questions, whilst trying to power into the wind.

As we rounded the north end of Bute, the headwind turned into a tailwind, and we told Alison and Rhona that we would be heading on down to Toward.  10 minutes after telling them this, the wind changed from a reasonable tailwind, into a very unreasonable headwind.

After the previous days’ battle against the headwinds, we decided that it would be pointless to head to Toward, and that we would finish the day at Colintraive.  Unfortunately, the girls had already headed off into the hills on a very long drive to Dunoon and round to Toward.  By the time we were able to tell them of our change in plans, they were almost at Dunoon.

Instead of hanging around in Colintraive, waiting for the girls, we made a decision to try and make some movement down the shoreline.  Every yard we paddled today would be a yard less to paddle tomorrow.

By the time the girls met up with us, we had paddled another couple of miles past Colintraive.  This unplanned, rough camping spot, proved to be the best camp site of the whole trip! 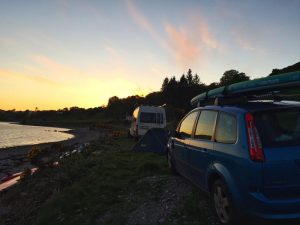 The best camp spot of the whole trip

Cathy and her daughter Farraid also joined us here, and when we started Day 4, Cathy paddled the first mile or so with us. 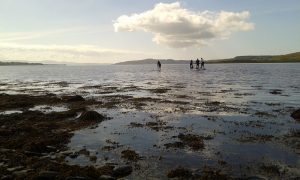 Cathy joins the team for a wee paddle

As we turned the corner at the lighthouse, just past Toward Sailing Club, we entered the Clyde.  Here we hoped to have the wind and tide with us.  The tide was OK, but the tailwind we had hoped for actually came in over our right shoulders.  This meant that we had good sized waves coming from our 4 o’clock.

From the west side of the Clyde, we took a slow and steady paddle aiming to our 1 o’clock.  We did get some assistance from the tide, and we were grateful for that.

Up near Cloch Point the water got extremely lumpy, and 2 of the team took a dip.

However, rounding the Point, the water became much calmer, and from here we made our way towards the finishing point over at Helensburgh. Over this section we had a few wee chats with yachts that either passed us, or we passed. 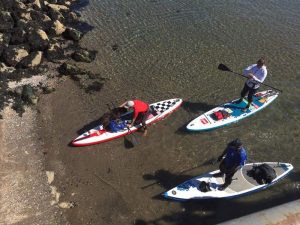 Stumpy greets the team at Helensburgh

The sun had shone for most of the 4 days, and we all ended up with weird and wonderful tan lines caused by our various shorts, ¾ length trousers, vests, t-shirts, etc.  I even ended up with one side of my face being rather red, and the other still remaining white!

We had a fantastic team on and off the water for the ASKT, and I think this could well be the start of many adventures together.  I certainly hope it is!!

I would also like to thank the great folk at Argyll and Bute Council who were so helpful with our preparations.

So this awesome challenge, this wonderful adventure, this amazing experience, Cathy Winterton, it was all your fault.  Thank you Cathy!! 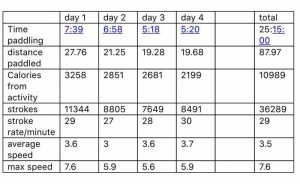