Whilst in New Zealand, I had a flight in the Red Bull Actionflite stunt plane, based at Queenstown airport. 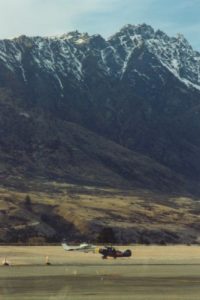 The plane was a Pitts Special, said to be one of the finest high performance aerobatic aircraft ever built.

The flight lasted around 20 minutes. During this time, we reached speeds of up to 200 kmph and went from around +6 to -3 Gs.

From a gentle take-off, we flew high above Queenstown and its huge lake. The mountains were covered with snow, the sky was blue and the sun was hot. 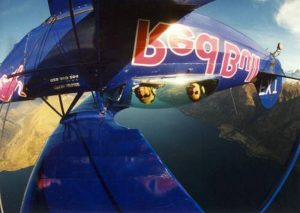 Deano in a barrel roll – photo courtesy of Actionflite

After reaching the preferred height, the aerobatics began. From barrel rolling to steep climbs and dives. At one point I counted over 4 barrel rolls in a row!!  It felt like I spent more time upside down than the right way up!

The flight was absolutely fantastic. For most of the flight I was on a massive high, laughing and shouting with excitement, whilst at the same time, hoping not to be reunited with my breakfast.

I have seen this type of thing done on the television, but the real thing is totally amazing!! If you ever make it out to Queenstown, look this one up!