We, (The 3 Amigos), had first come up with the ABC – Around Bute Challenge – whilst SUPing the ASKT – Argyll Sea Kayak Trail.  Whilst relaxing after a hard days’ paddling at Portavadie, we met a local kayaker called Pete.  We got chatting and he mentioned that he had once kayaked around the Isle of Bute in a single day, and had completed it in 12 hours.

The following day, the ASKT took us around the north end of Bute, where Pete came and joined us for a wee section.  That evening we set up camp just south of Colintraive and started talking about whether we could do Bute in a day on SUPs.  A couple of weeks later, the date was set to attempt it. 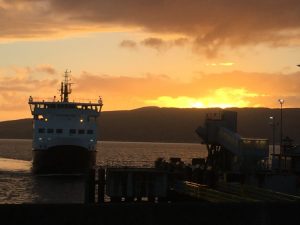 Waiting for the ferry to Bute

On all of this years’ 3 Amigos trips – ASKT, 3 Lakes, and the Magnificent 7 – we had been supported on land by Allistair’s partner Alison Rennie.  She also SUPs, but hadn’t had much of a chance to do so whilst following us around.  When we told Alison of our plan, it was suggested that we could make the ABC a 3 day event.  The guys would aim to paddle the whole thing on Day 1, and then Alison and my wife Rhona, would attempt to do it over Days 2 & 3, with the guys coming along to make up the numbers.

Unfortunately a couple of weeks before we were due to take on the ABC, Ian had to pull out due to work commitments.  This meant it would now be down to just the 2 Amigos. 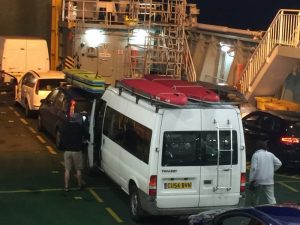 On the 27th of August, at 09:30, Allistair and I set off from next to the slipway for the Colintraive ferry.  We knew that heading south, we should be able to catch the tide going out.  Then as we went along the south edge of the island, we should be in slack tide, before turning the corner and heading north, just as the tide turned again. 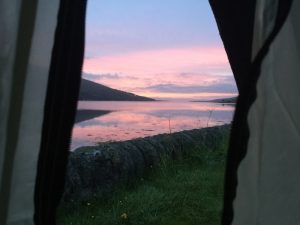 View from the tent on the day of the ABC

We reckoned that if we timed it right, we should be able to beat the 12 hour target, and were now aiming for around 10 hours. 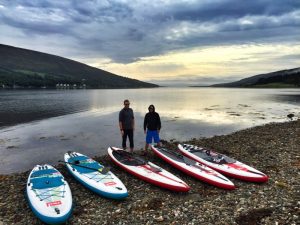 Which boards to use?

The first hour and a half down to Rothesay was great.  The tide was definitely going in the right direction, but unfortunately there was no wind.  However, as we passed Rothesay everything became much more challenging. 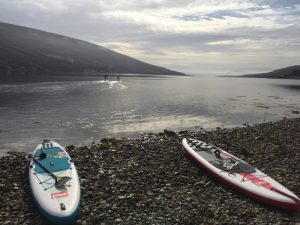 A wind picked up, and instead of having the waves going in 1 direction, they came from every direction, and in no obvious pattern.

One minute the waves would crash you from behind, the next they’d be hitting you head-on, then they’d be crashing into you from the side.

Allistair had brought his old Red Paddle 14’ which was very tippy in these conditions.  So tippy, that he was forced to kneel down and paddle.

I had my 14’ x 26” Red Paddle board, which although I could just about balance on it, the front of it was catching the wind, and with my wee frame trying to control it, it was having none of it.

Soon both of us were no longer standing, and were just battling to keep the boards moving in a single direction.

I was struggling big time with this.  I suggested to Allistair that we try to contact the girls, who were following us, and see if we could go ashore and swap our boards for something more stable – Allistair’s Red Paddle 13’2 Explorer and my Red Paddle 12’6 Race – but Allistair told me that the road had ended a mile or so behind us and that the girls had probably now gone inland. 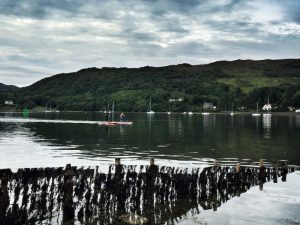 If I’m honest, I had had enough.  If Allistair had said “let’s pack it in” I would have jumped at the chance.  I later found out that he was thinking exactly the same.  We’d both had more than enough of this unpredictable, messy, and almost un-navigable sea.

We battled on for another 2 hours until we eventually turned the corner and started heading north.  From here it was a great paddle up the west side, where we were joined by seals, I had my fin bumped by a cormorant as it dived under my board from one side to the other, and Allistair spotted a couple of dolphins a hundred metres away from us, playing in the wake of a speed boat.

We put in the odd fast section, but really just enjoyed the lovely warm Scottish weather, with the sun doing its thing. 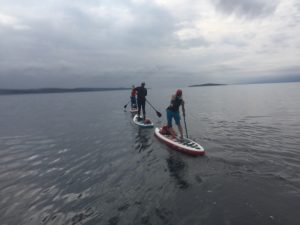 Our target had been to get around the island in less than 12 hours.  We completed the 56.9km (35.35602 miles) in a total time of 8 hours and 50 minutes, which included 18 minutes worth of fuel breaks.  Not only did we beat our target, but Allistair and I became the first people to circumnavigate the Isle of Bute on SUPs!

Unfortunately the forecast wasn’t so good for the Monday, so the 4 of us, Alison, Rhona, Allistair, and me, paddled 14.5 miles from Colintraive, north, along the top and then down the west shore, to where we found a cracking wee bay, where we spent the Sunday night chilling out, and then a couple of hours playing in the bay on the Monday morning, before the forecasted strong winds arrived. 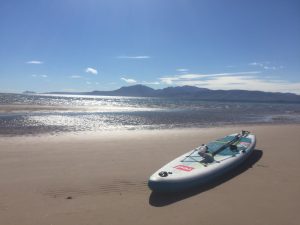 Day 3: Where could be better?

I think I can speak for the team when I say we would have been hard pushed to have had a better bank holiday weekend – great paddling, great weather, great scenery, and wonderful company!

All photos courtesy of Alison and Allistair