The “Sphere” has come to Scotland! 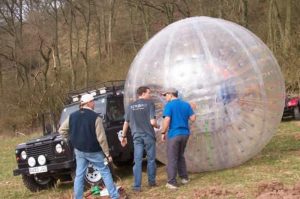 The Sphere has come to Scotland!

Nae Limits, Scotland’s premier outdoor and extreme sports centre have bought themselves a Sphere and will be offering it to the public from Easter onwards.

What is a Sphere? From the outside it looks like a 4 metre high inflatable ball. It is very simillar to a Zorb. When I did my Zorbing in New Zealand, there was only room inside for one person to be strapped in at a time. The Sphere is designed to take 2! This means that not only can you have great fun rolling and bouncing your way down a hill, but you can watch the reactions of a friend doing exactly the same! The harnesses are set up so that you are facing each other the whole time!

The Sphere may not be everybody’s idea of an extreme sport, but it certainly gets my adrenaline pumping. 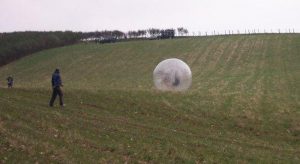 I was lucky enough to be invited to one of the test runs, at the end of March. Nae Limits had got the Sphere, but just needed to find the perfect site. Dave H and I were lucky enough to be the “crash test dummies” on site number 4.

Site number 4 was located just outside Blairgowrie in Perthshire. It was a large field on the side of a hill. The Sphere was taken to the top of the hill on a trailer, behind Nae Limits new quad bike and Dave and I went up in the back of the Land Rover. After all, we were the “crash test dummies”, not hill walkers! 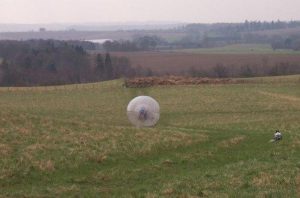 Once at the top of the hill, we climbed into this huge PVC bubble. Richard, the Nae Limits Sphere manager, then strapped us in and we were ready to rumble!

As we started off rolling down the hill, I thought to myself, “theres nothing to this”. After another second or two it really kicked in. As this was a test run, conditions were not ideal. We started to bounce as well as roll, and the adrenaline really kicked in. Up until then I had been laughing. Now it was time to keep my mouth shut, as it hadn’t been long since I had eaten. Dave didn’t seem to be saying much. We were both aware of taking air on several occassions. 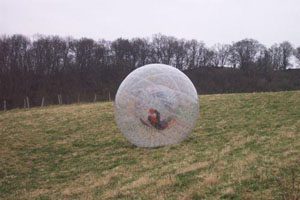 After what seemed like a hundred full revolutions, there was a huge crashing sound and we stopped! I wasn’t sure what had happened, but Dave very calmly said that we were at the end of the ride. We unstrapped ourselves and climbed out of the Sphere. I think it is safe to say that we had just had an amazing trip. We had just covered around 150 metres in about 12 seconds! That is moving some!

This was a test run, so I can’t guarantee your trip will be exactly the same as that, but if it doesn’t get your heart pumping, you must be dead!

As I said earlier, it may not be considered as true “extreme sport”, but if you want a quick adrenaline rush, get yourself up to Perthshire!