If you’ve been reading my SUP Blog, you’ll know that 2014 and 15 are set to be the years of the SUP, (Stand Up Paddle-board), for me.  I have set myself several SUP challenges, and Loch Tay was just one of these.

The original plan had been to try to SUP the full length of Loch Tay, (approximately 23.5km), with Barry and Andy of Wilderness SUP.  Unfortunately due to business commitments, etc, fixing a date for this was proving to be very difficult.  So, on Sunday July the 13th I decided to go to Loch Tay and have a wee training session.

My plan had been to paddle up the loch, from Kenmore, for 2 hours before turning around and heading back.  I hoped this would give me enough time to get 10km up the loch, giving me a total training session of 20km.  Unfortunately on the 13th there was an 8mph head wind to fight with and I wasn’t sure if I would be able to travel 10km up the loch against it. 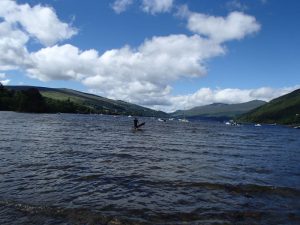 My board is a Coreban 12’ 6” Sonic inflatable board that I bought from Oceansource.net. It is a great board, but as it is inflatable it sits slightly higher on the water, and is more susceptible to strong winds than the rigid SUPs. With this in mind, I did the first 1km kneeling down, whilst I got to grips with the wind and the waves.

The paddle was extremely tough and I am glad to say that I actually knocked out almost 25km that day. It was on this trip that I came up with the crazy idea of taking on Loch Tay on my own. This may not sound that special, but for every big challenge I have done, whether it be sea kayaking in the Western Isles, canyoning down Sa Fosca, aquaseilling the UK’s highest waterfall, swimming the Corryvreckan Gulf, etc, etc, I have had at least one guide. Being registered blind and doing these things is potentially extremely dangerous. 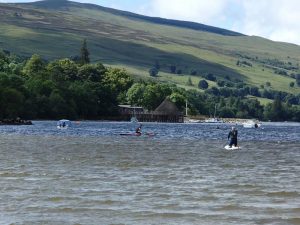 During my 4 hours on Loch Tay I ran a full risk assessment on a solo trip; how could I navigate, what could go wrong, what if I got separated from my board, what if I lost my paddle, what would I need to bring with me, etc, etc. These were all valid questions and I could answer them all. So, by the time I returned to Kenmore I had decided I was going to SUP Loch Tay on the following weekend, totally on my own.

Over the next week I ran through all of my drills, packed, unpacked, re-packed, and unpacked all of my kit. I had a deck bag on the front of my SUP and this would have to contain everything, from food and drink, to spare warm kit to speaking clock. I also had to sort out my Go Pros. Everything was checked, checked again, and when I thought it was sorted, I checked it one more time.

I only managed a couple of hours’ broken sleep on the night before the trip. I kept running through my kit and risk assessments. But also at the back of my mind was a wee nagging voice telling me what I was about to do was very silly. A wee blind guy on an inflatable SUP, out on a great big loch. Blind & Stupid!?! 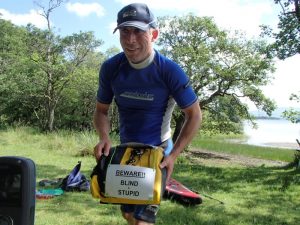 The BBC weather forecast had told me that Sunday the 20th of July would be the perfect day for the trip. If I started at Killin at 11am the wind would blow me up the loch. Then at around 3pm the wind would change direction and would blow me around the corner and down to Kenmore. This would be a pretty easy paddle. Just let the wind do its’ stuff, and keep the board moving in the right direction. Unfortunately the wind was not doing what the BBC had told it to.

Rhona drove me to Killin, and helped me read the manometer on the pump, so that I got the SUP inflated to the right PSI. We then planned to speak via walkie-talkie radios, in 3 or 4 hours’ time, once I passed a section we called “The Hump”. This is where the loch turns a corner and Kenmore can be seen, (not by me), at the end of the loch. Rhona was not there to guide me, but just to check that I was still alive and hopefully get some footage. 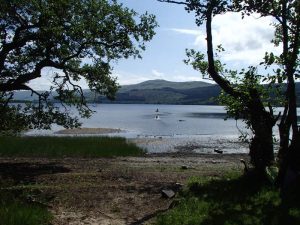 As soon as I launched from the Killin end of Loch Tay, I realised that I didn’t have a tail wind, but had a cross wind. The wind was blowing me into the shore I was planning to paddle along.

I wanted to try to keep 10-20m away from the south shore. This is easier said than done, when you can’t really see. I had to look for any clues I could find, such as glimpses of white rocks that would mark out the shore, was my paddle touching the loch bed, if so, the water was too shallow and I was getting too close, etc. Trying to do this, whilst fight a wind that wanted to blow me on to the shore, was not easy. On many occasions I found myself just a couple of metres away from the shore, and would quickly drop to my knees and start paddling out to the middle of the loch. (I kneeled down so as to give the wind less of a sail to blow in shore.) 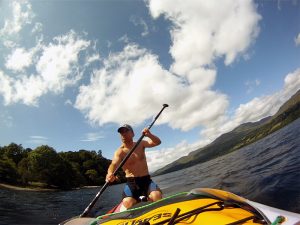 My good friend, (and awesome sea kayak adventurer), Patrick Winterton had once told me that on any long trips he tries to work hard for 55 minutes, then take 5 minutes to re-fuel and rest before starting his next 55 minutes. (It is great motivation to work a little bit harder when you know that you are just a few minutes away from a fuel break.) This was the reason I was carrying my speaking clock.

I also used this “bite-size pieces” method for distance goals. I would look ahead of me and try to spot something that really contrasted with the water. This would normally be a section of black coming from the land and disappearing into the loch. I would recognise this as some sort of tree covered peninsula, and would then aim to get there as quickly as possible. The down-side to this with my eye condition is that I couldn’t tell if this marker point was 10m ahead of me or 10km, so would just have to keep heading for it. This would just be another challenge to overcome. 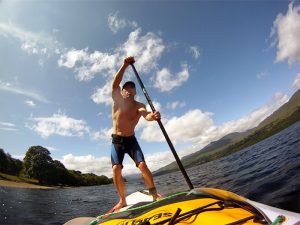 After 2 hours on the water I spotted a hill ahead. (What I actually saw was a big dark lump.) I thought this was the hill on the other side of the loch, just past “The Hump”. This was a great boost, and I picked up my pace hoping to round “The Hump” in maybe 30 minutes. However, after 45 minutes of paddling I then realised that the hill I was looking at was actually on my side of the loch, and I still had to pass it before I could get close to “The Hump”. This was a real downer. I had hoped to reach “The Hump” in 3 hours, but the cross wind was making this impossible.

After 4 hours on the water I rounded “The Hump”, and a few minutes later my walkie-talkie crackled into life. It was Rhona and she could see me from the beach she ad Stumpy were sitting on. It was a real boost to hear her voice, and also to know that I was on the home-straight. 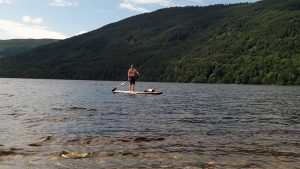 30 minutes later I spotted the Crannog Centre. This meant I was just a few minutes from the finishing line. This also meant that I had to be extremely observant now, as I would soon find myself among the moored boats in the bay. I didn’t want to travel all this way and crash into a parked boat just a few metres from the end. 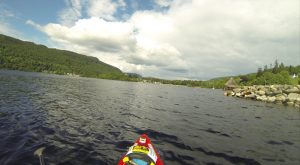 Loch Tays’ length is said to be 23.42km, but this is if you travel in a straight line down the middle of the loch. I didn’t have that luxury, and had to track the south shore. This meant going in and out of every little cove or bump. With this in mind, I think I probably paddled closer to 30km than 25km, and it took me 4 hours and 45 minutes. No speed record there, but hey-ho, it would seem that I am the first registered blind person to paddle the full length of Loch Tay, and I did it unguided!