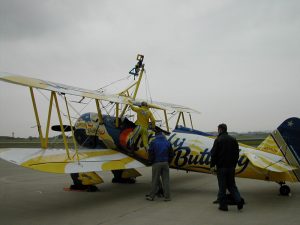 I can’t believe it was Utterly Butterly!

Wing walking is something I once saw on the TV programme, “Don’t Try This At Home”. After seeing this, I thought to myself “I’d love to try that!”

A couple of years ago I applied for a job as a wing walker, but was unsuccessful. That was the end of that, or so I thought. 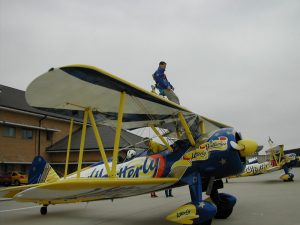 Then a few months ago, a local newspaper picked up on the story that I had been chosen to run in the Queen’s Golden Jubilee Baton Relay. During the interview, we talked about the different sports/activities I had done around the world. After talking about these, I was asked, “So, what’s next?” I had to stop and think for about 3 milliseconds,”I would love to do a wing walk!” 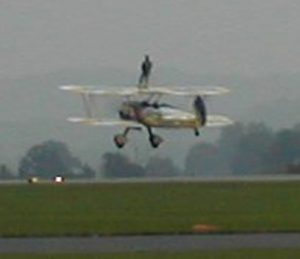 After the interview was over, I got straight onto the Internet, to start chasing another dream. I came across a company called Aerosuperbatics, and thought that I would give them a try. After contacting Rhiannon at Aerosuperbatics, she agreed to look into it for me. I was told that the Summer was their busiest time, so could I come back to them towards the end of August. 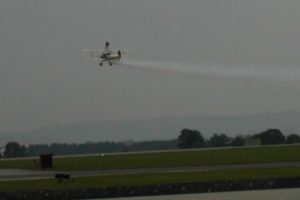 At the end of August, I contacted Aerosuperbatics again and was told that things were looking promising for the wing walk.

At around this time I was contacted by a charity who asked if I could help in some way to raise the public’s awareness of their charity. 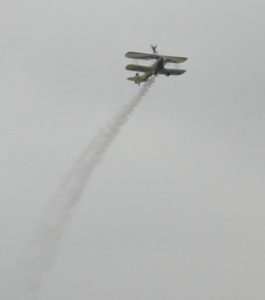 I explained the situation with the wing walk and we decided that this could be the ideal opportunity.

When the wing walk was finalized, the date and venue was to be Friday 20th September, at the Yeovilton Air Show in Somerset. 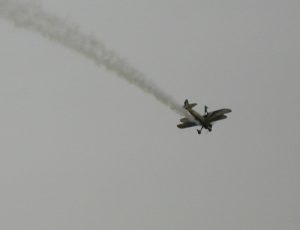 On the day of the wing walk, we set off from Exeter in the rain. This was not a good sign. But by the time we reached R.N.A.S. Yeovilton, the rain had stopped. The sky was still grey, but that was not a problem. 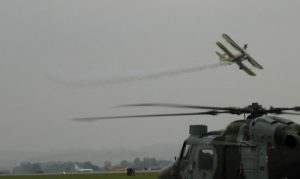 I met up with the team, by the brightly coloured Utterly Butterly biplanes. The team were wing walkers Sophie and Marie, and pilots Martyn and Mike.

After a short chat with the team, I was strapped to the stand, on top of the bi-planes’ wings. Then it was time for the propeller to start spinning and we headed off towards the runway. We stayed there for a few minutes waiting for the other air traffic to clear, and then we were off. 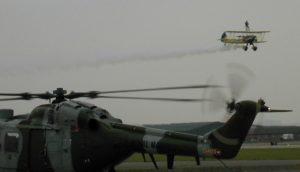 With engines roaring, we headed off down the runway, gathering speed as we went. All of a sudden, we were leaving the ground. As we started to climb, my face started to flap and I could feel my body being pummelled by the fast moving air. I had been told to wave my hands around to show the pilot, Martyn, and people on the ground, that I was having fun. I was so excited that I started doing my best “Saturday Night Fever” dancing. Waving my hands and generally making myself look like a pratt! If that wasn’t bad enough, I couldn’t get that damn Gina G song “Ooh Aah Just A Little Bit”, out of my head! How embarrassing is that? 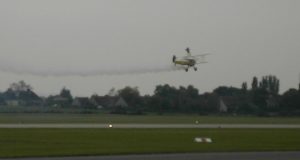 Anyway, once in the air, Martyn took the plane through some different maneuvers. These included banking the plane from left to right, climbing high in the air and then diving towards the ground. It was like being on a giant roller coaster! I was told later that we went through the range of -2Gs to +3Gs. This meant that as we up on a steep climb, my body was incredibly heavy, but as we went over the top, before dropping, my body-weight was extremely light. I think that is right. I didn’t really care, I was having an amazing time!! There was also a lot of low-level flying, where we were just feet off the ground! On a couple of occasions, Martyn opened up the smoke generators and we left smoke trails across the sky behind us. The whole thing was just unbelievable! There are not words that can describe how I felt. 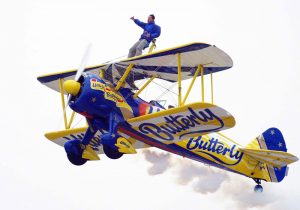 After about 15 minutes of this amazing trip, it was time to come down. It was only when I got down that I was told that I had been up there for so long. It had felt like just a few minutes. I suppose that I should have been a little cold but the amount of adrenaline that was flowing around my body, was more than enough to keep me warm!

As we came back across the tarmac, to meet the others, Martyn did some sort of handbrake turn with the smoke going. This meant that we appeared through a smoke curtain. A nice touch to end the trip! 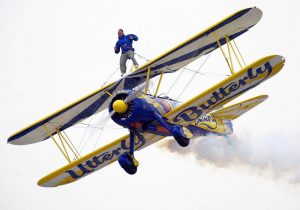 Once off the plane and on the ground, my shoulders started to ache. I worked out that this must have been my daft dancing. I had been constantly waving my arms around and dancing against the wind. Again, the adrenaline had masked all of the effort that was needed to do this. 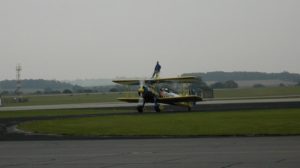 This flight will remain with me forever, and I would like to take this opportunity to say thank you to everyone who made it possible.

If you ever get the chance to do a wing walk, grab it with both hands. Alternatively, if you don’t want to do it, give me a shout and I’ll do it for you!! 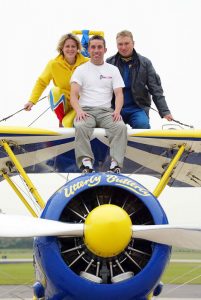 I would like to take this opportunity to thank Andy Bush, photographer with the Western Daily Press, for supplying me with some of the photos on this page. 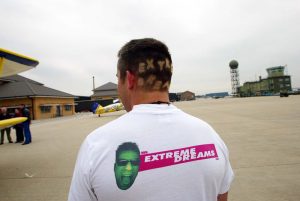 Aerosuperbatics are the people I did my walk with and you need to contact them if you are interested in doing a wing walk.