Quad biking may not be everyone’s idea of an extreme sport, but when you can only see 6 feet in front of you, it certainly feels like one!

I first tried quad biking in the early 1990s, when it was still relatively new. Some friends were heading off to do some quad biking and offered me the chance to go with them. Being a bit of an idiot back then, I decided that it was going to be best not to mention to the organisers about my eyesight. (This is something I do not do now.) 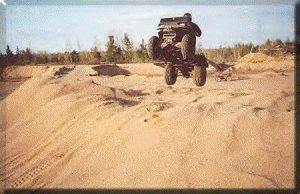 We arrived at the centre, got kitted out and were introduced to our quads. We were given a quick run down on how to operate them and were then sent on our merry way.

It was at this point that I realised I would need to follow someone around the course, otherwise I was going to get lost. I picked on my mate Jason. This guy is a giant of a man. He stands at around 6ft 5in tall and weighed around 18st. For some unknown reason, he is known locally as “Big J”. (I’ll let you work that one out.) So long as I rode my quad close behind him, I shouldn’t have any problems. What I was unaware of was that Jason had done a lot of quad biking before and that he was the fastest rider there. I was soon to discover this! 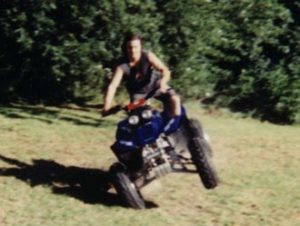 As soon as we were off, Jason took the lead, with me closely behind. We were going so fast, that I couldn’t actually see anything else around me. All I  could see was the big man in front of me. This was amazing! Every now and then Jason would take off into the air and all I could do was follow. Occasionally, he would go down and disappear, so I knew we were heading downhill. I was so focused on Jason, that I haven’t got a clue what the area around me looked like. 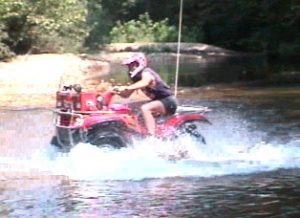 All was going well, until we went into the woods. We must have been in there for about 10 seconds when I ran into my first problem. I was still in behind Jason, when he took a sharp right-hand bend. I didn’t!! Bang! Straight into a tree. I wasn’t hurt and the quad seemed to be still working. I looked at the front of the bike and realised that the front left wheel was jammed against a tree. My best option, so I thought, was to try and bounce the bike whilst revving on the throttle. I did this for a minute or so, when suddenly something hit the back of my helmet. I turned to see the guy behind me, Adrian, covered from head to foot in mud. Whilst I had been revving, the wheels were spinning and kicking up loads of mud. Unfortunately, Adrian had just come around the corner and got plastered. Fortunately he hadn’t run into me, but within seconds he looked like the “Bog Man”. 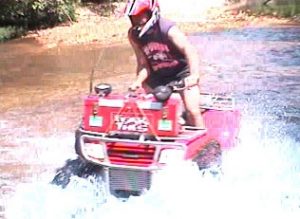 A short while later, I was back on track. Well when I say on track, I actually mean that I was crashing my way around the track. After a few more small bumps I crossed the finish line. When the guy came to check us out, Jason let it slip about my lack of sight. The guy asked me why I had not mentioned this before. I asked him would he have let me have a go if he knew about it. He said no. That is why I didn’t tell him. 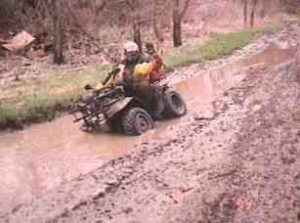 I had a fantastic time, but must take this opportunity to say sorry to the guys at the centre (which will remain nameless).

If your idea of fun is roaring around the countryside, getting dirty and having a great time, you really should try quad biking!

Unfortunately, I don’t have anyof my own photos of the day, so I would like to thank Mike from Extreme Quads for his permission to use his photos.