At the beginning of 2015 I received an email from a visitor to Extreme Dreams called Jo.  She said that she liked the site and all of the different things I had got up to, and that she had just seen something called Flyboard, and maybe I should give it a go.

I had previously come across Flyboard 3 or 4 years ago on YouTube.  2 years later I featured Flyboard on our “Kick Start Your Week”

It was after receiving Jo’s email that I remembered that a friend had told me that she had seen Flyboard in Mallorca.  Rhona and I were due to go out to Mallorca in April 2015, so I contacted Flyboard-Mallorca and booked my flight, hover, dive, whatever you call it. 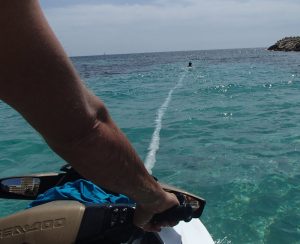 On Thursday the 23rd of April Rhona and I made our way from our rented apartment on the east coast of Mallorca to Puerto Portals on the west coast.  Here we met Tom who runs Flyboard-Mallorca.  After a quick introduction and chat, it was time to don a wetsuit and a buoyancy aid/impact vest and then get a look at the Flyboard. 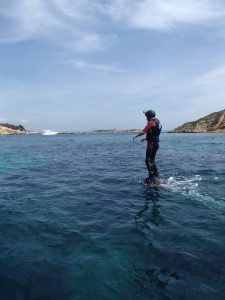 The Flyboard is a small platform, approximately 80cm x 40cm, fitted with what felt like snowboard bindings.  The bindings are on top of the board, and in the middle of the board on the underside is a giant hose pipe, measuring approximately 20cm across and 20m long.  The other end of the pipe is connected to a jet ski.  A few centimetres either side of this pipe are 2 downward facing nozzles, approximately 8cm wide.  The idea is that the jet ski sucks the sea water into the big hose pipe, which then travels the 20m along the pipe, exiting out of the 2 smaller nozzles, causing a powerful uplift.

Once I had had a grope around and understood the workings, it was time to head out into the sea.  Tom would be on the jet ski, with Rhona riding pillion.  How was I going to get out there?  I simply lay on my front, pointing my feet, (and the board), behind me, and then flew, swam, bodysurfed ahead of the jet ski.  That bit on its’ own was a lot of fun. 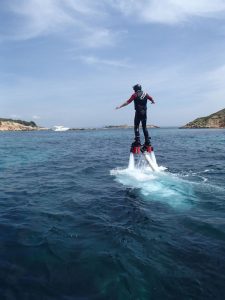 Once where we needed to be, the fun began.  The idea was to stand/float upright, with just my head sticking out of the water.  (The buoyancy aid/impact vest made this very easy.)  Then when I felt ready, Tom would turn the throttle and I should slowly rise out of the water and hover like a Flyboard god.  Just like that. 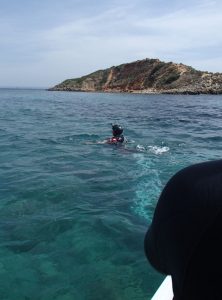 For some people it may be that easy, but for me it certainly wasn’t.  A key to this sport is balance, and a key to balance is being able to focus on the horizon, thus keeping your head and body straight.  As I can’t see any horizon, this makes things a tad harder.

For the first few minutes I floundered around like a drunken Rocket Man.  Tom had told me that everyone struggles at the beginning.  It takes most people between 2 and 5 minutes to get to grips with the Flyboard.  Unfortunately for me, 10 minutes in and I still wasn’t making much progress.  As soon as I struggled to get my body above the board, I would then lean slightly forward or backward and take off at a crazy angle.  Tom was constantly reminding me “flat feet, flat feet”.  He told me that it was all in the ankles. 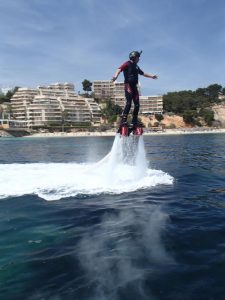 It was after this 10 minutes that I then remembered that as well as “flat feet”, Tom had also told me that when starting off, I should try to force the board down under me, rather than climb on top of it.  Bingo!  This was the key!  From then on I was able to control the Flyboard, and now I was getting airborne!  A few minutes later I even started to be able to steer myself.  I would force the board down, feel myself start to rise, then try to relax my body, (almost Zen like), and everything came together. 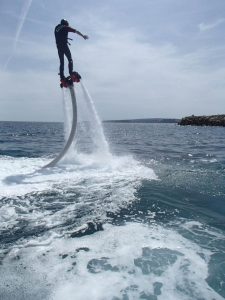 As the film and photos hopefully show, I had an awesome time!!  I also had a load of crashes, but then discovered why Tom had referred to the buoyancy aid also as an impact vest.  Considering the heights I dropped from and the speed I hit the water, I didn’t feel a thing.  Either a great vest or a massive injection of adrenaline.  (Probably a bit of both.) 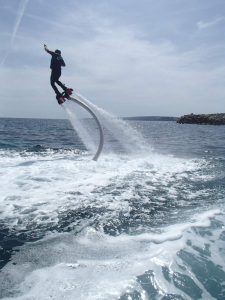 I also discovered that I was definitely Flyboard-Mallorcas’ first registered blind Flyboarder.  Since my trip, Tom has done some asking around and it looks like I am also the worlds’ first too!  Bonus!

So, if you ever find yourself in Mallorca, get yourself over to Flyboard-Mallorca and give it a go.  I’m sure you’ll have a blast!!