Paragliding looks like a cross between hang-gliding and parachuting. It is, I have been told, a sport that was adopted from a mountain rescue device, used to descend mountains. Using a paraglider, in the right conditions, it is possible to step off a mountainside and fly safely to the valley floor below, using the thermals to carry you. 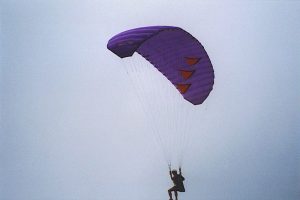 This should not be confused with BASE jumping. BASE jumpers leap off mountains, bridges, etc, and travel downwards only. Whereas paraglider pilots have the option to rise or fall, using the thermals. It is not unusual for an experienced paraglider pilot to travel over distances of 40 km, before landing. The world record is over 100 km. 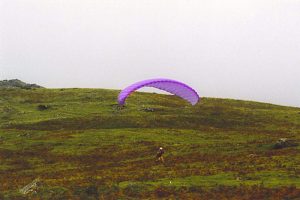 Early in the summer of 2000, I got in touch with the South West Paragliding School, based on Dartmoor. The owner is a really enthusiastic guy called Innes Powell. He is one of the UK’s top paraglider pilots and has represented his country at international level. His company offer taster days, at which you can go along and have a go at flying a paraglider. This is a great way to find out if this is the sport for you. 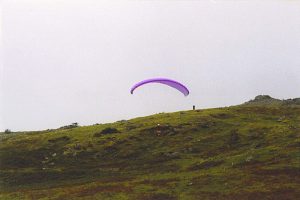 When I first spoke to Innes, he was a little concerned about my lack of sight and said that I may not be able to do my own flying, but to come along and have a go. If it was not feasable, he would take me on a tandem flight. Rhona, (then my fiance and now my wife), also wanted to have a go, so we booked up and went along to see what would we could do. 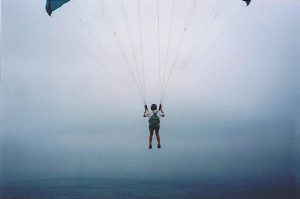 On meeting Innes, we knew that we were in good hands. He was full of positive ideas, and said that we could take the training slowly, and gauge it as we went along. The training is broken down into several steps. First, we would learn to fly the gliders at a couple of metres off the ground and work our way up to the big flight. We decided to see how each step went. 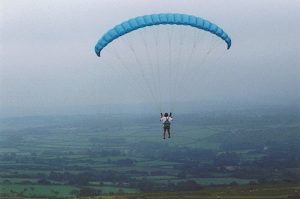 Innes has a way of making the training both fun and serious. At all times “safety” was the watch-word of the day. After each step of the training, we would talk about how we all felt. If anyone had any problems, they were discussed and resolved. So far, so good!

After doing several hours of training, it was now time to do the “Big One”. This meant taking your glider up to the top of the Tor, and stepping off. 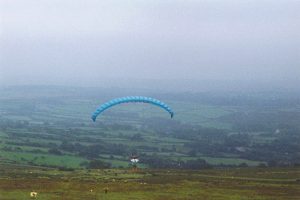 Rhona had serious doubts about the “Big One”, and decided not to do it. When she told Innes, he had a chat with her. They talked through Rhona’s worries, and she agreed to give it a try. Rhona told me later, that when she had landed after her first big flight, she packed her glider with super human speed, so that she could get back up on the Tor, for another go!

Thanks to Innes and his ingenuity, I managed to get airborne and had several solo flights with my paraglider. The feeling of floating, around 50+ metres, above everything is amazing. It is so quiet and relaxing. This must be how those big birds of prey must feel when they float around on the thermals.

If you have never tried paragliding, I recommend giving it a try. And if you are thinking about giving it a go, then give Innes at Southwest Paragliding a call.