Although this trip was advertised as ?Jungle Trekking?, we actually spent more time in a canoe, rather than on our feet. Due to the high temperatures, this turned out to be a blessing!

The trip started with a flight into Lago Agrio. This is an oil town in the North of Ecuador, on the border with Columbia. I later heard this town being described on the National Geographic Channel as ?a hell-hole populated by hardened drinkers and prostitutes?. That was a fairly accurate description!

Our hotel was very basic, and apart from the lightning storm, power cuts and two attempts by some locals to force their way into our room, the evening was uneventful. 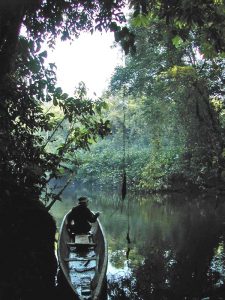 The next morning we met our guide for the jungle and told him about the previous night. He seemed genuinely shocked and thought that it had probably been an attempt at robbing us. Let?s get into the jungle with the snakes, spiders, chayman and piranhas. It?s a lot safer there!

4 hours later, after a very bumpy trip, we were in the jungle at a local family house. The plan for the day was to visit the local village and relax, before entering the jungle on the next day. We went over to the village, only to find that the village had gone out for the day. Oh well, it was Saturday and Chelsea were probably playing!

The following day we were off down-river in a solid wooden canoe. There was just the 3 of us, Rhona, Papoocha (our guide) and me. For the next 6 or 7 hours we paddled, pushed and pulled the canoe to our first camp. The river was full of fallen trees that lay across the river. Some of these could either be paddled around, over or under. However, some of them had been left in really awkward places. How inconsiderate!! J For these, we had to get out of the boat and pull it over/through. As the boat was made of solid wood and it contained our packs, tents, food, etc, this was not an easy job. (Never mind the temperature being in the mid 80s and humidity around 70%!!) We also had to make sure that we didn?t fall into the water, as it was full of piranhas! This was not a problem, as they only went for you if you had a cut. How likely was this, considering, we were pulling an old wooden canoe through sharp branches and thick undergrowth.

Fortunately Papoocha knew his stuff and at one point he headed off into the jungle with his machete. A few minutes later he came back with some large pieces of bark. He then soaked these in the river and hey presto we now had some ?Slippy?! When placed over the fallen trees in our way, the canoe could then slide over, with a lot less effort. Good man Papoocha! 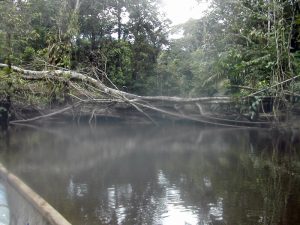 Later that day we tried to take a shortcut through some overhanging bushes.

This is where the red (Fire) ants lived. Tiny red ants, with a massive bite! Rhona and I found this out, the hard way. It felt like someone had put a lit match under our skin. The area around the bite (6-7cm) swelled up and remained this way for the next few hours. We also had a brightly coloured snake swim out to see us. Papoocha quickly flicked it away with his paddle. This turned out to be a very dangerous snake! If it bit us, we were dead!! Oh well, it beats a night in Lago Agrio!!

That evening we set up camp by the side of the river. The camp was made up of 2 tents and a large tarpaulin, which covered both tents. Our evening meal was tuna, rice and fresh vegetables, washed down with a really nice fruit flavoured hot drink. After our meal we sat in our canoe and washed the dishes in the river. As we dipped the dishes in the river, we could see the piranhas coming up to get any scraps. At one point there were around 10-15 piranhas swimming around us. 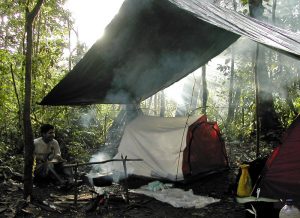 Unfortunately the heat of the jungle was too much for me. I had been told of this before we left for the jungle, but foolishly I thought that I could handle this for 5 days. Because of this, we were forced to cut our 5 day trip short by 1 day. On day 3 we made our way back up stream towards the village.

As we paddled up river, we could hear the monkeys travelling along the river banks. The sound was getting closer, until they were around 30 metres away from us. Rhona could see them all swinging through the trees and she said it was amazing. We were also surrounded by tropical birds calling to each other. And at one point we had a yellow butterfly leading the way for us and a beautiful blue one came and landed on my arm. This butterfly was around 4cm across and rested on me for over 20 minutes. 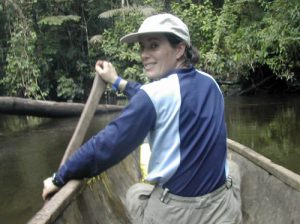 Papoocha stopped the boat at a large clearing and said that it was safe to swim here. Apparently this was a very popular fishing area, and there were only ?1 or 2 piranhas left here?. Nothing to worry about? It was great to get in the water and cool off. After a short swim, we were off again and back to the village

After an evening of explaining my sight problems and family planning, contraceptives, why we didn?t have any children, etc (in Spanish), we were off to bed. Our bus was due at 04.15, so we set our alarm for 03.15. At 03.25 the bus arrived and started honking its horn, to hurry us up. It was only 50 minutes early!! In the pitch black, we packed our rucksacks, dismantled our tents and somehow crossed a very narrow tree-trunk bridge, all in under 15 minutes! We had a 5 hour trip ahead of us, through which Rhona spent most of the time sleeping. Lucky so-and-so!

From here it was off to the airport and get out of Lago Agrio!! 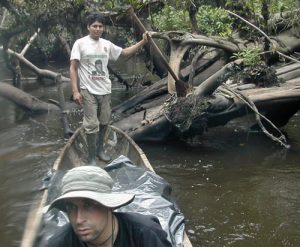 As I am sure you have realised from my mutterings above, this was not the best trip in the world for me. But before you scrub this off your wish list, let me tell you that the only reason I didn?t like it was because of the heat. I am a real wimp when it comes to heat, and unfortunately I thought I was stronger than I actually was. Rhona had a fantastic time, and so long as you don?t mind the heat, I am sure that you would love it to! My only advice would be ? DON?T SPEND A NIGHT IN LAGO AGRIO!!

This trip was organised by
Sixto Perez, of Conquistour, in Banos, Ecuador.