If jumping off 7 metre high cliffs, sliding down natural river slides and being lowered over 15-20 metre high waterfalls is your idea of having fun, then the extreme sport of canyoning is probably right up your street. I was recently lucky enough to do all of this and more with the guys from Nae Limits, on a staff training day. The photos are taken from a video that was shot by Muzza of theZambezi.com. 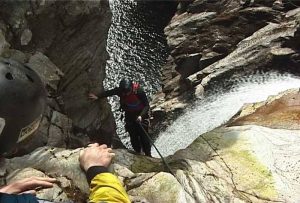 Our day started with a safety and equipment briefing from John, (the chief instructor/owner of Nae Limits), at the Nae Limits centre, on the bank of the river Tay, in the picturesque town of Dunkeld in Perthshire, Scotland. Once we were kitted out with wetsuits, neoprene socks, life jackets and helmets, we headed off to the canyon, just a few miles away. 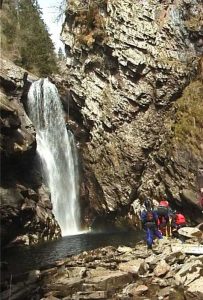 Once at the canyon, we once again went through the safety guidlines. After this was done, it was time to enter the canyon. 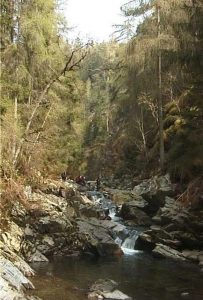 After a wee bit of scrambling, we came to our first obstacle. The river was about 10 metres below us and we had to enter it. There was a sloping slab of rock, approximately 3 metres long, which we had to run down and on reaching the end of this, we were to leap into the river below. One at a time, we did this. I was told, because I couldn’t see where I was going, to take 5 fast steps and then leap. A little bit nervous, I did this. Richard, one of the guides, was spot on. On my fifth step, I leapt off into the air and splashed into the water below. Awesome!! 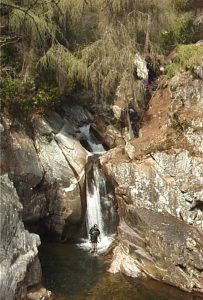 From this leap of faith we made our way to the first big waterfall. This was around 15-20 metres high. We were to be lowered down there by rope, one at a time. As I went over the edge, the water was flowing past me at a steady pace. A few more metres down and I was in the waterfall. It was deafening! At the bottom of the waterfall, I was met by Spud another instructor, who unclipped me from the rope and guided me the shore. 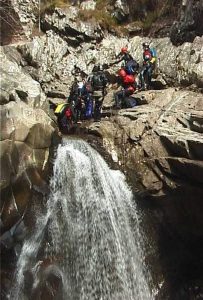 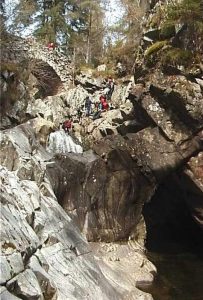 This was an amazing day out with the boys. Nae Limits are very lucky to be able to run several different canyons nearby, so if this sounds too much for you, they are bound to be able to find something that will suit you.