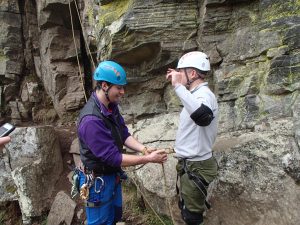 In 2018, I was please to receive an invitation from Craggan Outdoors, the award-winning outdoor centre based at Grantown-on-Spey in the beautiful Cairngorm National Park, to see if there were any of the 24 activities that they offer that I fancied adding to the list of those that I’ve previously undertaken. As my wonderful wife Rhona would be driving me there, Craggan Outdoors’ owner & Managing Director Keith Ballam was kind enough to extend the invitation to her aswell.

The activities we chose were rock climbing and archery. This is a wee write up about the climbing. 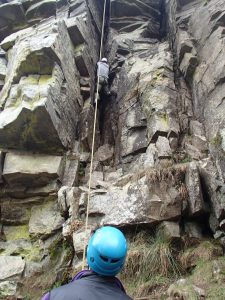 On arrival at Craggan Outdoors we were met by Keith, Dan, and Ashley. Dan and Ashley were to be our instructors for the day.

From here we took a 10 minute drive, through Granton-on-Spey, to Huntly’s Cave to start the climbing. As Dan set up the ropes, Ashley helped Rho and I get into our harnesses and helmets. I had also brought a set of elbow and knee pads along with me, as I tend to bump into things a bit more than those strange “sighted” folk!

From here we then headed down a steep, narrow and winding path to the foot of our first climb – Hanging Groove. 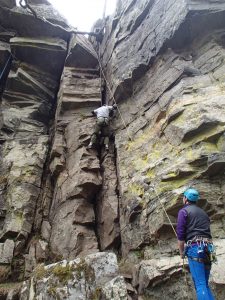 Dan then gave us a talk through what the route looked like and told me about a big nose sticking out, (not mine), that we would have to navigate around half way up the climb. The height of this climb was about 15ft. Once the description was finished, I was connected to a rope and then lead over to the foot of the climb. This climb was fairly easy, and apart for the nose, was straight forward.

Once at the top, I was then told to lean back and slowly walk down the rocks, whilst Dan fed out the rope and lowered me down. 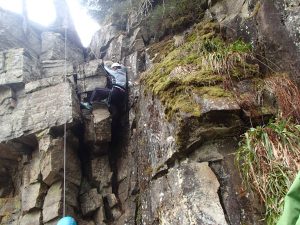 At one point on the lower, I mis-stepped and swung in toward a sticky out rock, which almost got me, (where a guy doesn’t want to be got). From here on in, I always had one hand off the rope ready to protect!

After me, it was Rho’s turn, and she was up and down it in a flash.

The next route we did was to the left of our last climb, and was called “Right Hand Groove”. This one was a little higher, at 22ft, and a bit more technical. The “groove” was very inviting, but Dan told us not to go too far in, as it would then be hard to move around in the narrower space. Half way up, I was thinking that I must be a natural climber, as it was pretty easy. Then I stopped. I had gone too far into the groove, and just like Dan said, things got a bit tight. Thanks to Dan and Ashley’s advice from below, I managed to get myself out of that one. (That’ll teach me to get too cocky!)

Again, at the top, I leaned back and slowly walked down the cliff. 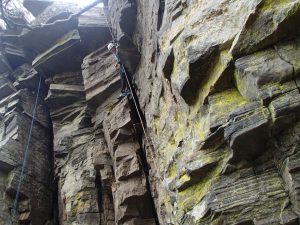 After Rhona had done her climb, Dan gave us some advice about using our legs more, and keeping our upper bodies further out from the cliff face. Spot on advice! Sure enough this worked a treat.

After a second go on “Right Hand Groove”, we then moved over to the last climb of the day, the 29ft “Slot Direct”. At 7ft higher than the previous climb, and the 4th climb of the morning, I could certainly feel that I had been working muscles I don’t normally use.

After lunch, it was time for some archery! 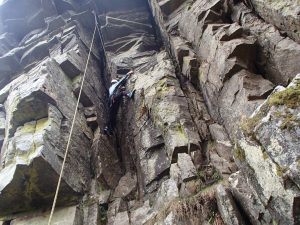 I’m sure to those of you who regularly climb, this wouldn’t be too challenging, but to novices like Rhona and I, this had been very exciting!

I’m still not sure whether being blind when climbing was a blessing or a curse. The downside was that I couldn’t see the hand or feet holds, so instead of just looking a grabbing, I had to spend time running my fingers across the rocks like a manic Itsy Bitsy Spider before finding a good hold, and this was quite tiring on the other limbs. But the upside was that when I reached the top, there was no point in looking down as I wouldn’t see anything, so fear of heights wasn’t an issue!

My thanks go out to Dan and Ashley who were awesome instructors, both enthusiastic and patient! And if you fancy a great day out in beautiful surroundings, I would highly recommend a visit to Craggan Outdoors! With the massive choice of activities, I’m sure there will be something there for everyone! Thanks guys!