Tandem skydiving is a great way to enjoy parachuting and free-fall, without having to go through all the stress and hard work of parachute training.

I had a go at this in the Summer of 1998. The jump was with the Devon & Somerset Parachute School, (now Skydive UK Ltd), located at Dunkeswell Airfield near Honiton. 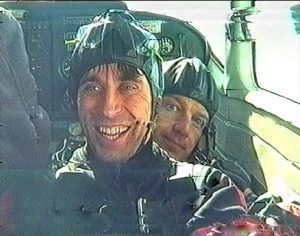 On arrival I was introduced to my buddy – Dave Mclaughlin. Dave was the guy who I would be attached to and had the parachute, so I decided the best policy was to be friendly and not upset him. I was then kitted out in a one-piece jumpsuit, helmet and goggles. After this Dave took me through the kit that would keep us hooked onto each other. It didn’t seem like much, but he assured me that it would do the trick. I thought to myself, if it doesn’t I shall just have to fly like a penguin!

We then went through the jump procedures. Exiting the aircraft would take place at over 3,000 metres, free-falling to around 1,700 metres. At this point the parachute, (or the technical term, chute), would be opened and we would float slowly down to earth. And that was that. Sounds simple. All we needed now was a break in the clouds to jump through. 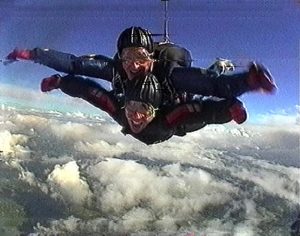 When the time came, we piled into the plane and headed for the sky. The journey to 3,000 metres took around 10 – 15 minutes and was not the most comfortable flight I have ever taken. Because you are attached to your buddy as soon as you enter the plane, you have to sit between their legs. Not a lot of room!

Just before we reached the designated height, Dave mentioned the somersault. What somersault? “Oh, yes” he said, “I forgot to tell you, that is how we will exit the plane”. At this point I started to worry. A somersault at 3,000 metres, that was a novel idea. I worried about my breakfast, and whether we may be reunited? 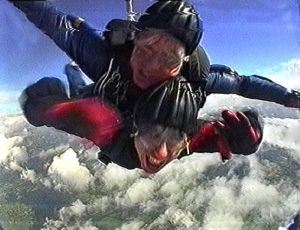 There was nothing to worry about. The exit went well. As we left the plane there was a rush of wind and an amazing feeling of weightlessness. The air was rushing around us and the adrenaline was pumping through my body. This was probably the first time I had ever felt such a rush, but was not going to be the last. We fell for around 20 – 25 seconds before deploying the chute. We had traveled around 1,600 metres at 120 kph. The next 1,700 metres were going to be at a more sedate pace. Dave put us into a couple of controlled spirals on the way down, just to keep the adrenaline flowing. 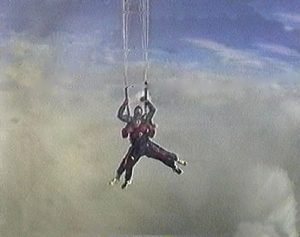 I did my skydive as a sponsored event to raise money for the local blind school, so the jump cost me nothing. It was an amazing day, and I hope to repeat the experience again one day.

If you are interested in doing a tandem skydive or a solo parachute jump, check out the Skydive UK Parachute School or have a look at the Extreme Dreams Links Page.