So here I am, a registered blind guy, who is not allowed to drive a car or even a motorcycle, as I may cause danger or damage to other drivers and/or myself.

So what the heck am I doing dressed head to toe in camouflage, at the controls of a 13 tonne Fv432 Armoured Personnel Carrier!?!

Well, I’m certainly doing a lot better than the owner of the Fiat Punto I just drove over!! 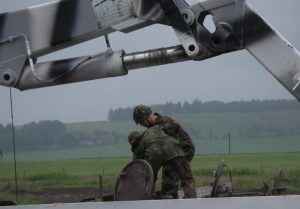 It all started when I received a phone call from Rod Sim of Tank Driving Scotland.  He had read an article in the local newspaper about me and my adventures, and as he is from Blairgowrie, (where we are based), he invited me to come along and have a wee drive.

We arrived on a damp late June morning in 2011.  It had been raining heavily overnight, (as it does in the middle of British Summertime), and the off road course we were about to drive along was full of waist deep puddles.

Before we got into our vehicle, I was given camouflage coveralls and helmet to wear.  The coveralls made sense, as I knew I was likely to get dirty, but the camouflage helmet felt a little bit over the top.  However, there was method in their madness. 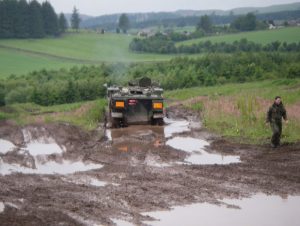 Starting on the flat

Once kitted out, Rod lead me over to the beast.  (I’m referring, of course, to the Fv432 armoured personnel carrier, and not Rhona, who had headed off to take some photos from the viewing gallery.)

To get to the driver’s seat, we would need to clamber in through the back door, walk through where the troops would be seated, step onto a seat to climb out through a hatch, and then lower myself into the next hatch, down on to my driver’s seat.  Surrounded by solid lumps of steel, it was now clear why we had to wear the helmets.

Now sat in the driver’s seat, I was able to feel my way around the controls.  Rod was laid down on top of the vehicle, just at my ear level.  He explained where the leavers, foot pedals, and gears all where and how they worked. 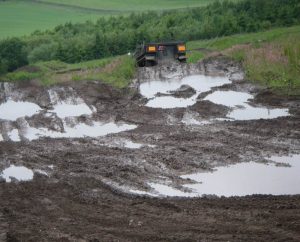 The first thing I noticed was there was no steering wheel.  Steering would be done via 2 brake leavers.  To go left, you would stop the left tracks moving and power up the right tracks.  This would pivot the vehicle to the left.  And to go right, you would do the opposite.  All very strange.  I understand the origin of this comes from the old cavalry horsemen days.  When tanks were first designed, they were designed to take the place of horses on the battlefield.  Thus the horse riding cavalry would be given the job of driving the tanks.  To keep things simple, the controls would be similar to those of steering a horse – pulling on the reigns.

Once all this was explained, Rod started up the engines and we were off.  We started with some basic forward backward moves, and some turning.  From here it was on to the track and start playing in the mud.

Not being able to see where I was going, Rod shouted out the directions.  I was able to make out some of the puddles, but was told that when approaching these I should slow down, as some of these puddles were very deep, and if we were to hit them hard, my face may make contact with the hatch.  As the hatch was made of solid steel, it is unlikely that my face would come off too well. 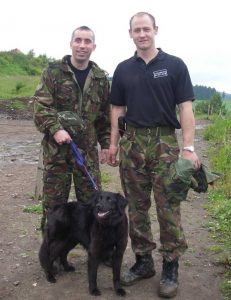 After doing a circuit around the big track, Rod directed me onto a more lumpy track.  Here we would climb up small steep hills, see-saw on the top, and then drop down the other side, normally heading into a puddle, before hitting another uphill.  Not being able to see this very well made for a very interesting drive.  I would just be getting used to climbing, when the nose of the tank would drop over the edge, and we were now heading downhill.  Then just as I was getting used to the downhill, we were climbing back up again.

The grand finale was when Rod directed me into the middle of the track.  As we drove forward, Rod directed me to slow down.  There was a little bump, and then we moved forward.  “Hit the brakes”, said Rod.  Sitting at a slightly tipsy angle I asked what was happening.  It turned out that we had just driven over, and were now sitting upon a Fiat Punto.  The Fiat Punto was now a very FLAT Punto!