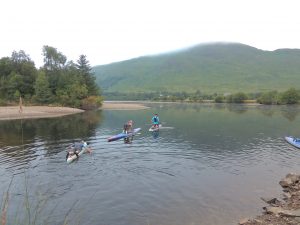 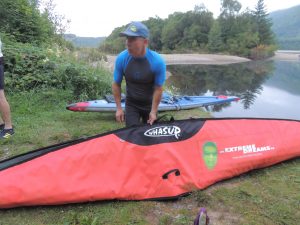 Since taking up prone boarding (a.k.a. prone paddling), in 2019, I had several challenges in mind. This was one of them.

Over the last few months, the little sight I have, has got worse, and I thought that this would be my last “solo” adventure. Unfortunately, when I arrived to attempt it at the end of May, due to poor weather conditions, and further sight issues, it wasn’t to be. So, on the 25th of July I was joined on the water by Niall, Alison, and Allistair who would be guiding me from their SUPs, and a land support team of Ann, Rose, and Rhona.

The plan was to be the first person ever to prone the full length of the UK’s longest freshwater lake/loch. Although Loch Awe is pretty long, (supposedly 41km), the distance was not my main worry. I love the cold. (The first time I SUPed Awe, it was in the middle of a sleet and snow storm, and it was great!) Unfortunately, I don’t cope well with the heat, and the forecast for this trip was “HOT”! 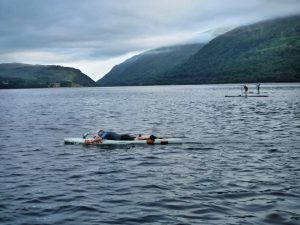 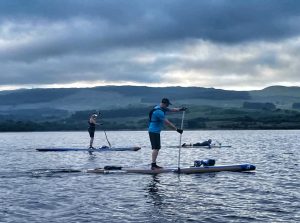 At 4.30am, Alison and Allistair launched their SUPs from Loch Awe Boats and did a 10km warm up to meet the rest of us for a six o’clock start at Kilchurn Castle, at the north end of Awe. The sun hadn’t burned through the clouds yet, so I decided to get as many Ks in as I could before it got warm.

By 12km it was starting to get hot, and by 15km I was starting to struggle. I was drinking every 2k, and trying to splash myself to keep cool. I had been closing my eyes for 20 to 30 strokes, and opening them for 10, so as to not strain them, (this has been an issue on previous challenges), but in fact I felt myself starting to fall asleep!

For the next 5 or 6km, I played all sorts of mind games, trying not to fall asleep or think of the heat e.g. counting strokes, interval training, reaching further forward, etc. 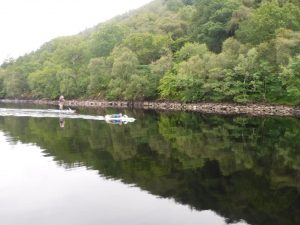 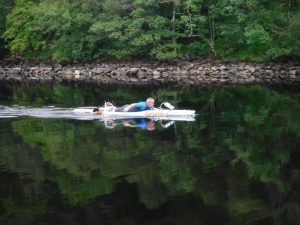 At around 21km, we stopped for a lunch break. Here we took around 20 minutes to re-fuel and relax.

After refilling my bottles, I got stuck into some Biltong. (A South African friend told me that her local butchers in Crieff, Kenneth Allan, were making their own Biltong and selling it at my local butchers, Irvine’s in Blairgowrie. Being a meatarian, this is the perfect snack for me when on the water!!)

I threw a load of Biltong in my mouth and had a very big drink. Then to help with the cooling down, I went for a wee swim. By the time I was finished, I was starting to feel cold. Perfect!

For the next 12km, the sun kept coming and going, and I tried to keep a reasonable pace. However, at the beginning I had been paddling at just under 7kmph, and now I was closer to 5! 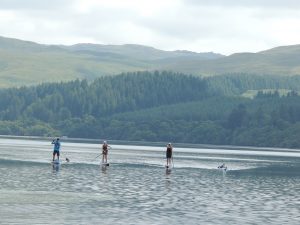 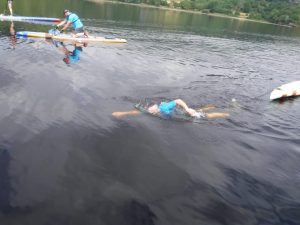 At 34km, I’d had enough, and decided another swim was required. This time I kept my leash on, and spent the next 5 minutes swimming and towing the board behind me. This did the trick.

Once I had cooled down sufficiently, I was back on the board, and squeezed the last few kms out.

Most prone paddlers spend the majority of their time on their knees, with just short spells lying down. As I’m still not very good at proning, I did the full Awe trip lying down. Maybe one day I’ll be able to do it properly!!

If you Google “how long is Loch Awe”, it will tell you it is 41km. This was my 6th trip on Loch Awe, (the other 5 are listed at the bottom), and I’ve never yet done 41km. But between Niall’s Strava and my Endomundo I had proned 37.8km, (with a moving time of 6 hours and 2 minutes). 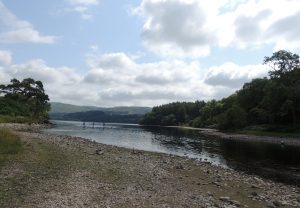 As I mentioned earlier, due to my sight decreasing, I’ve possibly come to the end of my “solo” adventures, but if that means I’ve got to do my future proning with this team, I can live with that!!

Thanks to the water and land teams, (I literally couldn’t have done it without you), and also thanks to Janet and Cliff at Loch Awe Boats.