The Human Catapult falls into the catagory of “Dangerous Sports”. Like all of these sports, there is a certain amount of risk. Sadly, that risk was brought to light on the 24th of November, 2002, when a young man was killed whilst participating in this activity.

The organisers of the Human Catapult have now closed it down 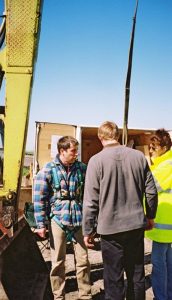 Below is an account of my experience whilst visiting the Dangerous Sports Club’s Human Catapult site.

A Human Catapult! Who on earth would come up with such a crazy idea? It has to be those complete nutters at The Dangerous Sports Club. The idea is totally mad, but it does work. I know because I have done it!! 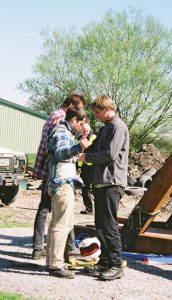 The Dangerous Sports Club have been doing crazy things since the 1970s.. These are the guys to blame for the bungy jump, amongst other things. On April 1st 1979, David Kirke and some other members of the club through themselves off Cliffton Suspension Bridge in Bristol, on a homemade bungy cord. 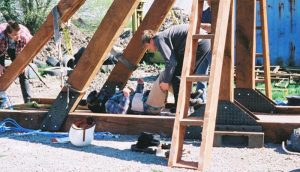 Since their bungy jumping days, the club have kept themselves busy with all sorts of wild and wacky adventures. To carry out these wild adventures they have enlisted the help of hot air balloons, hang gliders and a large inflatable pink elephant on skis, to mention just a few. This gives you an idea of what sort of people make up the ranks of The Dangerous Sports Club. Over the last few years, a couple of the club’s members, David Aitkenhead and Richard Wicks, have been focusing their efforts on designing and building the Human Catapult 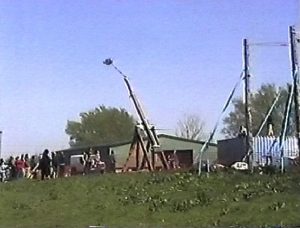 The Human Catapult is based on the same design as a medieval trebuchet. Trebuchets were military weapons used in Siege Warfare. The general idea was to use this device to throw stones and other missiles over the walls of a fortress in order to break the siege. 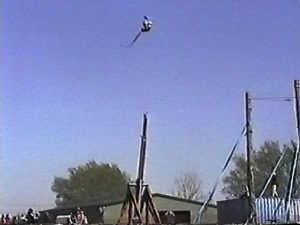 I had heard about the catapult a couple of years ago, but things had gone quiet for a while. It was the guys from the Dangerless Sports Club who e-mailed me to let me know that it was now up and running. They were hoping to go along and have a look and asked me if I was interested. Too right, I thought! 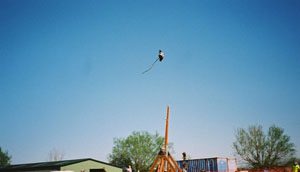 I went along to the Human Catapult with Rhona and my wee sister Nicky, partly to have a look, but I had already decided that I was going to do it. When we got there I had to fill out the usual paperwork, disclaimers, etc. Then it was time to be weighed. This was done with all the safety equipment on, to get an accurate weight. 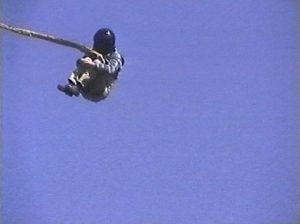 The safety equipment I was given included a harness, a kidney belt, neck brace and a crash helmet. I had worn a padded shirt and heavy work boots to give myself some extra protection. I was aware that the landing, on a net, may be a little uncomfortable.

I was then given the safety briefing. The long and the short of it was simple. Roll yourself up into a ball and don’t unroll until you have stopped bouncing on the safety net. So long as you adhere to this simple rule, everything should be plain sailing! Whilst I received this briefing, a test weight was loaded and thrown. 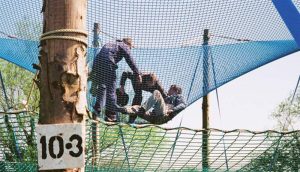 All the talking was done before I was strapped in. The idea is, once you are attached and assume the position on the ground, they count to 3 and then you fly. This doesn’t give you time to get scared. They know what they are talking about. Once you are on the ground you do tend to think about what you are going to do.

Before I knew it, I was airborne. The action was surprisingly smooth. I was in the air for 3 to 4 seconds, flying at around 70 kph. I did a couple of somersaults before I hit the net. The landing was a little heavy and I realised that a pair of thick gloves may have been a good idea. But if a slightly grazed wrist was my only injury, I could hardly complain!!