This was a charity event to raise money for the Royal National Institute for the Blind, (RNIB), and was advertised as a “1,000ft Zip Slide”. I have done a few different things for charity and thought it was about time to do another. 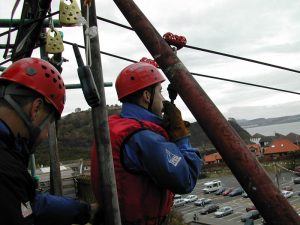 The zip slide was to take place at the North Queensferry “Seaworld”, in Fife, Scotland.

On arrival, we had to check in and sign the relevant paperwork. Then we were kitted out with harness, helmet, gloves and buoancy aid? The latter was a bit of a surprise. We must be going to play near the water 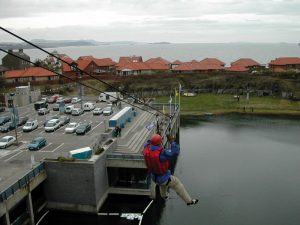 Sure enough, when we were driven up to the zip slide tower, we could then see that we were about to zip across what the instructors referred to as “The Shark Pool”! 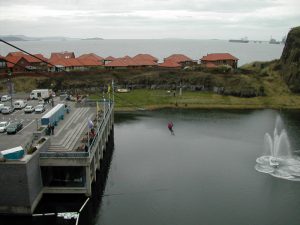 !Once at the tower, we were taken, one at a time and strapped in. There was a safety line attached to the harness and we were told to hold on to the two horizontal lines in front of our face. From here, it was one wee step off the edge of the tower and off we go, zipping across the shark pool!This wasn’t the scariest thing I have ever done, but it was a great way to raise money for charity.

If you fancy raising money, in a fun way, for the RNIB contact the RNIB and see what events they have coming up.