Until May 2009, my sea kayaking experience was limited to a couple of 1-2 hour guided paddles around North Uist and Skye, and a couple of holiday rental trips.  The biggest waves I’d ever encountered were no more than a few inches.

Over the next 3 months I was to spend a lot of time training in our sea kayak on Loch Tay.  Starting off with a 2 hour paddle, building up to be able to do a comfortable 5 hour paddle, averaging around 6km per hour.  I knew this expedition was going to be tough, so if I could at least be paddle-fit, that would hopefully be one thing less to worry about.

The initial plan had been to sea kayak out to St Kilda, (just over 50 miles off the west coast of Scotland).  However, the weather would be against us, so we ended up doing a smaller, but very exciting expedition around the southern Western Isles of Scotland. 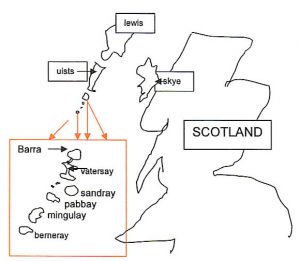 The trip was organized by the highly experienced sea kayaker *Patrick Winterton, and would consist of 2 two-man sea kayaks.  As the novice, I would be in the front of our boat, with Patrick behind me, and in the other boat would be Jane Mellor in the front, and Bennie MacDonald in the back.  Jane was a novice like me.  She had done a little sea kayaking, but nothing major.  However, Bennie was like Patrick, with huge experience in sea kayaking, getting out on the water almost every weekend, all year round!  He had paddled around most of the Outer Hebrides, several times.  Rhona was also involved, as part team medic, and part mother.  When we were out paddling, she’d be organizing ferries, keeping in touch with the Coastguard, and generally keeping a watchful eye over us.

The expedition started at the end of July 2009. Patrick Jane, Rhona, and I picked up Bennie in the Western Isles and camped the first night in Vatersay. 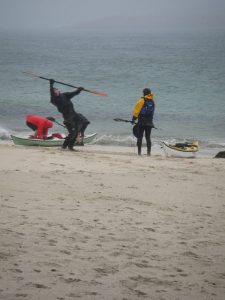 Bennie demonstrates how to roll.

The next 2 days were spent getting to know how the boats and teams performed together.  Starting off with a flat paddle across the bay at Vatersay, and then turning out into the bigger water.  As I said earlier, I’d never been in any “big” water.  Well, this was all to change.  As soon as we left the safety of the harbor, the waves arrived.  The first few were only 3 or 4 foot high, but to me they felt massive.  Poor Patrick had to keep telling me to relax.  Every time I felt a wave, I’d tense up, and apparently Patrick could feel this through the boat.

As we started to head around the islands, the waves got much bigger!  I tried to relax, but it did not come easily.  We paddled from Vatersay to Sandray, where we got out of our boats and had some food.  Up until then, the biggest waves had been no bigger than 6ft. 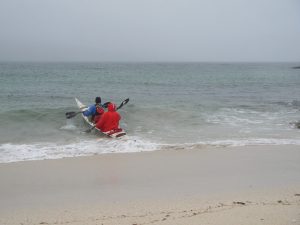 Deano and Patrick heading out from Vatersay

After lunch, we headed to the southern tip of Sandray, and turned into the wind.  Instantly the waves started to become bigger!  I tried to stay as relaxed as I could, which wasn’t very easy.  Patrick had told me that the most likely outcome of me tensing up on every wave we hit, would be that I’d capsize the boat.  I certainly didn’t want that.

Within a few second of turning the corner, Patrick spotted a Basking Shark ahead of us.  It was about 100ft away, and coming in our direction.  Bennie and Jane had also spotted it, but I couldn’t see that far.  A few seconds later, and it was only a few feet away from our boat.  I could make out 2 fins sticking out of the water.  Then as it was parallel with us, it turned at right angles, and came directly at us.  It was like something from “Jaws”.  The fin was cutting through the water, leaving a wake behind it.  I had 2 voices in my head.  One was saying “it’s a shark, and it’s coming straight at us”.  The other voice was saying “it’s only a Basking Shark, and it is harmless”.  As I was wrestling these voices, the fin came within 2ft of the boat, then dived under us.  Patrick watched it beneath us, and reckoned it was over 30ft long!!  What a whopper! 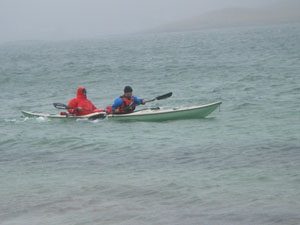 Deano and Patrick off Vatersay

A few minutes later we hit even bigger waves.  These monsters were over 30ft, and were “breakers”.  (All of the other waves had been clean topped, but “breakers” are waves with broken, white, tops.  These are much harder to paddle in.)  At this point I’d never experienced a “breaker” before, and at 30ft, this wasn’t the best place to start!  As these were so big, we had to turn around so that they were behind us.  This was, (and probably still is), the scariest thing I’ve ever had to do in a sea kayak.  Using the turning technique we’d been practicing, we were round in a few seconds.  However, all this meant was that the breakers were now coming from behind.  We still had to keep the boat in the right direction.  Any one of these monsters could grab us and flip us over.

These waves were so big, that on several occasions, we lost sight of the other boat, and on one wave, Patrick was convinced the other boat had been flipped.  A few seconds later, they re-appeared.  Safe and sound.

After a few more of these breakers, it was agreed that we should get back around into the shelter of Sandray.  A couple of hours later, we were back on the beach at Vatersay. 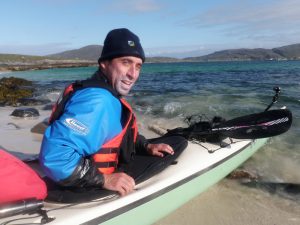 The 2 days of training had really paid off, and we were now ready to paddle the 19 miles down to Mingulay.  It was expected to take around 4 hours of paddling, including a short food break on Pabbay.  Rhona was getting the tourist boat from Barra to Mingulay, and would meet us there.

With the sun shining, and a clean swell of 15-20ft, this trip was going to be extremely enjoyable.  We kayaked along the east coast of Sandray, which felt fairly sheltered.  We then crossed from Sandray to Pabbay, where we’d hit the big breakers a few days earlier.  The water was still pretty choppy, but nothing as big or as scary.

The crossings between Sandray and Pabbay, and Pabbay and Mingulay were potentially very dangerous.  The water coming through these gabs was moving very fast, (as it was part of the Atlantic Drift), and any minor error could spell disaster.  If we were to capsize here, and not right ourselves immediately, we could be swept some distance off course, within just a few minutes.  So extra care was called for on these crossings, with constant bearing checks. 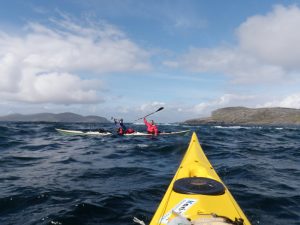 In fact, with all this going on, the whole trip was pretty straight forward.  As we arrived on the coast of Mingulay, Patrick had something to show me.  We paddled down a narrow channel, with hundred foot cliffs either side of us.  It started off very calm, but as we turned a corner it all changed.  From flat as a pancake, in a blink of an eye, we were into 5ft head on waves.  The front of the boat would rise steeply, and then lunge forward over the edge.  Then the narrow channel opened up, and the waves got really big.  We were in an area about 30ft across, and the waves had doubled in size.  However, the waves were no longer coming head on.  They were bouncing off the cliffs, and seemed to be hitting us from front, left, right, behind.  There was no logic.  The boat was just getting thrown around.  We did this for a couple of minutes, then turned around and headed back through the channel.

From here, we paddled around the coast, catching up with the others, and then headed in to the beach..

The sun was shining, and it was hard to think of anywhere I’d rather have been in the world.  Scotland does get a lot of crap weather, but when the sun is out, the Western Isles are beautiful.  But, as is the nature of the Scottish weather, the next day the sun was gone, and a storm had arrived.  We’d planned to paddle back to Vatersay that day, but there was no way we could do that in these conditions.  This meant spending a day in a tent, listening to the howling wind, and pouring rain.  Only leaving your tent for a call of nature. 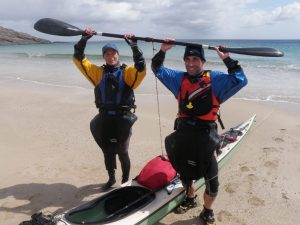 The following morning the storm had cleared sufficiently for us to leave Mingulay and get back to Vatersay.  Apart from a bumpy launch, the paddle back was relatively uneventful, and was done without a break.

This had been my first introduction to “real” sea kayaking, and I had really enjoyed it.  Maybe 2010 will see us get to St Kilda! 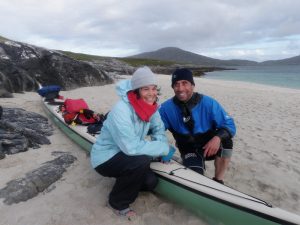 Back with the boss (Deano & Rhona) – Photo courtesy of Patrick Winterton

*Patrick Winterton is a highly experienced sea kayaker.  I first became aware of him via the BBC’s “Coast” TV series.  He has made several sea kayaking DVDs, including the great “Scottish Extremities”, which covers his expedition around Scotland’s islands.  https://www.patrickwinterton.com/

In July 2009, Patrick Winterton and Mick Berwick made the first kayak crossing from Scotland to the Faroe Islands.  https://www.paddlefaroes.com/