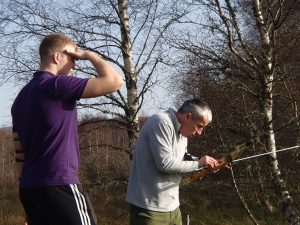 In 2018, I was please to receive an invitation from Craggan Outdoors, the award-winning outdoor centre based at Grantown-on-Spey in the beautiful Cairngorm National Park, to see if there were any of the 24 activities that they offer that I fancied adding to the list of those that I’ve previously undertaken. As my wonderful wife Rhona would be driving me there, Craggan Outdoors’ owner & Managing Director Keith Ballam was kind enough to extend the invitation to her as well.

The activities we chose were archery and rock climbing. This is a wee write up about the archery. 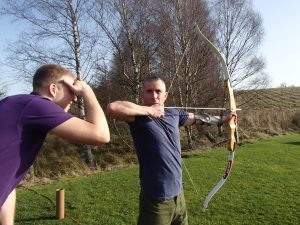 After the mornings’ climbing session and a spot of lunch, Rho and I headed back to the centre where we met up with Dan and Ashley again. Here we picked up a selection of bows and arrows, and then made our way to the archery site, passing by the small private loch that Craggan use for kayaking, canoeing, raft building, and other water-based activities.

Once at the archery site, Ashley took the lead instructor role. He showed us where and how we should stand, and explained the safety regulations they have in place.

He then talked us through the different parts of the bow, about the arrows, how to load them on to the bow, and the correct way to fire it. Rhona watched Ashley as he described everything, and I was given a bow so I could feel the different bits as Ashley described them. 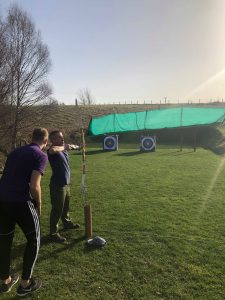 Then we headed over to our firing positions, where we stood with our feet either side of the designated line and fired at our targets 10 metres away.

I always wear a baseball cap, to stop the light shining in my eyes, but we soon discovered that the peak of my cap got in the way when drawing back the bow string. However, when I took my cap off, I couldn’t look towards the target because the sun was in my face. (The end of February and the sun was shining! Welcome to Scotland!!)

The best thing for me to do now was for me to turn my face away from the sun, (and the target). This, apparently, is a tad unusual. I was told that most clients face the target. Strange!?! 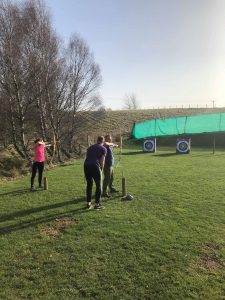 After a couple of shots, under Ashley’s guidance, Dan suggested that when I drew back the string, I should select a reference point on my face, (a set point to bring the string back to). Normally this would be around the cheek bone, but as I wasn’t looking where I was firing, Dan suggested that I bring my top finger back to the right side of my chin. Bingo!

Now I had a set reference point, I could start to concentrate on my other hand. This is where Ashley showed his skills.

Operating me a bit like “Bernie the Bolt”, (old-time TV reference, see the internet), Ashley guided me up, down, left, right, and fire. Then he would tell me where the arrow landed, by using a 0-10 scale, such as 4 from the bottom and 7 from the left. (When I write it here, it looks a bit complicated, but on the day it worked a dream! 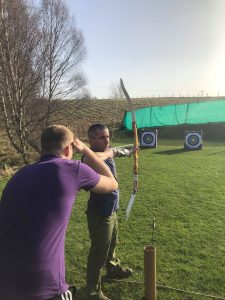 By the end of the session, I had scored more than Rhona, but I put that down 100% to Ashley and his perfect guiding!

Teaching archery to a blind guy is not that easy, and I think many people would probably be stumped if faced with this situation, but Ashley and Dan showed their true skills, and took it all in their stride, making it a very enjoyable experience!

I had suggested that I’m pretty good at pointing directly at noises, so if one of them wanted to stand behind the target and call out, I may have a better chance of hitting the target, but for some reason they ducked out of that one!! 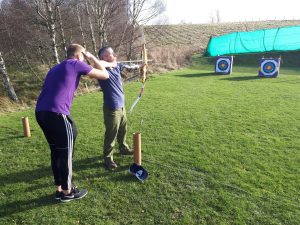 Thanks again Craggan Outdoors for an awesome day!! 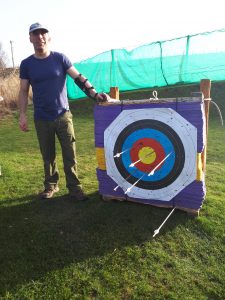 Rhona and I were so busy enjoying ourselves, that we didn’t take many photos. So apart from the first 2, the rest are all courtesy of Craggan Outdoors. Thank you.