Not being a lover of the heat, Australia, although being a wonderful place full of wonderful people, was pretty hard work. This meant that we spent as much of our time either in or on the water.

We’d been in Margaret River, south of Perth, for a day or so and had been searching out some cool things to do. Rhona had done a bit of windsurfing in the past and had told me that I should give it a go. So whilst looking in the local tourist information centre, we came across a brochure advertising a local windsurfing teacher. His name was Simon Peters, and he ran a company called Margaret River Kitesurfing & Windsurfing. We gave him a bell and arranged to meet up the following day. 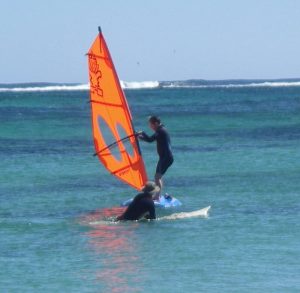 We met up at a beach car park and swapped notes. Rhona explained that she had done a wee bit of windsurfing, but that I was a complete novice. With this in mind, Simon produced “Big Bertha”!

“Big Bertha” was a windsurf board which is designed for the complete beginner. It was about the same length as a regular windsurf board, but about 3 times the width. The idea was that with there being a larger area on the water, there was less chance of tipping, so the rider could spend more time concentrating on the sail, than on trying to stay on the board. (That was the theory.) 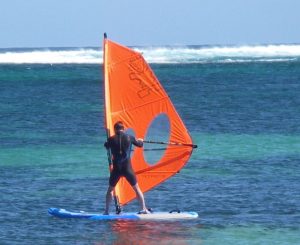 After getting all the kit down to the beach, I was knackered. It wasn’t that the kit was heavy, but more that the temperature was really high. Once everything was on the beach, I had to take a quick dip to cool off. This gave Simon a few minutes to assemble the windsurf and get ready to start the lesson.

We were taken through the normal bits – what each bit was called, what it does, what we do if x happens, etc – and then we were down to the water. Rhona and I were to take turns, so as to get 1 to 1 tuition. Rhona let me go first, while she chilled out on the almost empty beach. 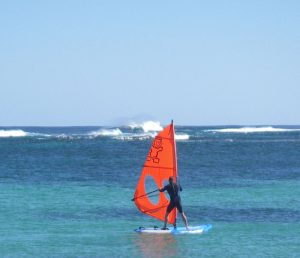 We took Bertha out into waist depth water, and I climbed aboard. As I said earlier, this board was designed not to tip easily. Also, as I have done a fair bit of board sports in the past, (surfing, mountain boarding, skateboarding, snowboarding and wakeboarding), balance shouldn’t really be a problem. Wrong!! How could something so wide be so tippy, or should I say how could “I” be so crap!?!

Eventually, after several attempts, I managed to find my balance and get started on the sail. Simon explained how I should be standing, catching the wind in the sail, arms and shoulders in the right position, knees bent, etc. Again, this didn’t really come very naturally, but I was eager to learn. Within 5 – 10 minutes I seemed to have picked the basics up. I positioned myself as instructed, pointed the sail in the direction I was told to, and I was off!! Not very fast at first, but I was definitely moving. As I relaxed into it, the speed picked up. Simon was swimming along side on his surf board, giving instructions, etc. 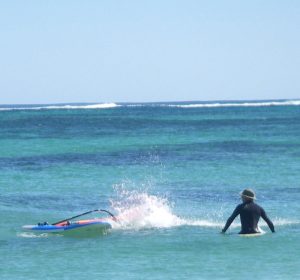 We had travelled around 50 metres in about 15 – 20 seconds. That wasn’t going to break any speed records, but it felt bloody great!!

Simon then suggested that we stop there. I was to swim back on his surf board and he would ride the windsurf back to the start point, where Rhona would then take her turn.

As she had done this before, it didn’t take long to get back into the swing of things, and she was flying off down the beach, doing turns, etc. This gave me a chance to try and work out the mechanics of the sport in my head, and also to cool down in the sea. 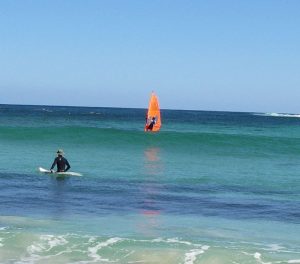 We had booked a 2 hour session, and would take turns every 20 minutes. By my third and final session, I had learnt how to turn, run into the wind,retrieve a fallen sail, and a few other things.

For me this had been a great way to learn the basics of a new sport, and for Rhona it was a chance to re-visit an activity she had enjoyed in the past.

I’d like to think that windsurfing is something I’ll get to do again, but without “Big Bertha” I wonder how easy it will be for me to pick up again. 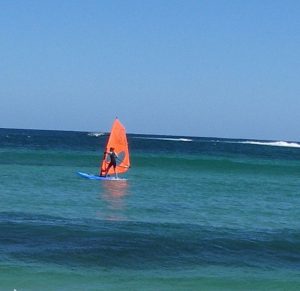 If you are in the Perth area of Western Australia, and fancy having a go at windsurfing, I would highly recommend that you contact Simon Peters at Margaret River Kitesurfing & Windsurfing.