Mountain biking has been going for years, and as a registered blind guy, I always thought it was one of those sports I would never be able to do. I have spoken to some of my blind and partially sighted friends who have done tandem mountain biking, and the reports were generally negative. Hitting bumps and sore bums from not being able to stand up on a tandem, all made an uncomfortable time. 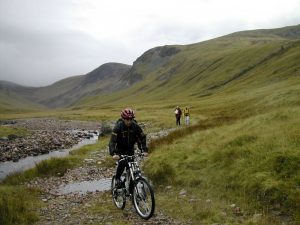 In 2005, Rhona and I were in training for the Hebridean Challenge, and due to this we were spending a fair bit of time apart. Apart from the tandem road biking, Rhona would be running in the hills and I would be swimming in a pool or loch. I thought this would be a good time for me to have a go on Rho?s mountain bike and try to cycle along side her for some of her more flat running. We chose a quiet off-road track between Blairgowrie and Dunkeld. I cycled just behind Rho for a bit, and then when she went off to hit the hills, I decided to have a go on my own. Going very slowly, and only being able to see the ground immediately in front of my front wheel, I set off. I travelled a round route of around 4 miles. Apart from riding into 2 gates, hitting several rocks and falling off into a few ditches, all went well! Hang on a minute, it didn?t go ?well?, it was truly awesome!! I was on a bike on my own and having a ball!! I hadn?t done this since I was a wee boy and now I was hooked! 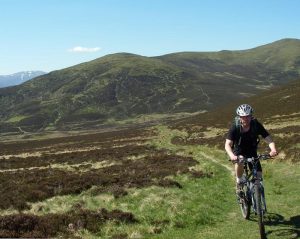 However, as the Hebridean Challenge was only a few months away, I decided to hold the mountain biking off until after the competition. I couldn?t afford to take time off for injuries. (Little did I know about the upcoming cracked ribs, swollen knee and appendicitis, all without mountain biking). In August, after completing the Hebridean Challenge, I started back at the mountain biking, covering the same track I had ridden earlier in the year. Going by memory, I managed to stop before hitting the gates, but still came off a few times. Not to worry. 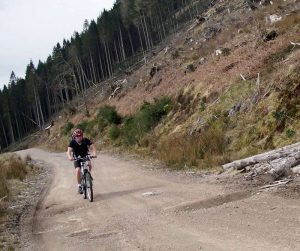 Colin (from our Heb Challenge team) invited Rhona and I out for a mountain bike ride. I was a bit reluctant to start off with, as I know I go pretty slow, and for most people my bike trip would be very boring. Anyway, I went for it and had a great time! There were a few occasions when Colin suggested I should get off the bike and walk with it, but of course, I knew better. Then, once I had climbed out of the ditch, pulling heather from where you don?t want heather, and picked my bike up, I decided it was probably a good idea to walk with the bike. 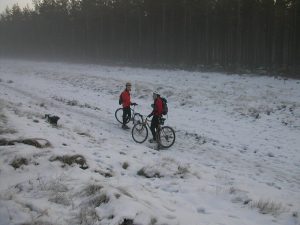 Since then, I have bought myself a mountain bike with front suspension (which is definitely needed, for when I hit gates, trees, rocks, etc). I have had an awesome time, and on some stretches of track, I can pick up the speed and feel the wind in my helmet! Before people start shouting about being a danger on a bike, I only open up when I have friends in front of me, telling me if people are coming and where to go. 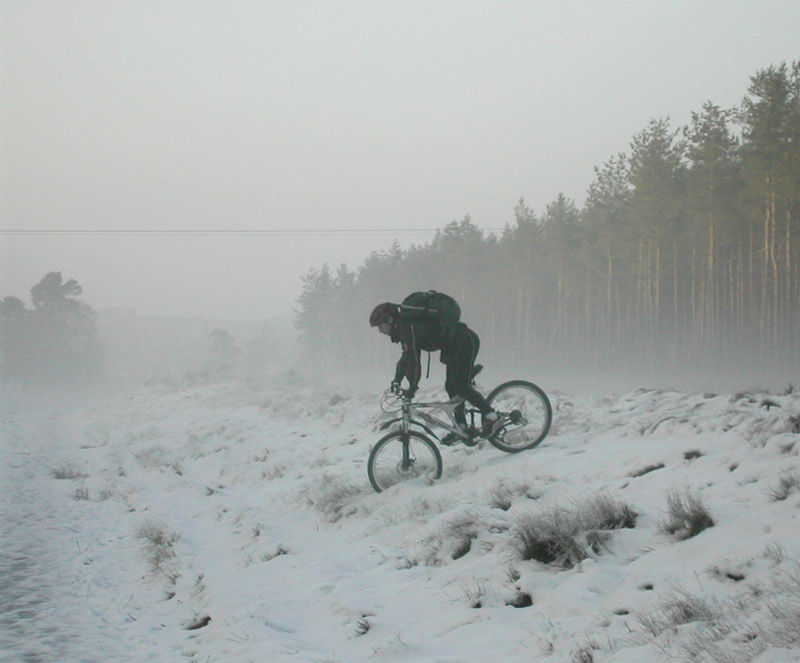 Whilst snowboarding in New Zealand, the local Ski Patrol issued me with a vest, to wear on the outside of my clothing, with BLIND SKIER printed on it. I am now thinking about getting one to wear whilst on the bike, but not sure exactly what to put on it. BLIND & DANGEROUS seems to be a popular suggestion amongst my friends. 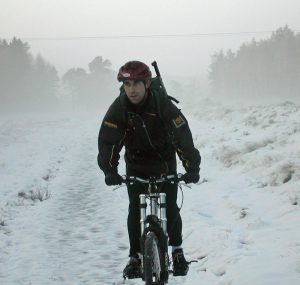 We recently had 2 of my old school friends come to stay with us. Geoff is partially sighted and does lots of cycling, and Steve has similar eyesight to me, and has not been on a bike for years. We went off to the track I use and had a good ride. Unfortunately, on the way back, Steve?s confidence proved to be greater than his ability and he went faster than he should. It was whilst doing this that he hit a rock and flew off over the handlebars, landing on another rock and breaking his arm, just below the elbow!! Ouch. Although now having a forearm full of pins and wires, Steve has not been put off mountain biking and hopes to do it again on his next trip to see us! 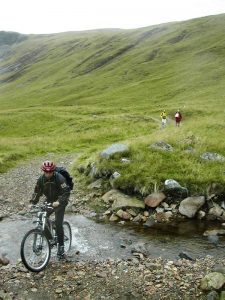 In April 2006, a group of us mountain biked the Great Glen Way, (approx 80 miles), from Fort William to Inverness. This is a great trail with a mixture of tarmac and off road biking. Some of the tracks, through the forests, were extremely steep, but according to those who could see, the view was well worth it!!

It took us two days, and was an awesome cycle. I would highly recommend it, but would advise it is not for the unfit. Along with the hard cycling, we also had 2 pull-outs. One was due to some damage received their bike and another was due to a leg injury caused whilst cycling.

Due to the severe strain on my limited vision, I suffered headaches and some sight loss for 2 days afterwards. However, this is the price I pay, and I’m not particularly bothered by it. As they say “it goes with the territory”.

We cycled in both glorious sunshine and in pouring rain, but most of the time the wind was behind us. All in all, it was a great weekend and thank you to everyone who tollk part!! 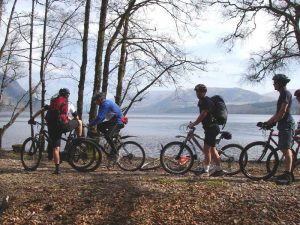 As you can see from some of the pictures above, we are not just fair-weather mountain bikers. We really enjoy this sport!!