Snorkelling – an extreme sport? Maybe not. Throw in a sit on kayak, strong head winds, waves, a turtle, a couple of sharks, the world famous Ningaloo Reef and you certainly have the makings of a mini adventure! 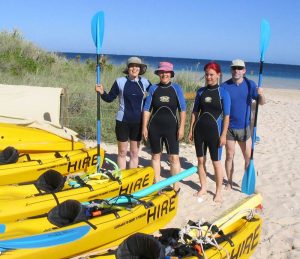 In March 2006, Rhona and I were in Western Australia for a wedding. (Amy and Tony ? see canyoning in Ecuador.) The wedding was being held in Coral Bay, so we decided to have 5 days there. Coral Bay is a small town on the Western Australian coast, next to the amazing Ningaloo Reef. We have all heard about the Great Barrier Reef on the Eastern coast of Australia, but there are 2 main differences between Ningaloo and the Great Barrier.

Firstly, Ningaloo is a hard coral reef and the Great Barrier is a soft reef. This means that Ningaloo is not as brightly coloured as the Barrier, but is probably just as impressive. 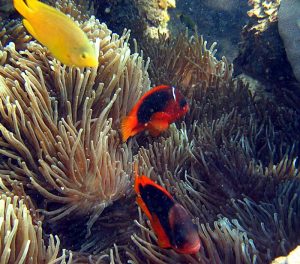 Secondly, and for us, more importantly, Ningaloo is located just off shore. I have spoken to many people who have been to the Great Barrier Reef and they all tell me that they had to take a boat trip of an hour, or more, to get to the reef. Ningaloo Reef is a short swim from the shore. In some places it is only 50 metres from the beach, however the best parts are around 400 metres out.

Ningaloo Kayak Adventures are a small company from Coral Bay who offer guided kayak, (Cabo-Ocean, double sit-on, kayaks), trips out to the best parts of the reef to snorkel with turtles, reef sharks, rays, snappers, etc. 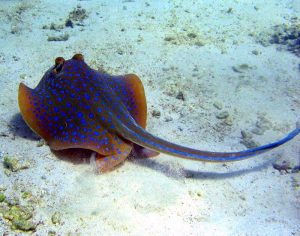 We booked our trip for the morning of the 24 th and met up with Graham and Kurt, from Ningaloo Kayak Adventures, and Mandy and Fiona (the mother and cousin of the bride – Amy). As the wind was fairly strong, it was agreed that Graham would team up with Mandy, Kurt would team up with Fiona and Rhona and I would work as a team in our kayak. As we have done a fair bit of kayaking in the past, this trip should be a doddle. 15 minutes into the paddle and Rhona and I were knackered!! It is one thing paddling down a river or across a loch, but paddling into a strong head wind, with waves crashing over the front of the boat and the tide against us, now that is completely different! Graham had been trying to help guide us, but decided it would probably be quicker if he threw us a line and helped tow us to the spot. 5 minutes later, we were there. 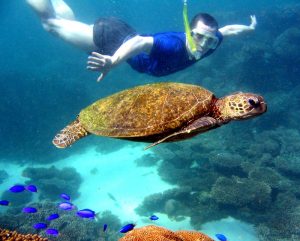 We tied the 3 kayaks up to a buoy, and entered the water. The water was so clear and warm. After getting our fins, masks and snorkels on, we headed off behind Kurt to the first spot .

As we swam along, Kurt would point out things of interest, including brightly coloured Tetras, shoals of Snappers, Trevally, Clownfish, Parrot Fish, Wrasse, Puffer Fish, white and black tipped reef sharks, and the odd Blue Spotted Lagoon Rays going along the sand below us. 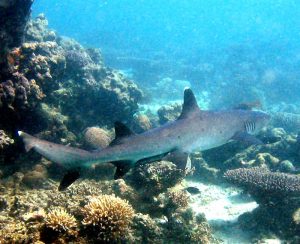 The water was around 8 metres deep, but you could see everything. (Well, so I was told afterwards.) When Kurt would see something, he would stop swimming and point to it. This was my cue to dive down in the direction he was pointing. I would take a breath, dive down and then spend the next few seconds thinking, ?What am I looking at?? There was the odd occasion that I did work this out, but hey, what do you expect from the blind man?

As well as pointing things out, both Kurt and Graham were taking lots of pictures, to be put on a disc, with an option for us to buy the disc, or not. As there were 2 of them, this meant we ended up with a disc of around 100 pictures!! We bought a disc 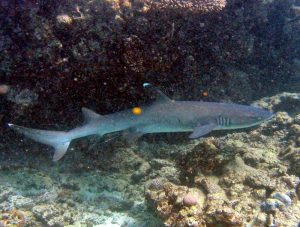 Graham had told us earlier that it was likely that we would see turtles and sharks, but obviously he could not guarantee this. Whilst swimming, Kurt would occasionally take a dive and search around the coral. Sure enough on 2 trips down, Kurt found some reef sharks. They were hiding in coral and only came out as we swam away. Rhona and I missed them, but Mandy had them swim up near her. These sharks are only about 1 metre long, so we were not in any danger.

Later on in the swim, a turtle joined us. He seemed to be just as interested in us as we were in him. He spent about 10 minutes swimming amongst us and did not seem the slightest bit nervous. 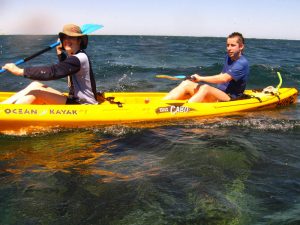 After an hour and a half of snorkelling, it was time to climb back into our kayaks and head back to shore. This should be an easier paddle, as the winds should now be behind us. Wrong!! The wind had changed direction and was now blowing against us, again!! With a little help from Graham, and a mighty effort, we headed back in to shore.

What an amazing trip!!

All of the pictures above, were taken by Graham and Kurt on our trip.

Ningaloo Kayak adventures are the guys we went with.