Cliff jumping is exactly what it says. You find a cliff, and guess what, you jump off it!! (Preferably into water!)

Now if you don’t know what you are doing, you will soon find yourself in the back of an ambulance on your way to the hospital, (if you are lucky!). That is why I chose to cliff jump with “Nae Limits”. 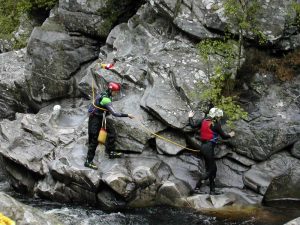 Nae Limits are an extremely enthusiastic company. They are not happy only to offer the usual range of activities, white water rafting, canyoning, skiing, etc, but are continually looking for something new to offer. They are very keen to promote extreme and adventure sports. Not only do they offer a fantastic range of activities, but they also provide you with top quality equipment and instruction. The general rule with watersports is that you are provided with a wetsuit, but need to supply your own footwear. Not only did I get a wetsuit that looked like it had just come from the shop, but I was also given neoprene socks and booties! I was not going to get cold!! It is little things like this that make a big difference. 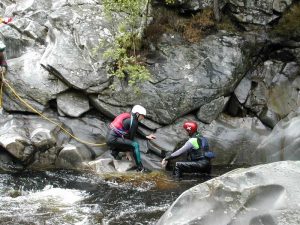 John is one of the owners and the main instructor/guide at Nae Limits. This guy does not give much away about himself, but I later found out that he has competed at international level in white water sports and on the ski slopes. Working with John, is “Biscuit”. This guy does not have a negative word in his vocabulary. He is full of encouragement and enthusiasm, and has a wide range of experience within outdoor activities. With these two guys on your team, you are in very safe hands!! 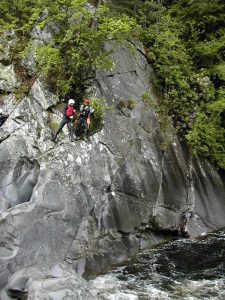 On the day of the cliff jumping, we met up in a carpark near Dunkeld and headed off in convoy to the jump site. Once there, we were kitted out with wetsuits, socks, booties, buoyancy aids and helmets. From here we went down to the river to have a look at what we were about to do.

Unfortunately, it had been raining very heavily at the time, so the first job for John and Biscuit was to check the level of the river. They decided that we would start off with the waterslide and take it from there. 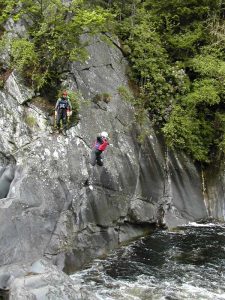 The waterslide comprised of a large smooth, sloping rock and a tarpaulin. The rock was situated on the other side of the narrow river, so we waded/swam, in a line, over to it and got ourselves ready. The tarp was spread out over the rock and some water was poured over the tarp, to give extra slide. Each of us had to climb up the slight slope to the top of the slide using a rope. Once there, we sat down, about 4 metres above the water, and slid down one at a time. At the bottom there was a pool to splash into. This was a great way for everyone to get used to the cold water. Some of us even had a go at going down head first and diving into the water at the bottom! 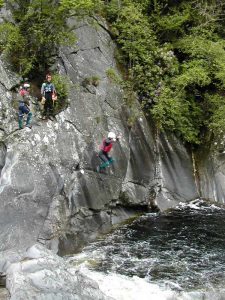 After a few goes on the slide, it was time to go and check the jumps out. First, John and Biscuit had to check that the river was at a safe level. Once this was sorted, we were instructed on how to jump and land. You can’t just throw yourself off the cliff and hope to land properly. So we were all shown the correct technique. Soon it was time to practice our jumps.

We started with some small jumps from around 2 metres above the river. From here we progressed to around 5 metres. This was a bit more daunting for some of the others, and a couple of them decided that this was high enough for them. There was no pressure for them to go any higher, and they were very happy with what they had achieved. 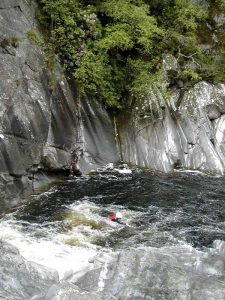 For the rest of us it was onwards and, most definately, upwards. The next and final jump for us would be from around 9 metres. To some of you this may not sound too high, but standing up there, on the cliff at that height with the sound of the water crashing around below you, it does get the adrenaline flowing! All I can say about that jump was, it was great to get in the water! It just felt really great leaping off into nothing and waiting to hit the water. Everyone who did the jump was completely buzzed up. 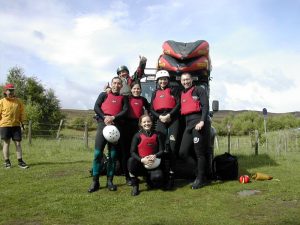 When the weather is better, Nae Limits offer a big cliff jump. This is around 20 metres above the river. We saw the jump, but were advised by John, that it would be too slippery for us novices. It did look high, especially when John and Biscuit jumped off! In better weather conditions this jump is offered to anyone who can jump well. Maybe next time that will be me.