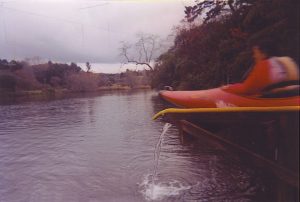 We popped into the Waimarino Adventure Park to see what they had to offer. I had heard that they had all manner of activities available. From climbing walls to kayaks. On arrival, we met the owner’s son, Blair, who was full of enthusiasm and we immediately felt that we had come to our sort of place.

We hired a couple of kayaks and were driven to the put in point about 11km up river. After a leisurely paddle back, Blair invited us to have a go on the kayak slide. 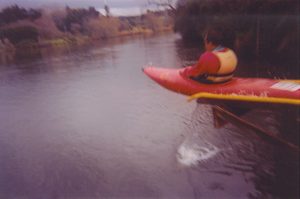 This is possibly the only purpose-built kayak slide in the world.

It is around 75 metres long and is mostly meant to be used as a normal water slide, i.e. for people to sit on a mat and slide down. But the last 20 metres or so, is designed to take a kayak! At the end of your shortt ride, you shoot out into the river, from a height of about 2 metres!

Rhona and I both had a go on the kayak slide facing forwards. I was then persuaded, by Blair, to have a go backwards. That was a lot more scary, but a lot of fun. 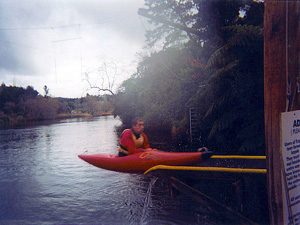 We had a superb day and would recommend a visit if you are ever in the area.

We left Waimarino Adventure Park with some great memories, a car sticker, (which is now in pride of place on Rhona’s car) and a great saying which we have stolen from Blair