Before I wrote this article, I had a bit of a tug of war with myself over whether to write it or not.  This was not because I had some sort of a negative experience, (definitely not the case), but because I feel the Lamlash Splash is one of Scotland’s swimming “best kept secrets”!  With only around 40 swimmers allowed to participate each year, I thought maybe I should keep my mouth shut, (or maybe that should read “keep my typing fingers in a boxing glove”), and keep this great secret to those in the know.  As you can see, the show-off in me won the tug of war, so here I go.

The Lamlash Splash is a 1.3 mile, wetsuit, sea swim from Holy Isle to Lamlash on Arran.  As I had recently gone over to the “dark side”, swapping my swimming shorts for a full neoprene wetsuit, it looked perfect for me. 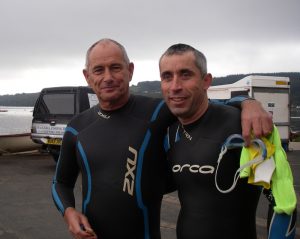 Eddie and Deano before the swim – dry socks

The Lamlash Splash has, in previous years, been an extremely rough swim to complete, and should not be taken on lightly, or without some sea swimming training.  I have friends who swam in 2011, and they came back with all sorts of horror stories about the weather and water conditions.  Waves bigger than houses and winds that could fell a mighty Oak!  (OK, so that might be a bit of an exaggeration, but for the millionth time …)  Last year, 2012, the conditions were better, but still a little bumpy.  Just 6 days before this years’ swim, the ferry service from the mainland had been cancelled due to rough sea conditions.  What was 2013 going to be like? 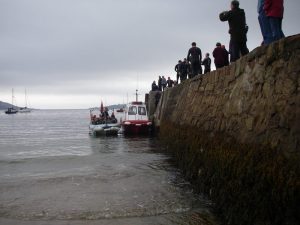 Everyone aboard teh Skylark!

As with my “Monster Swim”, Eddie “the Socks”* Riach, (formerly known as “Eddie the Fish”), had agreed to be my guide.

The swim was due to start at 11am, so we, Rhona, Eddie, Stumpy, and I arrived around 9.30, to check things out.  The masochist in me hoped that some of the waves from the previous weekend may have lingered, but it was not to be.  The water was super flat, and in fact, the organisers said that it was probably the flattest the sea had ever been in the 12 year history of the Splash!  Darn you Mother Nature!

However, Mummy N was not totally on the swimmer’s side.  Instead of winds and waves, we would have jellyfish to watch out for!  A lot had been spotted over the previous days, and this was pointed out in our safety briefing. 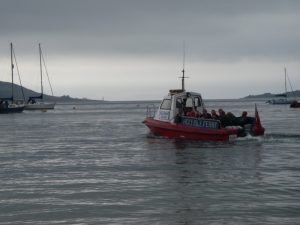 No turning back now

After the briefing, the swimmers piled into the 3 boats waiting to ferry us across to the starting point on the Holy Isle.

The mood in our boat was excellent.  People were nervous, but in good humour.  Talk about the jellyfish was rife, and the odd mention about the water being just 12 degrees was also mentioned.  Our boat was made up of experienced swimmers and complete novices.  Some were looking to do a great time, others were just hoping to complete the swim.  A mixture of competitors and completitors. 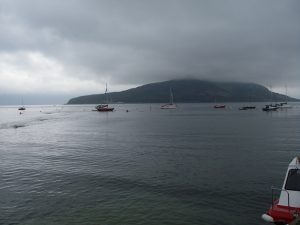 On arrival at Holy Isle, we clambered out of the boats, and converged on the pier.  As the pier filled up, some brave souls dived into the water for a bit of acclimatization.  Eddie and I agreed that there would be no need to enter the water before we really had to.  However, after a few minutes of watching the others, we dived in.  At 12 degrees, it was a tad chilly, even in neoprene!  We didn’t want to hang around, with the agreement of our very own safety kayaker, Gary, we set off. 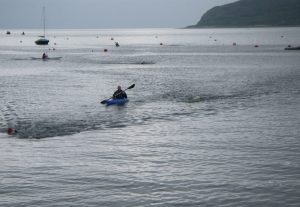 Gary watching over Eddie and Deano

Over the next 36 minutes and 35 seconds, all I could see was Eddie’s yellow socks.  The water felt pretty calm, but the pace was relentless.  Bearing in mind that my guide, Eddie, had turned 60 earlier this year, and was currently suffering from 2 shoulder injuries, I still had trouble keeping up with him.
I was totally oblivious to other swimmers overtaking us, (10 in total), as well as the jellyfish that Eddie so kindly swam me around.  However, I was not oblivious to the warm welcome given to all of the swimmers, by the supporters waiting at the finish line on Lamlash pier.  It was made even warmer when we were given our lovely hot soup and a roll! 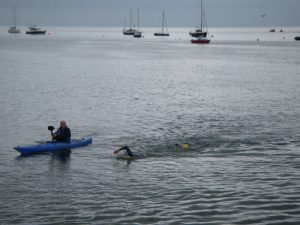 The Lamlash Splash is a wonderful event, and I believe this is down to a combination of great organisation and limited participation places.  Long may it continue!! 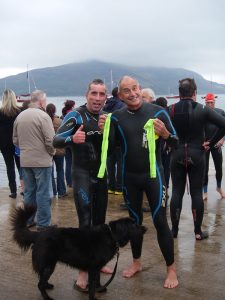 *If you want to know about the socks, check out MONSTER SWIM