In late Summer of 2012, I received an email from Paddy Yeoman, of Ultra Air Ltd, inviting me for a flight in a microlight.  As we would be taking off from the Buckminster Gliding Club airstrip in Nottinghamshire, England, and I’m based in Perthshire, Central Scotland, (around an 8 hour drive away), we couldn’t just pop down for a day trip.  So, diaries were checked, and plans were made.  The result was that we would meet up on Sunday the 28th of April, 2013, whilst on a short trip south of the border.

I had never been in a microlight before, but had seen them on the TV.  They looked a little like something from a James Bond film, with hang-glider wings above an open cockpit and a propeller at the front.  I hoped that when we did our flight the weather would be kind, as I was going to be fully exposed to the elements.

A few years earlier I had had a go at hang-gliding.  The weather had been nice, but when we got airborne, I was freezing.  The microlight was likely to be travelling at a greater speed, (up to 100 knots), and possibly at a higher altitude.  Thus it was likely to be much colder.  So, I was fully prepared with a bag full of winter clothing.

However, when I met up with Paddy, still wearing my shorts, he told me that I wouldn’t need to change.  He even told me that if I got cold, he could put the heating on.  Heating, in an open cockpit?  Was I missing something? 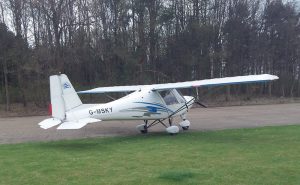 Paddy showed me around the aircraft, explaining what everything was and how it all worked.   This took 20 minutes or so, and shortly after I found myself strapped into my seat, whilst Paddy went through his pre-flight checks.

After these were completed, we drove along to the runway.  Paddy had his pre-take off chat with the air control chap, and we were given clearance to take off.  A minute or so later, we were motoring along the runway, and then we were airborne. 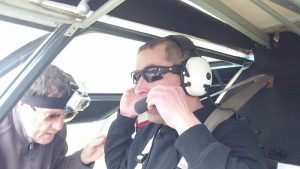 Paddy had positioned us in a thermal, and by flying in small circles within this thermal, sure enough when he switched off the engine we continued to climb!  Awesome!  We were still going up, but using absolutely no fuel!  For a tight Scotsman like myself, anything for free is a bonus!!

Over the next 15 minutes, Paddy had control of the microlight, but I was encouraged to put my hands loosely on the controls, so I could feel how much or how little they needed to be moved, in preparation for when I took over.  After this, I was given control of the aircraft and spent around 20 minutes of the flight in full control.

For a lot of this time, I kept my eyes closed.  This wasn’t through fear, but was so that I could feel how the microlight reacted to my moves, and hopefully do a better job.  I found if I tried to rely on my limited sight, I would get things very wrong.  For example, I tried to focus on the horizon to keep us level.  The way this is usually done is to make a mental note of how much of the horizon is visible when the aircraft is level, and then make sure this doesn’t change much.  However, I couldn’t work out how much horizon was visible, so couldn’t keep it the same all the time.  I had to close my eyes and when Paddy told me we were level, I had to try to remember how that felt.  It didn’t work all of the time, but did some of it.

It seemed like we had hardly been in the air when Paddy said it was time to head back down.  However, we’d been up there for an hour!  It was fantastic, and if you’ve ever fancied flying a microlight, I’d highly recommend contacting Paddy Yeoman at Ultra Air Ltd.  I had a fantastic time, and would really like to do it again! 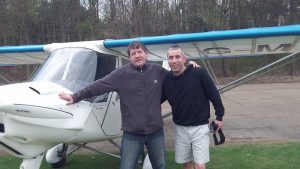