This was the third and final bungy jump of the day. We had left the hostel at 8 o’clock that morning for the first bungy jump. It was now 7 o’clock and we had had a very busy and high adrenaline day.

The Ledge Bungy is situated on top of a hill, 400 metres above Queenstown. To get to the top, you take a small cable car. The view from here is spectacular. 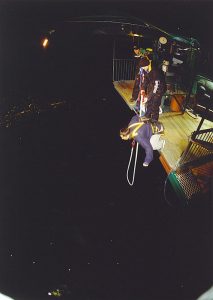 This was the first night bungy jump I had done, and the lack of light definately made a difference. The Ledge Bungy jump is different to all the other jumps that I have done before. Instead of the usual ankle straps, you wear a harness, simillar to the one worn when rock climbing and abseiling.

And instead of a standing dive, you are supposed to take a run at it. The jumpmaster decided that in my case, having poor sight, a standing jump would be safer. He was worried that I may not see the edge in time. I agreed. 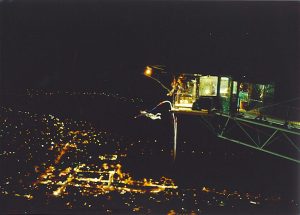 So with some trepidation, I went for it! Leaping out into the wintery, dark night air was breathtaking. The drop is only 47 metres, so is over very quickly. Hanging there, waiting to be retrieved, silently, above the lights of Queenstown was really magical. A great end to a fantastic day!